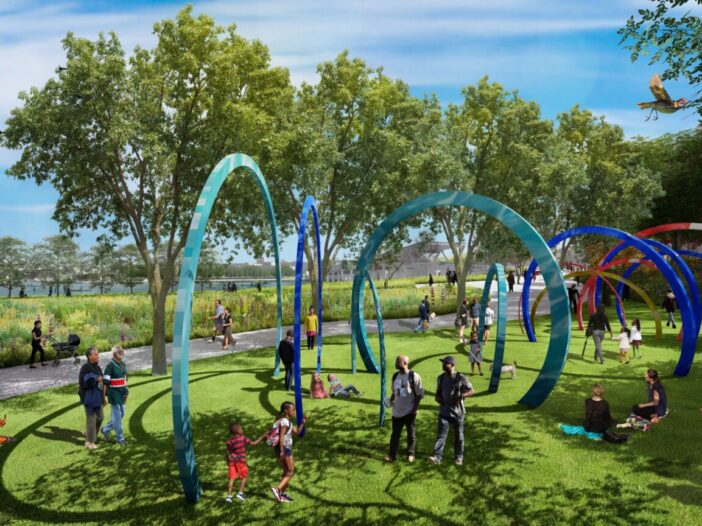 A mother-daughter artist duo was selected by a panel to build a public art piece made up of multicolored arches at 11th Street Bridge Park.

Martha Jackson Jarvis and Njena Surae Jarvis will create the first of five artworks to be commissioned for the park. Located on old concrete piers along the Anacostia River in Ward 8, 11th Street Bridge Park is set to become Washington, D.C.’s first elevated public park. The artwork set, titled “Anacostia’s Sunrise/Sunset Portals” will serve as gateways to the entrance of the park and is slated to open in 2025.

The piece imitates different portals of a sunset and sunrise between the river and the community, according to Surae Jarvis.

“We want you to step off the beaten path and transport yourself somewhere else, some magical being where you are intrinsically your exit,” Surae Jarvis said in an interview with The Hoya. “As far as the sunrise and sunset, as you enter from the community entrance and move towards the 11th Street Bridge as the colors lead you through greenery, and then the palette of a sunrise as you move through the different portals, making your way from the river and back into the community.”

The use of old concrete piers along the Anacostia River in the creation of the 11th Street Bridge Park serves as an optimistic sign for urban renewal around the nation, according to Jackson Jarvis.

“It’s a beacon for the nation, that these things can be reinserted back into the community,” Jackson Jarvis said. “They can be reused in an innovative, creative way that does not cut people or communities off, but bridges the gap and becomes a real nexus for urban space.”

The park, a project supported by the D.C. government and Building Bridges Across the River (BBAR), a nonprofit supporting District residents who live east of the Anacostia River, will create over one hundred jobs and $3.5 million in income for community members.

The art and the artists represent the vision of the Anacostia community, according to Scott Kratz, vice president of BBAR, in a Feb. 16 press release.

“The 11th Street Bridge Park is a community-imagined space and it was important that the art and artists selected for our largest commissioned piece be reflective of this community,” Kratz said in the press release. “We’re ecstatic to see Jackson Jarvis Studio’s vision for ‘Anacostia’s Sunrise/Sunset Portals’ come to life and bring a welcoming energy to the park’s eastern entrance while helping expand equitable access to art East of the River.”

A group of residents, artists and community stakeholders, many of whom live near the park, selected Jackson Jarvis and Surae Jarvis’ piece, while the park’s remaining four artworks will be announced in the spring.

Jackson Jarvis has worked as an artist for over 50 years and looks to connect nature with individuals through public art sculptures.

“Public art is really very much a part of my practice as a sculptor, my interest has been the notion of public space, what is it that belongs to the commons or to all of us,” Jackson Jarvis said. “My interest in producing sculptures oftentimes talks about bridges between nature, and the kind of urban or man-built sites and spaces.”

Jackson Jarvis hopes that “Anacostia’s Sunrise/Sunset Portals” will act as a landmark for the Anacostia community and will provide something new to viewers each time they visit the park.

“This is a site that you could visit and return to season after season, year after year, and bring the children,” Jackson Jarvis said. “This is to form a communal memory, celebrating this extraordinary natural resource that we have here.”

Surae Jarvis said that sculptures will mark a space in which the members of the Anacostia community can create their own experiences in connection with the art and each other.

“I hope that as they move through their lives, people will interact with the sculpture differently,” Surae Jarvis said. “I hope they play with their children. I hope they meet a potential date there when they’re a little older. I hope as people age their interaction will be with different pieces, and we want it to be an almost magical space.”