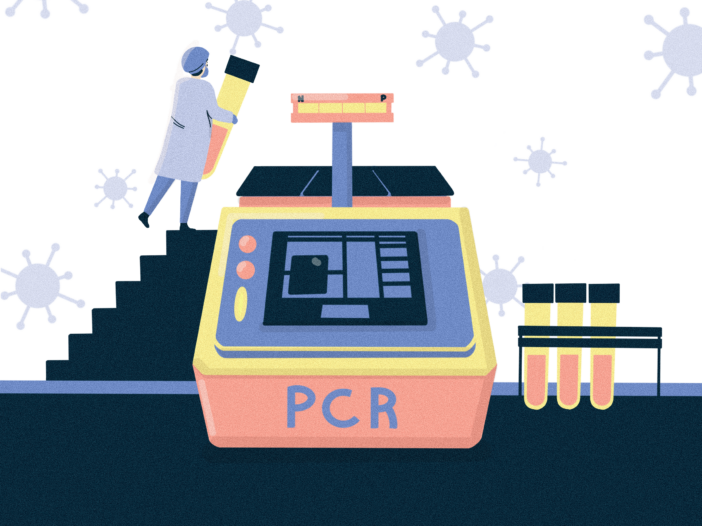 When Samantha Helffrich (COL ’22) was waiting on her COVID-19 test results from Georgetown University, she received an email from a university employee instead of a typical One Medical app notification with her test results.

The email said her recent COVID-19 test result had come back inconclusive and she should quarantine until she got tested again. Helffrich panicked.

“I was having family come visit. So I was like, ‘Oh my god, I’m gonna have to tell them to cancel,’” Helffrich said in a phone interview with The Hoya. “I thought maybe it meant that I had COVID. So I was freaked out.”

But Helffrich’s test was one of many that have been ruled inconclusive throughout the spring 2021 semester because of issues with processing in the One Medical testing sites on Georgetown’s campuses and its affiliated labs. Earlier in the semester, Helffrich had another test deemed inconclusive, as did her friend who got tested with her, she said.

“They said there was not enough sample collected — there were other interfering substances present or technical issues running the test. But I knew other people who got tested around that same time that got canceled tests, so I thought it was just a bad batch,” Helffrich said.

Since the conclusion of the fall 2020 semester, Georgetown and One Medical have implemented a series of changes in testing policies for students on and off campus, resulting in hiccups such as Helffrich’s inconclusive tests. As COVID-19 cases in the Georgetown community have increased this semester, these issues have led to unforeseen consequences, especially for students living on campus, leaving many students frustrated and concerned.

During the fall 2020 semester, Georgetown partnered with One Medical, a nationwide primary care provider, to administer COVID-19 tests on campus. Initially, all tests were conducted in the McDonough Arena, but for the spring 2021 semester, Georgetown closed the McDonough site and opened two new testing centers in the Healey Family Student Center and the hotel ballroom of the Leavey Conference Center.

At the testing centers, One Medical administrators provide patients with a swab and labeled specimen tube. Patients then self-administer the test before returning the testing kit to One Medical staff. Results take an average of 1.07 days to reach patients through the One Medical app, where students can also schedule testing appointments.

The two new centers were established as a part of improvements to testing based on student feedback, and they were chosen to safely facilitate testing in a large space, according to a university spokesperson. The new testing sites are also intended to be more accessible to students, with Saturday appointments now offered through the Leavey Center site.

The recent changes have made testing sites more organized and efficient for students, according to Syed Chapman (COL ’22), who lived on campus in Village B last semester and is now living in Henle Village.

“I do think it’s a little more organized, and they have more space to allow people to take tests and also get people registered to get their materials to take them,” Chapman said in a phone interview with The Hoya. It’s just a little more structure.”

One Medical declined The Hoya’s request for comment because of the company’s confidentiality policies.

Students living on campus, like Chapman, can access resources like Leo J. O’Donovan Dining Hall and Lauinger Library only if they test negative twice a week and complete daily COVID-19 check-ins on the GU360 app. Following these procedures grants on-campus students a green badge in the GU360 app, which they then can show to security workers to gain entry to these locations.

In the fall semester, students living in the neighborhoods also had the option of using at-home PCR tests distributed by the university, but the university has limited this program because of student feedback, according to a university spokesperson.

“At-home tests are reliant on couriers who have had disruptions and delays in services due to COVID-19, weather and surges in volume. We saw tests placed into drop box locations that had already been picked up for the day or were not being serviced for multiple days,” the university spokesperson wrote in an email to The Hoya. “These issues compromised our students’ ability to meet their testing commitments and compromised our ability as a University to keep the off-campus community safe.”

Because at-home tests are no longer widely offered, students on campus and in the neighborhoods rely on the effectiveness of the testing sites. The tests utilized at both current testing sites on campus are some of the best quality available, according to Interim Chief Public Health Officer Dr. Ranit Mishori (MED ’02).

“Our PCR tests are considered the Gold Standard of COVID-19 testing and have a very high degree of accuracy,” Mishori wrote in an email to The Hoya. “The false positive rate (how often the test says you are infected when you actually are not) should be close to zero.”

Although there are occasionally glitches with booking appointments, the on-campus testing system is overall very strong, according to Rose Dallimore (SFS ’22), who lives on campus in Village A.

“The process has honestly been pretty efficient and simple,” Dallimore said in a phone interview with The Hoya. “The people who are actually working there, like the nurses, the staff and everyone, are literally so incredible. They are so kind and patient.”

As testing transitioned to the new sites for the spring semester, new complications appeared as students began reporting indeterminate test results, forcing affected students to take a follow-up test. Many students experienced inconclusive test results during the final week of January, when an ice storm caused dozens of tests to not be processed because of “shipment service delays,” according to an alert sent by One Medical to affected students.

Anika Prakash (COL ’23), who lives in Rosslyn, Va., took two tests during the week of Feb. 1, both of which were not processed because of reported complications. For Prakash, the process of dealing with an indefinite test was especially frustrating because she relies on Georgetown’s testing facilities to protect herself from COVID-19.

“I made the effort to go all the way to Georgetown,” Prakash said in a phone interview with The Hoya. “I’m trying to be safe for my roommates and friends around me, and Georgetown was not letting that happen.”

Since January, more students have reported experiences of dealing with inconclusive tests. A second winter storm in mid-February caused an increased number of inconclusive tests, and further tests were deemed inconclusive throughout the month of March, according to several student sources.

A test can have an inconclusive result for various reasons, including transportation delays, contamination and improper collection of the COVID-19 sample, according to Mishori. One Medical was unable to comment on the number of tests with indeterminate results.

Students could also experience delays in receiving results because of differing operating procedures for the two on-campus testing locations, according to Mishori.

“The difference lies in the fact that the samples from each site go to and are processed by a different lab. The quality is the same. The tests are the same,” Mishori wrote in an email to The Hoya. “The collection materials are different because of the different specifications of the labs. The turnaround time is slightly different because one lab is local and the other is in another state.”

With such a high volume of tests conducted on campus every week, it is understandable and expected that some of them come back inconclusive, according to Helffrich.

“So much testing gets processed, like when it happens, I’m kind of like, ‘Just cut them some slack,’” Helffrich said. “But it was still kind of stressful.”

Side Effects May Vary

For students like Prakash, an indefinite test is an anxiety-inducing inconvenience, but for students who live on campus, these canceled tests yield far greater consequences. Without two tests per week, students on campus can no longer obtain their green badges that give them access to university buildings.

Current university policy dictates that an inconclusive test is treated like a positive test. As a result, any student who receives an indeterminate result is forced into mandatory self-quarantine until they take another test that comes back negative. If the second test comes back positive without the student showing symptoms, a student must continue to isolate for 10 days, according to Mishori.

Although Georgetown and One Medical cannot disclose the number of inconclusive tests, COVID-19 cases on or around Georgetown’s campus have increased greatly compared to the fall 2020 semester.

This semester, off-campus outbreaks have eclipsed on-campus cases, with 344 students in the Georgetown, Burleith and Foxhall neighborhoods testing positive since Jan. 3 compared to only 61 students living on campus during the same time period. In the weeks from Feb. 21 to March 6, 78 of the reported 111 positive COVID-19 cases came from the neighborhoods surrounding Georgetown.

For students living on campus, like Dallimore, it can be difficult to watch the behavior of students living in the neighborhoods. Increasing COVID-19 positivity rates and the effect of policy around indeterminate results have a material impact on campus life, according to Dallimore.

“It’s a little frustrating for those of us living on campus to be a subject to the fact that positive tests increasing in the neighborhoods leads to services for on-campus students being reduced or shut down,” Dallimore said.

One such impact came March 3 when Provost Robert Groves announced that Georgetown would continue the suspension of hybrid courses for undergraduate students because of an increased number of COVID-19 cases both on and off campus. Hybrid classes had originally been suspended Jan. 28 for both undergraduate and graduate students after an uptick of 87 COVID-19 cases from the week of Jan. 17 to the week of Jan. 24.

While it would be ideal for students to have access to on-campus spaces like Yates Field House or Kehoe Field, to some students, like Dallimore, there is still a present concern over COVID-19 safety in the community.

“It would be very nice, and I personally would love it if the gym was open, but I wouldn’t feel safe enough going,” Dallimore said. “I’m not sure that I trust individuals to be super safe in their equipment usage.”

The lack of mutual trust between students, especially between on- and off-campus students, is a recurring theme, and problems with COVID-19-related restrictions often lie more with student behavior than with the various testing hiccups, according to Dallimore.

“I think we’re very lucky to be able to have the capacity to get tested twice a week,” Dallimore said. “Unfortunately, people just simply need to follow the protocols, and I think that is much more of an issue with the off-campus students than the on-campus students.”

Especially as the kinks are worked out of Georgetown’s testing centers, students must trust each other and work together to stop the spread of COVID-19, Dallimore said.

“Honestly, a lot of us have a lot to lose, being here. And so it’s super important,” Dallimore said. “We need to rise to the occasion and take care of each other and ourselves in the process, too.”