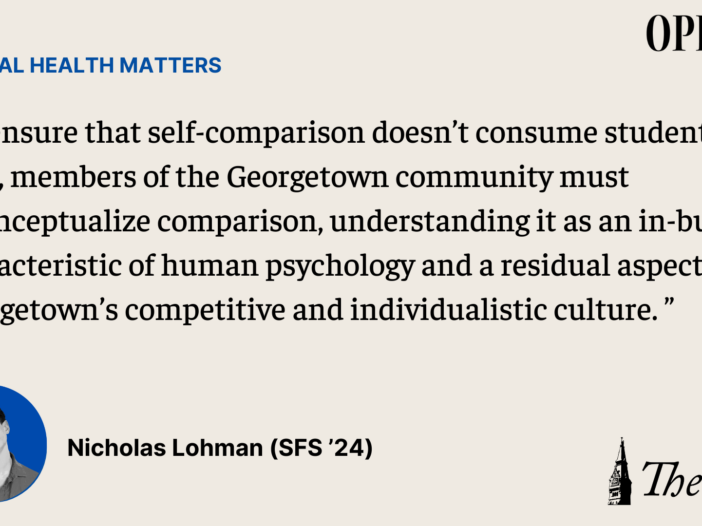 “Accept where you are.” “Be your own best friend.” “Be grateful for what you have.” These are just a few of the adages designed to help individuals combat the so-called “thief of joy”: comparison. While numerous, these refrains are only useful to Georgetown students insofar as they make for cute Instagram infographics; they do little to curtail Georgetown’s pervasive culture of self-comparison. The truth is gratitude and contentment do not come packaged in slogans.

Rather, to ensure that self-comparison doesn’t consume students’ lives, members of the Georgetown community must reconceptualize comparison, understanding it as an in-built characteristic of human psychology and a residual aspect of Georgetown’s competitive and individualistic culture. This attitude shift will protect students from the harms of self-comparison by enabling them to distinguish between their internal values and Georgetown’s cultural expectations.

Psychologist Leon Festinger’s 1954 Social Comparison Theory asserts that an individual forms their self-image based on the comparisons and judgements they make of those around them. As such, Festinger explains that self-comparison is simply a biological process that allows humans to better conform to group norms, identifying their relative abilities. However, while comparing oneself to those with a similar or higher aptitude for certain abilities can be beneficial for ‘self-improvement’ — for example, inspiring increased fitness or resilience  — it can simultaneously destroy one’s self-esteem.

In fact, symptoms of anxiety and depression often emerge from a feeling of “relative deprivation”: one’s lack of academic and professional success, wealth or beauty in comparison to others creates a feeling of inferiority and, ultimately, mental distress. This is supported by a 2020 study on women with fibromyalgia, a musculoskeletal pain disorder, demonstrating that patients who contrast themselves rather than identify with healthier patients experience higher levels of pain perception, anxiety and depression. The problem is that while humans can theoretically associate themselves with those they view as “better,” self-comparison tends to be contrasting rather than identifying.

The issue of upward contrasting comparisons is exacerbated on Georgetown’s campus. Research demonstrates that self-comparison is more powerful among friends, those living in close proximity to one another, and when the subject of comparison is viewed as highly relevant. Therefore, at Georgetown, where students are attached at the hip to their friends, share common and private spaces, and all seemingly strive toward the same academic, social and professional goals, self-comparison proliferates.

In particular, a striking proportion of Georgetown’s student body comes from a wealthy family background — with 21% of families in the top 1% income bracket — and the university holds a uniquely impressive alumni track record of global leaders and Wall Street stalwarts. As a result, students feel constantly bombarded by their peers’ achievements and the pressure to chase nearly unattainable standards. Research on the “Frog Pond Effect” illustrates the negative impact this has on self-esteem, as students at high-achieving schools like Georgetown, i.e. big ponds, have been shown to have a worse academic self-image than students at schools with lower academic performance levels, i.e. small ponds.

Moreover, Georgetown dispels the educational rhetoric of a neoliberal society that stresses the importance of pre-professionalism over a true liberal arts education, preparing students for elite white-collar careers. The emphasis this pre-professional culture places on individual success and competition, as students jockey for LinkedIn superiority, deems the capitalistic definition of success — power, money and notoriety — the benchmark for self-evaluation. Therefore, not only does Georgetown propagate a competitive climate that lends itself to comparison, but individuals who fall short of their peers’ “capitalistic” accomplishments feel inadequate regardless of whether they view such standards as personally inspiring. According to the logic of mental health anthropologist and Georgetown professor Arjun Shankar in his book chapter “The Campus Is Sick: Capitalist Curiosity and Student Mental Health,” this disconnect between what one feels they should care about and what they actually care about adds a layer of mental distress to those already suffering from contrasting comparisons.

Having established that self-comparison is an inevitable psychological process and identified the several ways in which Georgetown’s culture magnifies its harmful effects, it is clear that there are biological and cultural factors that make simply “focusing on yourself” a lot easier said than done. Hence, in order to limit the influence of self-comparison, students should focus on attacking the process at its root.

Reflecting on how one’s personal values differ from societal or campus values will prevent students from chasing near-impossible goals simply because external factors have deemed them relevant, a fallacy the influential spiritual author and activist Parker J. Palmer coins “wearing other peoples’ faces.” Georgetown’s club culture, or the focus on students’ on-campus extracurricular accomplishments, provides an example of the simple questions community members should start asking themselves. For instance, do club applicants find the university’s intensely competitive organizations interesting? Or do they instead complete the agonizing application process for their peers’ validation?Once students narrow their attention toward benchmarks that they find personally meaningful, the number of subjects that they find worthy of self-comparison will decrease accordingly. As a result, the frequency and intensity with which contrasting comparisons hurt students’ self-esteem will also dwindle. While entirely ignoring others’ actions and accomplishments may be impossible, this mindset change will, at the very least, lead to more intentional and selective self-comparison.