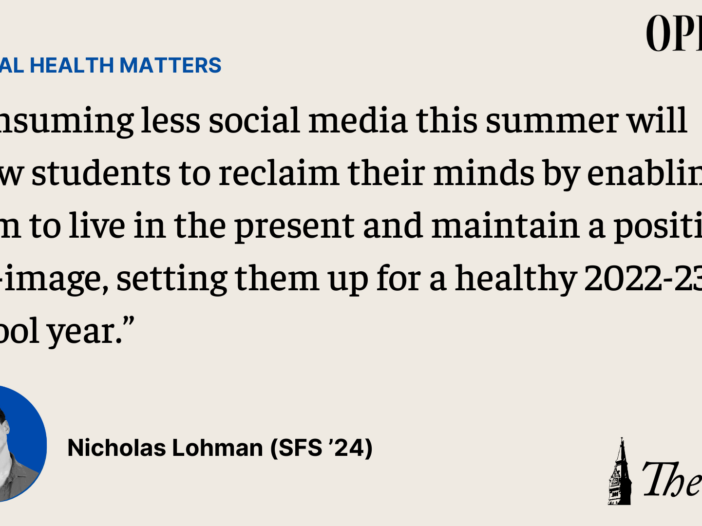 Your alarm jolts you awake at an ungodly hour, disrupting a fantastical dream and replacing it with the sense of existential dread. You quickly grab your phone and head straight to Instagram. As you fill your mind with photos of summer abroad trips to Tuscany and your friend’s OG squad from high school, you become numb to the fatigue. Crisis averted.

Social media is a crutch that Georgetown students rely on for more than just waking up. It has become a remedy for any unpleasurable emotion — the modern-day smoke break according to mental health professionals. Difficult sentences in weekly readings, uneventful scenes during common room watch parties, standing in line at The Corp or even walking to class have become opportunities to scroll through social media and escape any semblance of boredom.

Social media has hijacked users’ brains by inhibiting mindful behavior and negatively impacting mental health. Consuming less social media this summer will allow students to reclaim their minds by enabling them to live in the present and maintain a positive self-image, setting them up for a healthy 2022-23 school year.

Social media is designed to distract. If a content creator releases a one-minute TikTok, but viewers only find the first five seconds interesting, they will quickly scroll, realizing that there are infinite other videos readily available to distract them from boredom. By creating a method of escaping one’s present life — a marketplace, where instant gratification is always possible — social media companies construct what British neurologist Susan Greenfield calls “unrealistic timescales.”

Each notification, post or video causes a release of dopamine (known colloquially as the pleasure chemical) in the brain, producing a euphoric feeling. And as users become habituated to their ‘dopamine fix,’ they become less tolerant of anything that fails to yield instant pleasure, and according to Greenfield, they can develop concentrative characteristics similar to those of attention deficit disorder.

Additionally, existing research demonstrates a clearly negative relationship between social media and anxiety and depression. Between 2016 and 2020, national rates of anxiety and depression among children (3-17) grew by 29 and 27 percent respectively, and from 2008 to 2018, anxiety rates for those aged 18-25 nearly doubled. Uncoincidentally, social media use has skyrocketed over the last 15 years, and there are several causal explanations for this linkage.

When posting on social media, users search for validation in the form of likes, views or comments. The problem is that, just like gambling, the potential for validation is infinite. After receiving positive feedback, users return to the platform, hoping for more. Yet, even after receiving negative feedback, users remain glued to their accounts, believing that if they keep scrolling, they will eventually be validated. Social media creates a constant feeling of discontent — “never being good enough” — that can only be resolved through more social media use. The constant comparison that users make between their real lives and others’ perfectly curated online lives is particularly harmful. The all-too-ignored gulf between the real and the virtual promotes negative self-image at a critical time in the identity formation of college-aged students.

Indeed, consumers are suffering from an overabundance of information. The thousands of tweets, posts and stories that pop up on their feeds steal their personal bandwidth, denying them the agency to intentionally choose where they place their attention and exposing them to content that may be damaging to their mental health.

Pausing when a user has a spare moment before reflexively opening their favorite networking app will retrain their brain to tolerate boredom and allow them to become more mindful of when they use social media and what content they consume. Mindfulness, in turn, is linked to increased focus, less rumination, decreased stress, improved self-insight and better communication.

Ultimately, by taking breaks from social media, students can focus on building an identity grounded in reality rather than online. How one decides to detox from social media is evidently a personal decision, be it through deleting social networking apps, limiting screen time or simply resisting the urge to check notifications immediately after waking up. Moreover, unplugging from devices for an entire day, a deceptively difficult task, can have numerous benefits. Continuously making small efforts toward decreasing social media consumption could revolutionize how students rest their minds this summer and on the Hilltop in the fall.

Nicholas Lohman is a Junior in the School of Foreign Service. Mental Health Matters is published every other week.