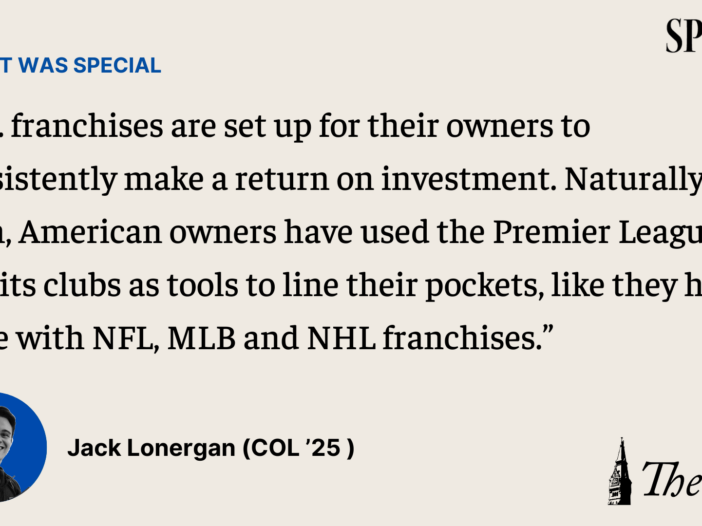 When Chelsea F.C.’s new Co-Owner Todd Boehly said he hoped “the Premier League takes a little bit of a lesson from American sports,” a collective groan permeated through English pubs and living rooms.

With Boehly’s investment group Clearlake’s purchase of Chelsea F.C. on May 28, Chelsea became the 10th Premier League club with some form of U.S. ownership. Due to the difference in operations between American franchises and English football clubs, Chelsea fans were worried Boehly would follow the trend created by those that traversed the Atlantic before him.

The trend of unwanted American revolution of English soccer first started in the early 2000s, when the Glazer family acquired Manchester United. In the following years, other Americans appeared on the boardrooms of Arsenal, Liverpool, Aston Villa and other large English clubs. They were attracted by the global nature of the sport and the success of the league, which provided — and continues to provide — lucrative broadcasting and merchandising opportunities. This coupled with the low valuations compared to American sports franchises has made Europe an attractive market.

U.S. franchises are set up for their owners to consistently make a return on investment. Naturally, then, American owners have used the Premier League and its clubs as tools to line their pockets, like they have done with NFL, MLB and NHL franchises.

However, profit does not come first in English soccer. The fans and the owners see the sport in different ways and American owners fail to understand the importance of history and tradition to the average Premier League fan. So, in Europe, profitable owners are viewed as greedy. European fans expect that there will be continued investment on the pitch, whether that means acquiring new players for millions of dollars, hiring the best in class in every department or upgrading their clubs’ facilities.

These different attitudes have created a culture clash that has simmered for a long time and recent events brought it to a boil.

One of those events was the proposed European Super League, which would have created a closed league with Europe’s most storied clubs, allowing the best teams to play each other more often and make far more money than they otherwise would have.

However, while profitable, this idea takes the sport’s best players away from domestic competitions. It denies other teams the ability to disrupt the status quo like Leicester did in 2016, and it takes away some of the best domestic cup fixtures which so often pit David against Goliath.

Unsurprisingly, three of the five members of the prospective board of the Super League were U.S. owners of Premier League clubs.

The backlash this proposition faced showed that fans are more than just “customers,” as they were described on the Liverpool owner’s website. To express their outrage over the league, fans took to stadiums in the form of mass protests. The Union of European Football Associations and even former British Prime Minister Boris Johnson stepped in to bring the proposed league to a halt.

Still, this was a dangerous wake-up call to the fact that these clubs’ fates are in the hands of a select few who see them as little more than business opportunities.

This explains fans’ quick response when Boehly suggested an all-star game between North and South clubs to fund the English pyramid, which is the unique system of interconnected leagues across all levels of British men’s soccer.

On the surface, this proposition seems like a harmless mistake, but the increasingly crowded English football calendar calls for a reduction in the number of matches to protect players’ health. Boehly should also ask the clubs, who would be giving up their multi-million pound assets to risk injury in a meaningless game, if they would be willing to forgo all profits to “fund the pyramid.”

As a new owner, Boehly has a lot to learn, but he is also taking encouraging steps. He invested heavily this summer; the $310.19 million spent by Chelsea was the largest sum of all European clubs. His ambition both on and off the pitch while tabling the idea of the European Super League — at least for now — will hearten Chelsea fans who have grown accustomed to this kind of investment since 2003, when their former owner, Roman Abramovich, acquired the club.

Boehly is a man with ideas who wishes to be a big influence in the Premier League ownership circles. Whether that influence will be a positive one depends on whether he bucks the trend of U.S. insensitivity to the culture he is now a part of.

Jack Lonergan is a sophomore in the College. Why It Was Special appears online and in print every four weeks.