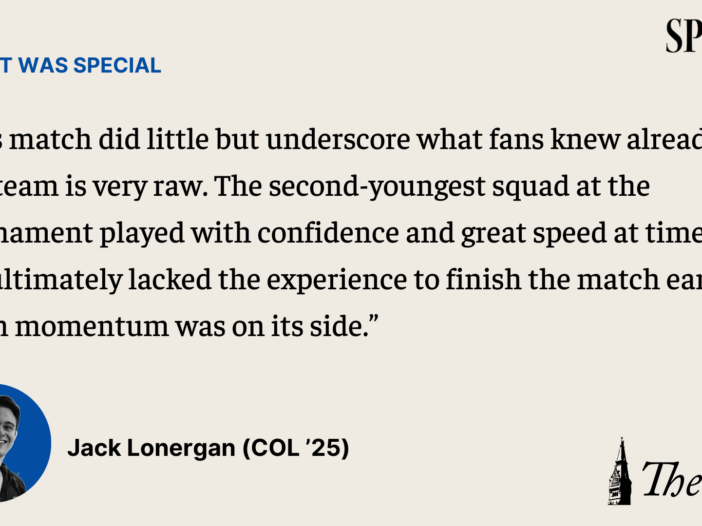 When the U.S. men’s national team’s (USMNT) Group B opponents were drawn, the storylines began to write themselves.

A 2010 rematch with the talented England side was bound to reignite the dormant cross-pond rivalry that has always remained tongue-in-cheek. Incendiary headlines like “Yankee Doddle Dandy” once again dominated English tabloids as the banter between the two fan bases fired off early. The faceoff with Iran proved to be as politically charged as the 1998 edition of the matchup. Wales, the third and final opponent, rounded out a lineup that gave the USMNT reason to be cautiously optimistic about advancing to the round of 16.

Fast forward to the conclusion of the group stage, and luckily, history only partially repeated itself. A 1-1 draw against Wales was a classic game of two halves, with the young stars and stripes shining very brightly before fading away in the second half, allowing Wales back into the game with a tired Walker Zimmerman conceding a penalty in the final 10 minutes.

This match did little but underscore what fans knew already: this team is very raw. The second-youngest squad at the tournament played with confidence and great speed at times, but ultimately lacked the experience to finish the match early when momentum was on its side.

This opening draw led many USMNT fans to collectively hold their breath during halftime of their next matchup against England. Fans somewhat expected mistakes and fatigue to slip in again after a positive first half, and against a much better opponent in the Three Lions, the consequences would be much greater. However, to everyone’s great relief, the Americans did not sit off their opponents and instead maintained their dominance in the second half with an infectious, youthful naivety.

The combative U.S. midfield — appropriately nicknamed MMA — of McKennie, Musah and Adams dominated its English counterparts, whose performances were admittedly subpar. History repeated itself in the even scoreline — the last World Cup matchup between the two nations in 2010 ended in a 1-1 draw. Yet, the sentiment couldn’t be more different. The collective feeling of euphoria in 2010 was replaced by the now-familiar feeling of cautious optimism. The game was there to be won, and the United States arguably had the better chances.

Despite these positive takeaways from a hard-fought draw against the fifth-ranked team in the world, the result left the USMNT with a win-or-go-home situation against a dogged Iranian side. Yet, the tension off the pitch was arguably greater than that on it.

USMNT Head Coach Gregg Berhalter was asked by an Iranian reporter why he had not asked the U.S. Navy to move ships from around Iran. Twenty-three-year-old captain Tyler Adams, who is of mixed ethnicity, was asked if he felt “okay” to be representing “a country with so much discrimination against Black people within its own borders” in the pre-match press conference. A representative of Iran’s soccer federation called for the USMNT to be disqualified for posting the Iranian flag without the country’s official emblem and two lines of Islamic script, an action that U.S. Soccer said was intended to show support for the women of Iran. This controversy, coupled with the troubling news regarding the safety of the Iranian players’ families in retaliation for staying silent during their national anthem during their opening match, meant the fervor off the pitch overshadowed the stakes on it.

Nevertheless, the USMNT’s first-half performance was nerveless, featuring multiple good chances before eventually scoring off of a courageous finish by Christian Pulisic, who injured himself as he bundled the ball into the Iranian net.

In a similar manner to the match against Wales, control slipped away from the U.S. in the final minutes as Iran pushed for an equalizer, which would have been enough to see them through to the next round. There was a collective groan across the nation as the fourth official indicated an additional nine minutes of play, and an even louder collective intake of breath after a late penalty appeal from Iran. Regardless, the USMNT withstood the onslaught to win 1-0, setting up a clash against the Netherlands in the round of 16.

There is no doubt the USMNT is an underdog against the famous Oranje, but the team’s flashes of stellar play in the group stages, and the Netherlands’ unconvincing displays against Senegal and Ecuador in their group games, encourage both the USMNT and fans alike to dare to dream. The USMNT will face the Netherlands on Saturday, Dec. 3 at 10 a.m.

Jack Lonergan is a sophomore in the College. Why it Was Special appears online and in print every three weeks.