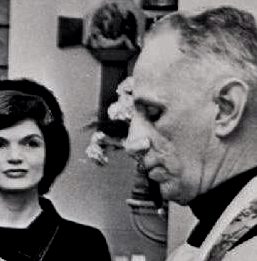 During a long and storied career in Washington, D.C., Fr. Martin J. Casey, S.J., baptized the son of a president, held central roles in the Georgetown Jesuit Community and was buried on Georgetown’s campus.

First, though, Casey was the pastor at Holy Trinity Church on N Street, less than a quarter-mile from Georgetown, where he faced an accusation of sexual abuse of a child that was deemed plausible by the Maryland Province of the Society of Jesus in a report issued December 2018.

A member of Georgetown’s Jesuit community from 1973 until his death in 2006, Casey held many internal and administrative roles over the course of his three decades on campus. He lived in Wolfington Hall, and his funeral was held in Dahlgren Chapel.

But in December, when the Maryland Province published an allegation from his time at Holy Trinity in 1959 and University President John J. DeGioia noted Casey’s allegation in an email, Casey’s former peers in Georgetown’s Jesuit community — some of whom knew him for three decades — were hearing of the case for the first time.

The Maryland Province was first informed of the allegation against Casey in 2002, according to a spokesperson from the province. Georgetown was not notified; Casey lived on campus at the time and worked part-time in the Office of Federal Relations.

Fr. William McFadden, S.J., a former professor in the theology department who knew Casey from their time living in Wolfington Hall, was surprised to hear of the accusation.

“He was a good friend, to me and everyone else in the Community,” McFadden wrote in an email to The Hoya.

“He rooted for everyone in the [Jesuit] House and was our cheerleader, even when in a wheelchair,” Murphy said at the time.

The accusation that Casey sexually abused a minor in 1959 while working at Holy Trinity Catholic Church only became public in 2018. Casey was the pastor of Holy Trinity from 1958 to 1964, a period during which President John F. Kennedy and his family were parishioners. Casey baptized John F. Kennedy Jr. at Georgetown Hospital in 1960, according to university archival material.

Holy Trinity, founded by Jesuits in 1787 and located a block from Georgetown’s front gates, is the oldest operating Roman Catholic community in Washington, D.C.

The sexual abuse allegation against Casey was considered plausible by the Maryland Province, meaning it could not be fully investigated to determine credibility, but there is a reasonable possibility the abuse against a minor occurred at the church.

A full investigation of the accusation was not possible, according to the province, because the historical information about the accusation is incomplete.

Casey did not teach classes during his time at Georgetown, working exclusively for the Jesuit community on campus. Casey was a treasurer and assistant administrator from 1973 to 1992, according to university archives of the Official Catholic Directory and the Catalogues from the Maryland Province.

Casey also worked for Georgetown University as a part-time financial officer in the Office of Federal Relations from 1997 until his retirement in 2006. Casey worked under Fr. T. Byron Collins, S.J., and Scott Fleming (SFS ’72), who served as associate vice president for federal relations from 2001 to 2018.

“At the time, he was quite frail and elderly,” Fleming wrote in an email to The Hoya. “His role was in place when I came to the Office, and he came in only periodically to handle the accounts.”

Before he joined the Jesuit community at Georgetown, Casey was a superior of the Leonard Neale House Jesuit community near Dupont Circle from 1971 to 1973. Casey entered the Society of Jesus in 1931 and was ordained in 1943.

While only one known allegation against Casey was deemed plausible by the province, one-time abusers are rarely found in the church, according to Patrick Wall, an expert on the Catholic Church’s abuse crisis and an advocate for clergy abuse survivors.

“I have never seen, in 25 years, a priest only rape or sodomize one child,” Wall said in a phone interview with The Hoya. “Once you cross that boundary of behavior, there’s never only one. To make that difference in accounting is simply a public relations move.”