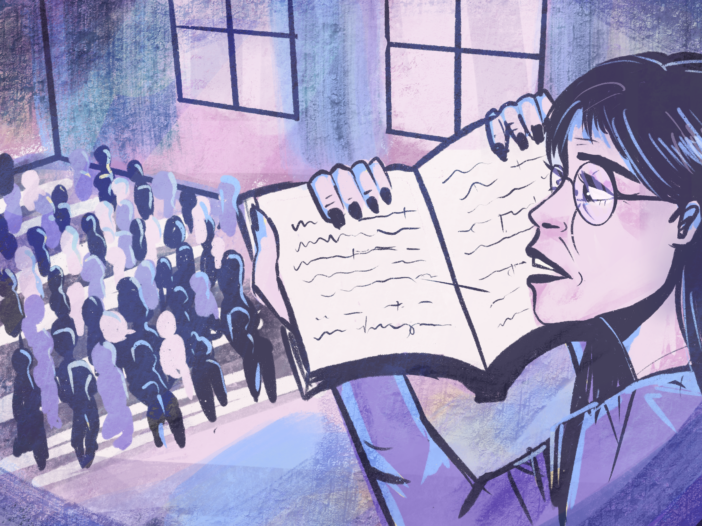 About one week after Georgetown University finance professor Reena Aggarwal gave birth, she was back teaching in the classroom.

It was 1987, and Georgetown, like most workplaces at the time, did not have a parental leave policy. What’s more, Aggarwal’s tenure clock was ticking. Aggarwal began working at Georgetown in 1986, and from that point, she only had seven years to obtain tenure, a policy that is still common across many universities, including at Georgetown.

Georgetown was and continues to be an environment in which female professors face more barriers to career success than their male counterparts. Aggarwal said it was difficult to balance all her duties — as an educator, researcher and parent of two children — while staying on track toward achieving tenure. Some of Aggarwal’s female peers simply didn’t have enough time and support to manage it all.

“I saw a number of women who were on tenure track, but they decided to get out of tenure track because they were trying to juggle a lot of things,” Aggarwal said in a Zoom interview with The Hoya. “We didn’t have flexibility. We didn’t provide that time off or stoppage of the tenure clock.”

Across all Georgetown’s campuses, women comprise about 47% of Georgetown’s full-time faculty. However, in the McDonough School of Business, where Aggarwal teaches, women account for just about 27% of all faculty, and in 2019, only 33% of Georgetown’s tenure-line full professors on the main campus were women.

According to several of Georgetown’s longest-serving female professors who have been at the university since at least the 1990s, inflexible parental leave policies — or the absence of such policies — are just one of the many barriers they have faced throughout their careers.

These professors — some of whom were among the first women in their departments — discussed other obstacles they faced, including an unofficial expectation they contribute more service hours than their male counterparts by serving on committees. These barriers existed in a culture characterized by bias and sexism.

Though there are fewer deterrents to advancement facing Georgetown’s female professors today, these professors said many hurdles are still in place at the university that hinder women’s career development.

Many of Georgetown’s longest-serving female professors noticed an obvious problem while climbing the academic ladder decades ago: At every level of their education, they rarely saw themselves among academics because there were so few female professors.

Deborah Tannen, a Georgetown linguistics professor, began working at the university in 1979. Surviving the long path of advancing in academia was especially hard, she said, because she had few female role models along the way.

“When I got my Ph.D., there was only one woman in the faculty,” Tannen said in a Zoom interview with The Hoya. “When I was an undergrad, I had one woman professor.”

When Tannen started working at Georgetown, there was just one other woman professor in the department, she said.

“That one woman professor took me under her wing. It was a huge benefit that there was this one woman, and we became very good friends,” Tannen said.

Many other female professors have had similar experiences. While pursuing her doctorate, Aggarwal never had any female professors. There were other women in her class when she began, but by the time she graduated, Aggarwal was the only woman left. The others had dropped out along the way, she said.

Having female mentors is critical to improve a female scholars’ chances to succeed in academia, as well as any other field, according to Aggarwal, who said she now draws on her experiences to inform her teaching philosophy.

“Sometimes female students are less likely to speak up. But being a woman faculty member, I can gently bring them in and help them to overcome that barrier, which is very important in the long run,” Aggarwal said.

As of 2019, women make up just over 50% of faculty at U.S. postsecondary institutions, according to the National Center for Education Statistics. But in 1987, the first year this data was collected, that number was only 33.2%.

Georgetown history professor Judith Tucker was searching for a professorship position in the 1980s when academic jobs were scarce. The lack of academic positions put even more pressure on women to succeed in academia when they actually got a job, according to Tucker, who has worked at Georgetown since 1983.

“We felt we had to basically establish our place in the academy,” Tucker said in an interview with The Hoya. “We were pushing open a door — for ourselves and for other women to come.”

After starting at Georgetown, several female professors said they faced barriers to scholarly success their male counterparts never experienced. These women encountered inflexible policies and inadequate support systems, but their concerns were rarely prioritized because there were so few women.

In 2006, the earliest year with available statistics on the gender ratio of Georgetown professors, only 22% of tenure-line full professors at Georgetown’s main campus were women.

Tucker said her department was overwhelmingly composed of white men. She and her female peers often felt they had to work harder to earn the same recognition as their male peers, according to Tucker.

“Did we really belong there? I think we all had to face that challenge that we had to prove ourselves. And that meant we had to be better than our male counterparts, and it was a burden,” Tucker said.

For tenure-line female faculty, this extra work often came in the form of unpaid service hours. Service, which includes a broad range of committee and department responsibilities, leave faculty members with less time to devote to research and teaching, which are critical to securing tenure.

According to Susan Mulroney, professor of pharmacology and physiology, female faculty members were expected to take on significantly more service hours than their male counterparts when she first joined the university in 1985.

Even today women professors continue to face this burden. A 2017 study in the journal Research in Higher Education found women reported 0.6 hours more service per week than men.

Women, especially among the junior faculty, often agree to take on these extra service hours because they find it challenging to decline committee roles, according to Aggarwal.

“Women faculty are more likely to say yes, to do a really good job, and then they get asked again,” Aggarwal said. “Women faculty find it more difficult to say no.”

Another frequent issue women tenure-line professors encountered was the dilemma of raising a family without a paid family leave policy in place, according to Francisca Cho, a professor of East Asian languages and cultures who joined the university in 1992.

“To try to have a child before tenure, you’re just really making a devil’s bargain because you just know that your career is going to suffer,” Cho said in a Zoom interview with The Hoya.

Although the federal Family and Medical Leave Act was passed in 1993 and guaranteed up to 12 weeks of unpaid protected leave after the birth of a child, Georgetown still had no paid parental plan when Cho had her first child in 1999, according to Cho.

Cho spent her sabbatical — available to tenured professors and usually reserved for pursuing research — taking care of her child after giving birth. Angela Stent, professor emerita who joined the university in 1979, timed her sabbatical to coincide with the birth of her first child in 1985.

“I did not have children until I got tenure,” Stent said in an interview with The Hoya. “When I did have my children, there was no maternity leave, and there were also no child care facilities.”

Women who had children before achieving tenure faced even fewer options and were met with insufficient formal parental leave policies, according to Tucker. Tucker, a mother of two, returned to teaching full-time three weeks after giving birth in August 1984, which, looking back, she described as inhumane.

“It was a struggle I would not wish on anybody. We could not complain. We could not push our issues. We could not raise the fact that we as women faculty were feeling beleaguered — because we were expected to do it all,” Tucker said.

Having children while working as a full-time professor was a nearly impossible situation for many women, many of whom were forced to choose between their academic success and family life, according to Tucker.

“When I look at my generation, a number of female faculty did not have children,” Tucker said.

Female professors still face additional barriers at Georgetown, according to these professors, but the environment today is much improved compared with decades ago. The most significant improvement has been the establishment of a paid parental leave policy, several professors told The Hoya.

When professors go on parental leave now, they are also able to pause their tenure clock, so parental leave does not hinder their efforts to secure tenure, according to Aggarwal.

When Georgetown first implemented a paid parental leave policy is not publicly available. A university spokesperson told The Hoya they did not have that information.

Along with the current family leave policies, Georgetown also offers a child care service through Hoya Kids, although there is often a waiting list to join. Many faculty feel the university should make more efforts to provide child care services or other alternatives for all faculty with young children, according to Mulroney.

“Anyone who works here can sign up, but you have to do it very rapidly. You have to get on this list, so there’s no guarantee,” Mulroney said. “It’d be great to have something that was either a subsidy or something that would really help with child care, because it’s an enormous responsibility.”

Georgetown is committed to further improving gender equity among faculty, according to a university spokesperson, who pointed to the creation of a Task Force on Gender Equity in 2018. The task force looked at institutional policies and provided recommendations in a report aimed to enhance and elevate the status of faculty women on campus.

“We received anecdotal evidence of a disproportionate burden on female faculty to perform service and emotional labor at Georgetown, which is similar to the experience of female faculty at other universities,” the report said.

Though the task force dissolved in May 2021 after the publication of its report, it recommended establishing a standing committee to monitor the collection of data on gender equity and advise university policy related to gender equity.

The university has also taken steps to reduce barriers to securing tenure for female professors, according to Aggarwal. Starting about 15 years ago, departments have increasingly sought to protect their junior faculty members from doing too much service so they can focus on teaching and research, Aggarwal said.

“You get tenured associate-level professors getting stuck with all the service because they’re no longer exempt from service because they have gotten their tenure,” Cho said. “Then those who end up taking up the lion’s share of that service work are delayed — and perhaps permanently prevented — from going up for full professor.”

The university is not doing enough to help female professors become full professors, according to Cho. Women still end up contributing more service hours than men, which means women have less time to devote to producing the research and publications that are critical to becoming a full professor.

“They’re taking steps, but there’s still a long way to go,” Cho said. “The persisting problem is the university wants everyone to eventually make it to full professorship but won’t give departments and individuals the resources to get there.”

This article was updated Nov. 19 to clarify the university’s parental leave policies and correctly contextualize a quote attributed to Tannen.