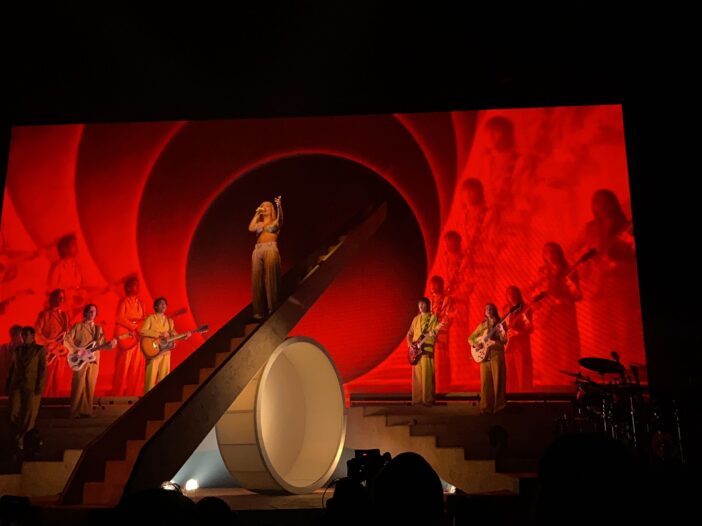 Ladies and gentlemen, begin your sun salutations, wear your SPF 3000 for the ultraviolet rays and throw your cellular device in the water: Lorde is back.

Months after her April show was postponed due to a case of “horrendous laryngitis,” Lorde (Ella Yelich O’Connor) finally graced The Anthem on Aug. 29, 2022. Returning to Washington D.C.  for the first time since 2018’s Melodrama World Tour, Lorde had tremendous expectations to meet.

For the college-aged demographic, Lorde is an iconic cultural figure. After becoming a household name at 15 with her 2013 debut album “Pure Heroine” — namely, from the Grammy Award-winning single “Royals” and radio hit “Team” — Lorde became a teenage pop icon, inspiring current megastars like Olivia Rodrigo, Billie Eilish and Conan Gray.

This growth accelerated with Lorde’s 2017 sophomore album, “Melodrama”, in which Ella kissed goodbye to adolescence. The critically-acclaimed project, accompanied by intoxicating synth-pop beats, was met with dizzying praise. And then, as quickly as Lorde skyrocketed to stardom, she disappeared.

Five years later, in 2021, Lorde returned with her third studio album Solar Power, which was met with tepid reviews; the mostly acoustic sound of the project marked a sharp departure from the darker-sounding pop Lorde had previously pioneered. Organizing an entire tour focused on the album was a bold move — and one that risked isolating fans yearning for childhood nostalgia or those who detested her recent project. But from the second Lorde stepped on stage, all was clear.

Lorde has nothing to prove.

Opening with “Leader of a New Regime,” Lorde welcomed us to her personal playground. The set design was imitative of a life-sized sundial, a reference to the album’s summer aesthetic, complete with a spinning platform. The hollowed-out base of the sundial held Lorde for the opening while her shadow shined through.

Taking just a quick breath to build audience anticipation, Lorde stepped out of the sundial’s crevice and launched right into “Homemade Dynamite,” an electric single from “Melodrama”; she followed up with “Buzzcut Season,” a beloved deepcut from “Pure Heroine”. This opening offered a glimpse into the creativity of the tour — an earnest celebration of Lorde as an artist that has championed personal evolution over the years, warts and all.

The show, split into three acts, closely followed the pattern of the day: sunrise to sundown. As the colored lights of the stage slowly waned from bright colors, so, too, did the theme and content of Lorde’s songs. The audience was watching a play masterminded by its subject.

Through this design, Lorde was able to demonstrate the genius of “Solar Power” to its detractors: the serene album shined in live performance, becoming an intimate moment between the creator and listener. “Before we dance, are you ready to cry?,” Lorde asked before “Stoned at the Nail Salon,” an ethereal rumination about questioning the meaning of work and life.

Lorde continued these tongue-in-cheek conversations throughout the show, breaking the fourth wall of her theatrical performance. “The young people in this room are the smartest people in the world,” she said before “Liability.”

Lorde’s relationship with her fans is sacred and jocular. In a baffling moment, Lorde admitted to swimming in the Potomac River, eliciting shock and laughter from the crowd. Lorde took these moments with grace, talking with fans after the show about the moment. “Now I know why all of you were laughing. I am happy to be a D.C. meme,” she said to fans in a video shared on Twitter.

But yes, amid the chatter, all the expected hits made an appearance: the euphoric, youthful gut punch of “Ribs”; the crowd’s mixture of sweaty, exhausted bodies during “Supercut”; the joyful party anthem “Perfect Places”; and the show-stopping “Green Light.”

Nothing encapsulated the show more than the double-punch ending of “Solar Power” and “A World Alone.” Both sides of Lorde came through during these numbers: the new, bubby and carefree Lorde going to the beach on a summer day, and the old, insecure and angsty Lorde shutting out the noise of the world. Fans will be happy to know that her idiosyncratic and poetic dance moves have survived her personal evolution, and they characterized the entire show.

But Lorde’s shows, to both her and the audience, are not about the specifics. Lorde laid everything bare and naked on the stage, leaving the most intimate parts of her life to be dissected and analyzed. She asked, pondered, visceral questions of what feelings music gives you, what emotions music exercises from the body.

“You chose me to tell your story,” Lorde said during the show, referring to her rise to adolescent stardom. “It could have been any of us in this room. I will never forget that.”

Take all of this from Lorde herself, instead of me: “Washington, are you ready to go somewhere with me?” We certainly were, and we are all better for it.