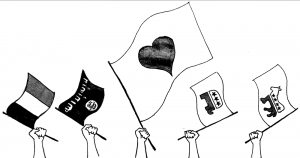 Monday nights for me, since the latter days of August, have meant calls home to my mother, sister and father. I usually ask for a recap of the important things I am missing back in Richmond — only the big ones though, because my mom can really talk — and they ask about school, clubs and social life. We always spend time talking about events happening around the world, in the United States or on Georgetown’s campus. Following the horrific attacks in Beirut and Paris last week, this Monday’s phone call was especially difficult.
Like the rest of the world, my parents and I couldn’t even begin to understand or wrap our heads around the immensely inhumane acts carried out around the world. We spoke of one of my mother’s best friends who was blocks away from one of the restaurant attacks in downtown Paris. We spoke of a student at the French partner school to my high school who lost both of his parents and godparents in the night-turned-nightmare. My mother’s tears flowed while my father’s words couldn’t.
Yet as is human nature, we spoke of the future. We spoke of what can and should be done in response to these attacks. And we spoke of the Islamic State group and how U.S. policy needs change moving forward. And quite frankly, this discussion of changes and of the future sent me further into the depths of sadness.
Unarguably, the response of the French people to the attacks was a testament to the resilience of humans in the face of grave danger and tragedy. Yet even after seeing and reading about this incredibly uplifting and heroic response, I felt deeply discouraged and confused as to the most appropriate and effective steps for the United States to take against the Islamic State group.
Clearly, something must be done. Despite President Obama’s claim that the Islamic State has been “contained,” its terror has extended beyond Iraq and Syria, as evidenced by the previous Charlie Hebdo attacks in Paris, as well as attacks in Cairo, Turkey and Egypt. As the leader of the Western world and as the world’s largest economic and military power, our counterterrorism policy — when effective — has consequences both in combatting terrorism and in building international support — often in the form of multi-country coalitions. Thus, U.S. inaction would give the Islamic State group respite from coalition airstrikes and thus strengthen the group internally and regionally. Yet, on the other end of the spectrum, a full throttle, boots-on-the-ground military policy in a region without reliable leadership or a strong governmental framework would simply create further political and militaristic instability — the conditions which, many argue, fostered the emergence of the Islamic State group originally.
To be clear, the predicament of action versus inaction has existed for some time. Yet in the wake of the Paris attacks and increased international recruiting by the Islamic State group, it is clear that the group’s influence is seeping into Western nations. This raises the stakes dramatically for the United States. Not only does foreign policy with regards to the Islamic State group have direct effects on the safety, security and stability of citizens in the Middle East, it directly impacts the safety of citizens in our own country. That is not to say American or French lives hold more weight than Syrian or Iraqi lives, but from a purely U.S.-centered military perspective, it changes the game.
And on top of all of this, people are scared. Half our nation’s governors say Syrian refugees are not welcome in their states; Georgetown itself had to ramp up security following threats of an attack on D.C.
And thus, I write this piece incredibly unsure as to the correct action the United States should take in response to these attacks. To be candid, it makes my head hurt and my heart fill with grief for all those who have lost and all those who will continue to lose their lives as a result of this brutish, despicable group.
What I do know is this: Resolving of this conflict will not happen quickly. The absurd complexity of the situation simply will not allow for a one-size-fits-all policy to fundamentally weaken radical terrorism in Syria, Iraq, Beirut, Paris or any other part of the world. It is our duty — as a nation built on principles of freedom, liberty and religious tolerance — to accept the harsh reality. In the meantime, we must seek to understand the religious, socioeconomic, societal and other types of root causes and motivations of groups such as the Islamic State group; we must not accept these acts of terrorism, whilst tolerating those of all faiths and cultural upbringings; we must come together as individuals, institutions and organizations and engage in challenging dialogue about how to better secure ourselves while maintaining individual freedoms; and most importantly, we must respect and accept and value and love all people — victims, their families and all others — all over this great Earth.
Ultimately, no matter how weak or strong, liberal or conservative our government’s response is to Al Qaeda, or Hezbollah, or the Islamic State group or to whatever terrorist group emerges next, the only peace that will endure will be rooted in love.

Isaiah Fleming-Klink is a freshman in the School of Foreign Service.