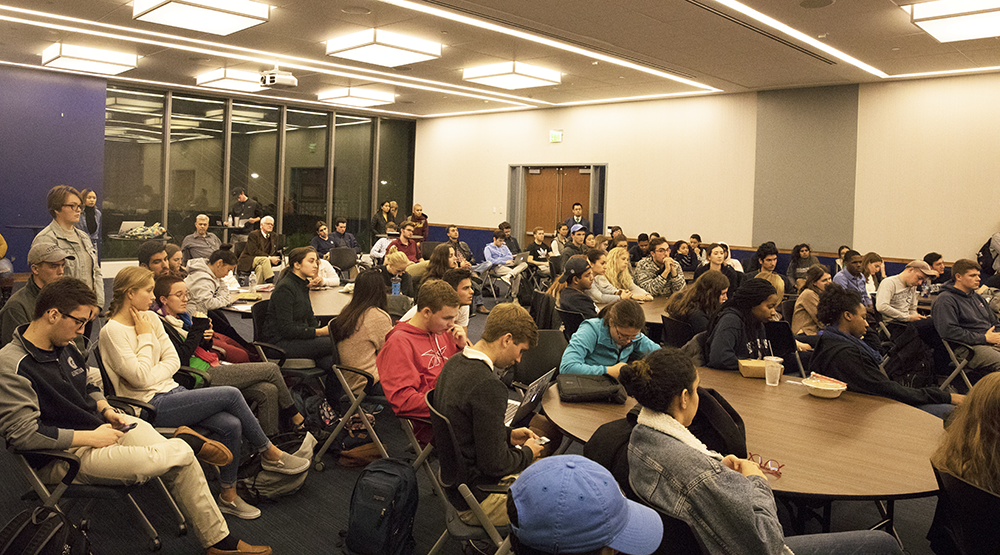 The fate of student group Love Saxa’s funding and status as a university-recognized club remains uncertain after a meeting of the Student Activities Commission ended without a vote early Tuesday morning.

The committee heard the complaint of two students opposed to Love Saxa, who argued that the university should not provide material support to the group. The complainants claim Love Saxa fosters “hatred” and “intolerance” by promoting its view of marriage as existing exclusively between one man and one woman. The students also cited instances in which Love Saxa invited speakers to campus who spoke against LGBTQ equality.

The meeting adjourned at 12:30 a.m. after over three hours of questions and deliberation because the Healey Family Student Center, the location of the meeting, closes at 1 a.m.

About 100 students attended the hearing, which was only open to Georgetown students and members of staff or faculty. Attendees quickly filled the meeting room to capacity, leaving about 50 students who were turned away to crowd outside and watch through the open doors until the hearing was moved to a larger room.

The relevant clause states that no student groups are “eligible for access to benefits if their purpose or activities … foster hatred or intolerance of others because of their race, nationality, gender, religion or sexual preference.”

Following standard practice, Derr referred the complaint to the Student Activities Commission, a committee of undergraduate students that operates under the authority of university administrators to allocate funding to student organizations that comply with its standards. SAC allocates about $350,000 to more than 110 student organizations annually, according to its website.

Love Saxa receives $250 annually in university funding. As an unrecognized student group, it would not have access to university resources, such as the use of classrooms for events.

Love Saxa’s constitution states the organization’s mission is “cultivating a proper understanding of sex, gender, marriage, and family” on campus. It also states that the club’s programming — including discussions, lectures and public campaigns — are intended to increase awareness of the benefits of the “primacy of marriage,” “understood as a monogamous and permanent union between a man and a woman.”

The students seeking to defund Love Saxa argued that the club’s purpose is “homophobic” and “dehumanizing” to LGBTQ students.

Love Saxa President Amelia Irvine (COL ’19) and Vice President Hunter Estes (SFS ’19) countered that the views espoused by Love Saxa are rooted in Catholic and Jesuit tradition and are deeply held religious beliefs for many of the group’s members. They also argued the club’s stance is a political opinion rather than a matter of intolerance.

Irvine and Estes said Love Saxa’s activities include advocacy on a number of other issues and have recently been focused on opposing pornography and the prevalence of a “hookup culture” on college campuses.

The complainants said their action followed the publication of a viewpoint in The Hoya written by Irvine, who wrote that the group’s definition of marriage “does not include same-sex couples, as [Love Saxa members] believe that marriage is a conjugal union on every level — emotional, spiritual, physical and mental — directed toward caring for biological children.”

Love Saxa has had a contentious relationship with LGBTQ student groups on campus since protests in 2013 led by then-GU Pride President Thomas Lloyd (SFS ’15). Love Saxa took a yearlong hiatus beginning in spring 2016 after members did not submit a budget to SAC.

Irvine said she stands by the decision of past Love Saxa leadership in the fall of 2013 to invite to campus Ryan Anderson, a fellow of The Heritage Foundation and an author known for opposing LGBTQ rights. Estes said that the push to strip Love Saxa of its university funding constitutes censorship of free speech.

Students opposing Love Saxa pointed to the unrecognized pro-abortion rights student group H*yas for Choice, which regularly hosts events and expresses its views on campus even though it has been denied official recognition by the university.

The committee did not decide as of press time on a date to reconvene for a final vote.