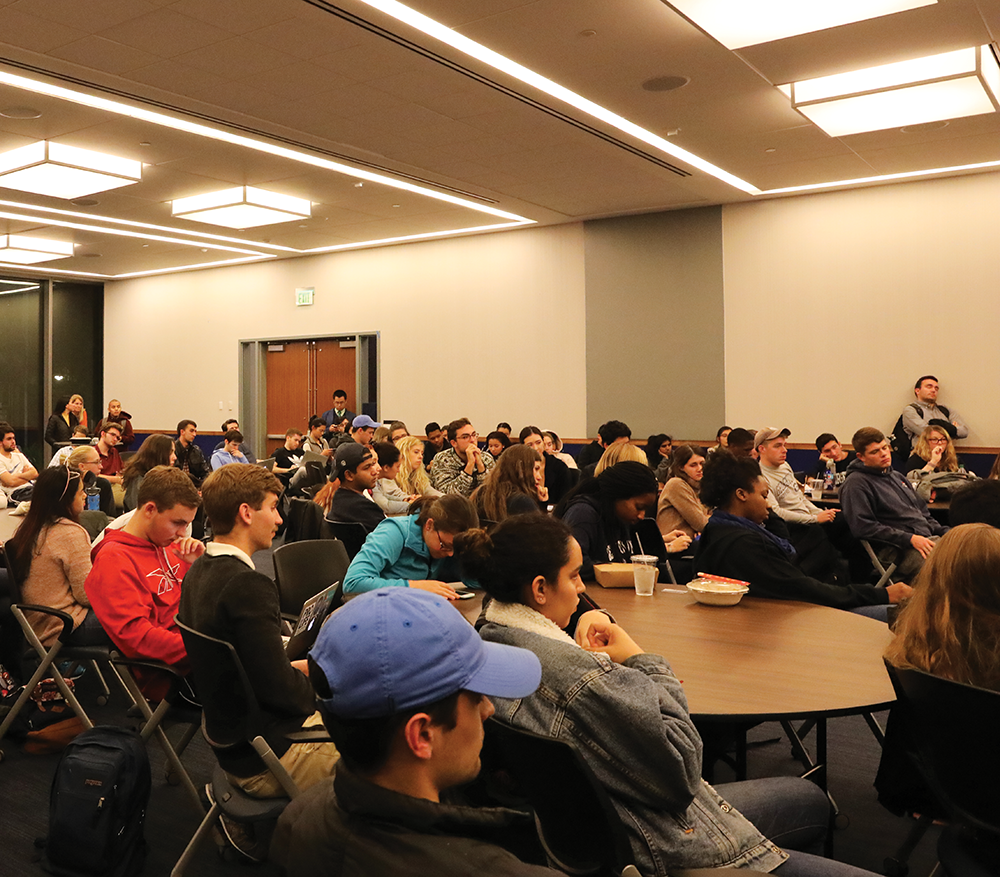 Student group Love Saxa is keeping its university funding and recognized status after the Student Activities Commission voted early this morning to recommend no action against the group.

The commission voted 8-4 to reject a complaint filed by student LGBTQ activists Chad Gasman (COL ’20) and Jasmin Ouseph (SFS ’19) on Oct. 22, which alleged Love Saxa fostered “hatred” and “intolerance” by publicly promoting a view of marriage as existing only between one man and one woman.

The vote is not binding — it constitutes a recommendation to Amanda Carlton, the university’s director of student engagement, who is free to accept, amend or reject it.  Her decision can in turn be appealed to Vice President of Student Affairs Todd Olson.

A majority of the 12 voting student members of the commission agreed that the group did not violate any Georgetown University standards by advocating for their traditional view of marriage, which aligns with the position of the Catholic Church. Commissioners deliberated in a private executive session for nearly two hours Thursday night and into early Friday morning, following a hearing Monday that ended after three hours with no vote.

Gasman and Ouseph also cited instances in which Love Saxa invited speakers to campus who spoke against LGBTQ equality, and argued that the club’s purpose is “homophobic” and “dehumanizing” to LGBTQ students. Their petition to SAC asked the university to remove Love Saxa’s university funding and officially recognized status.

Love Saxa receives $250 annually in university funding, and as a recognized student group, it also has access to university resources, such as the use of classrooms for events.

“I’m both unsurprised but also a little surprised, because the basis of our complaint was pretty firmly rooted in the organization’s standards,” Ouseph said.

Their argument focused on a clause Division of Student Affairs’ Student Organization Standards that states that no student groups are “eligible for access to benefits if their purpose or activities … foster hatred or intolerance of others because of their race, nationality, gender, religion or sexual preference.”

Love Saxa President Amelia Irvine (COL ’19) said she is glad SAC voted to take no action against the group, but added she regrets the university became involved in the dispute.

“This was not our chosen path of reconciliation. We would rather have worked this out between students rather than have this dramatic political event where there had to be a winner and a loser,” Irvine said. “I hope we can come together in a productive dialogue where we can recognize each other’s humanity.”

The university administration did not explicitly take sides in the dispute before the vote, but Senior Director for Strategic Communications Rachel Pugh said “Love Saxa is one of many groups operating on campus with positions that affirm the teachings of the Catholic Church.”

“Through [SAC], the University supports more than 100 co-curricular student organizations with access to benefits, including Love Saxa,” Pugh wrote in an email to The Hoya. “We strongly support a climate that continues to provide students with new and deeper contexts for engaging with our Catholic tradition and identity.”

“We also support a climate that is welcoming to all students and supporting of our LGBTQ communities,” Pugh wrote.

The dispute started Sept. 25 when the students raised concerns against Love Saxa to Assistant Dean for Student Engagement Erika Cohen-Derr. Following standard practice, Cohen-Derr referred the complaint to SAC, a committee of undergraduate students that operates under the authority of university administrators to allocate funding to student organizations that comply with its standards. SAC allocates about $350,000 to more than 110 student organizations annually, according to its website.

Love Saxa’s constitution states the organization’s mission is “cultivating a proper understanding of sex, gender, marriage, and family” on campus. It also states that the club’s programming — including discussions, lectures and public campaigns — are intended to increase awareness of the benefits of the “primacy of marriage,” “understood as a monogamous and permanent union between a man and a woman.”

The complainants said their action followed the publication of a viewpoint in The Hoya written by Irvine, who wrote that the group’s definition of marriage “does not include same-sex couples, as [Love Saxa members] believe that marriage is a conjugal union on every level — emotional, spiritual, physical and mental — directed toward caring for biological children.”

Love Saxa has had a contentious relationship with LGBTQ student groups on campus since protests in 2013 led by then-GU Pride President Thomas Lloyd (SFS ’15). Love Saxa took a yearlong hiatus beginning in spring 2016 after members did not submit a budget to SAC.

At the Monday hearing, Irvine and Love Saxa Vice President Hunter Estes (SFS ’19) countered the complaint, saying the views espoused by Love Saxa are rooted in Catholic and Jesuit tradition and are deeply held religious beliefs for many of the group’s members. They also argued the club’s stance is a political opinion rather than a matter of intolerance.

Irvine and Estes said Love Saxa’s activities include advocacy on a number of other issues and have recently been focused on opposing pornography and the prevalence of a “hookup culture” on college campuses.

Irvine stood by the decision of past Love Saxa leadership in the fall of 2013 to invite to campus Ryan Anderson, a fellow of The Heritage Foundation and an author known for opposing LGBTQ rights. Estes said that the push to strip Love Saxa of its university funding constituted censorship of free speech.

Students opposing Love Saxa pointed to the unrecognized pro-abortion rights student group H*yas for Choice, which regularly hosts events and expresses its views on campus even though it has been denied official recognition by the university.