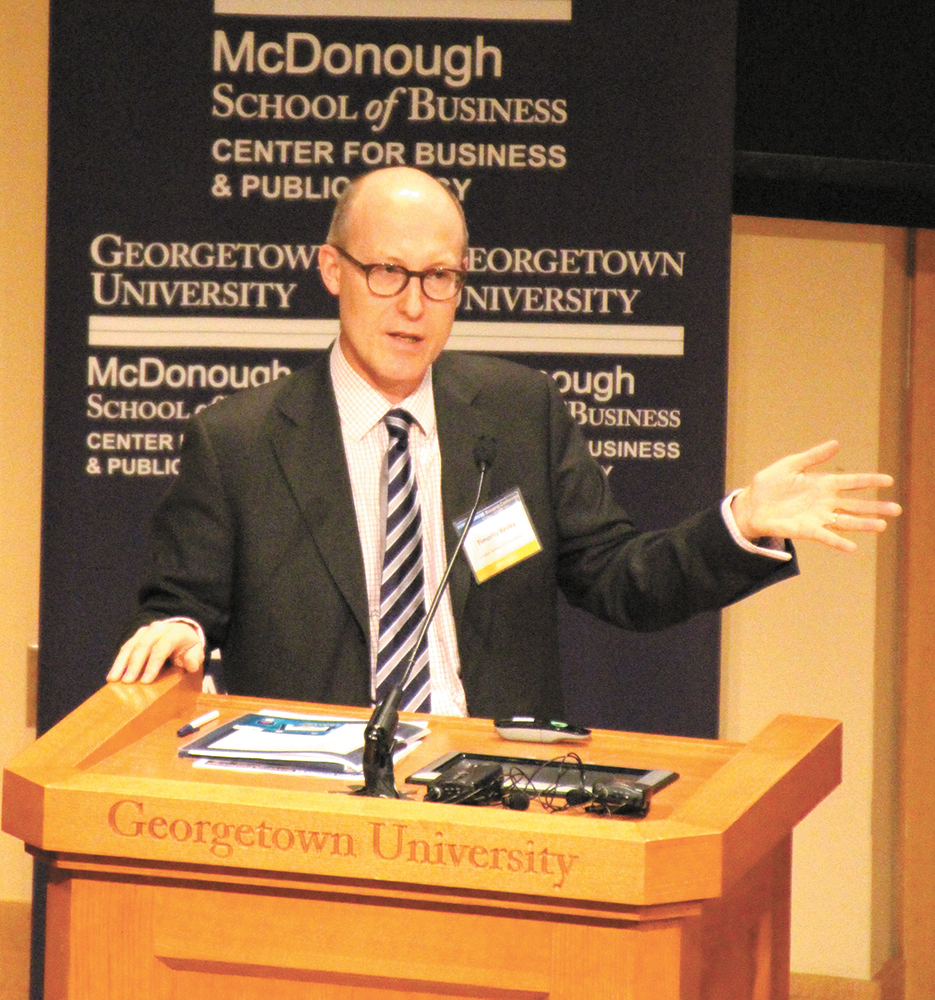 World Bank executives, business and economics professors from all over the country and international investors celebrated the World Bank Group’s annual flagship report, which highlights regulatory barriers to entrepreneurship in 189 worldwide economies, at the 10th anniversary of the Doing Business Research conference held yesterday and today in Lohrfink Auditorium.
Pairing with the United States Agency for International Development and influential economists and political scientists, the Doing Business conference aims to educate people about the international business climate and barriers to economic innovation.
The conference discussed issues such as market entry, financial infrastructure, labor markets and corrupt regulation in developing economies. Keynote speaker Tim Belsey, professor of economics and political science at the London School of Economics, noted the necessity of internationally comparable measures for business climates.
“To fundamentally change the business climate, one requires effective policy,” Belsey said.
The Doing Business report has created a set of indicators that allows for comparable measurement of the business climate across economies. These indicators include topics such as the ability to start a business, the ability to obtain a line of credit, investor protection, trading across borders and many others that create a detailed picture about the climate and policy in a specific economy. Stephen O’Connell, chief economist of the USAID, offered a reaction following the keynote address, stating that there are two major areas that still need to be resolved.
“First, the question of whether institutional changes in these measures are sustained over time and what are the determinants of that,” he said. “The question is whether regulations go away as soon as they accomplish their objectives. We are conducting retrospective research about the staying power of these interventions at USAID.”
O’Connell added that the organization is looking at the difference between de jure regulatory regimes, or the rules on the books, and the de facto regime, how things actually work.
“The thrust in economics of long-run growth and development over the last 20 years has been to push attention towards the de facto regime as the thing that really matters,” he said. “Work on the relation between the de jure measures and measures of de facto performance is critical to understand and the process of convergence from de facto performance to de jure rules.”
The conference served as a learning opportunity for participants with breakout sessions following the keynote address that focused on how the business climate of economies can be changed with effective policy reform.
Nighat Jadoon, an officer in the poverty reduction and the financial and private sector development groups at the World Bank, has a MBA in finance and analyzes the budgets of developmental economies. She is a newcomer to the Doing Business conference.
“This was an opportunity to come and understand what the Doing Business report does. I came here from the learning point of view to be exposed to this side of the business,” Jadoon said.
The Doing Business report has played an important role in contributing to the fight to end poverty in developing nations and provides useful benchmarking indicators as policy tools for reform.