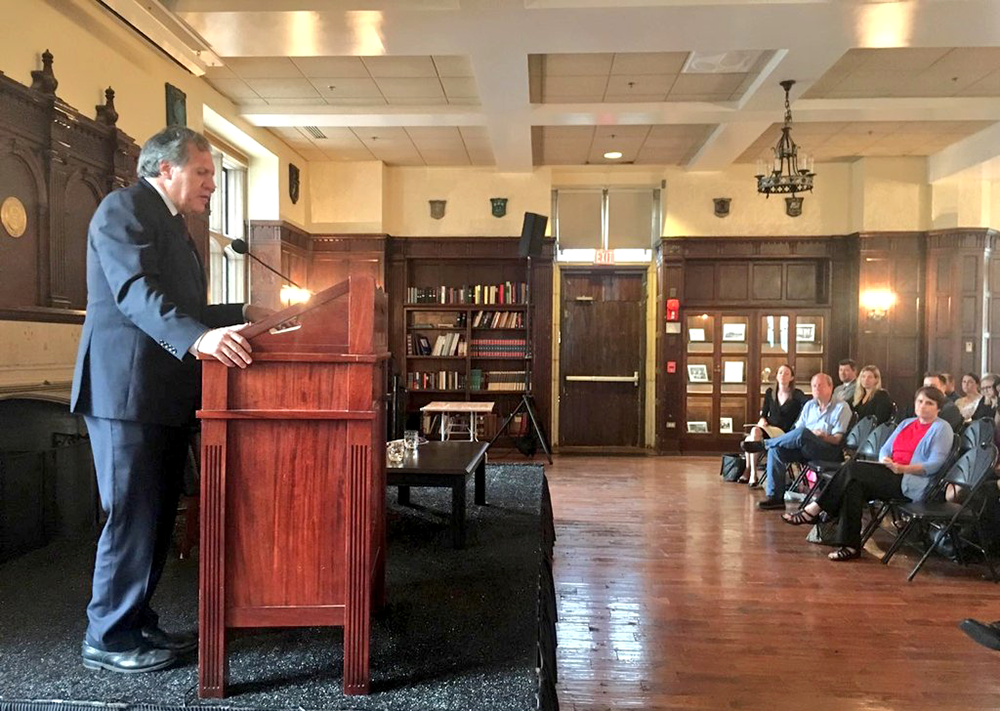 Secretary General of the Organization of American States Luis Almagro stressed the need to address the Latin American human rights crisis in countries such as Cuba and Venezuela – which Freedom House currently rates as only partly free and not free, respectively – as he was awarded the 2016 Mark Palmer Prize for human rights diplomacy by Freedom House and Georgetown University Institute for the Study of Diplomacy in Copley Formal Lounge yesterday.

The Organization of American States was founded in 1948 to promote regional solidarity and cooperation among countries in North and South America. The OAS has no access to military force.

Almagro said the upholding of international human rights conventions in the region was his primary concern during his tenure as Secretary-General of the OAS.

“A government cannot judge itself, it must be judged by its people. This is the vital role that citizens on our continent must play,” Almagro said. “Accountability comes from the outside and the right of the people to elect their leaders must not be infringed. With this system in place, the people are less likely to seek violent and destructive ways to force change.”

The Americas are facing systemic inequality that must be addressed as soon as possible, according to Almagro.

“Even today, our hemisphere remains one of the most unequal regions,” Almagro said. “The unequal distribution of income, access to basic goods and services is a constant factor that directly affects the full enjoyment of our citizens’ political, economic, social and cultural rights.”

Almagro said the Cubans – who are not currently a member of the OAS – are welcome as long as they make a commitment to satisfy certain human rights standards.

“The decision to lift the suspension of Cuba from the OAS in 2009 gave the Cubans the invitation to re-enter the organization. So far they have not done that,” Almagro said. “The thing is that it will not be a short process. It will take a while for the Cubans to adapt to these international human rights standards.”

Venezuela has faced significant economic challenges as the price of oil has declined. According to Almagro, a referendum on whether Venezuelan President Nicolás Maduro should remain in power would do the greatest good toward attaining stability in the country.

“We have to be strong and firm and keep the pressure and ensure the referendum takes place this year,” Almagro said. “That is the most important step in Venezuelan democracy.”

Almagro said he supports the peace deal signed between Colombia and the Revolutionary Armed Forces of Colombia – a terrorist group that has been plaguing the country with violence for decades – despite FARC’s alleged links to international drug trafficking.

“This deal has given Colombians a chance to live in peace and they should take it,” Almagro said.

Arjun Mehrotra (SFS ’20), who attended the event, said it was both enjoyable and enlightening.

“This was very informative for me because I personally did not know too much about the OAS, and having an opportunity to hear from the Secretary General and recently announced winner of the Mark Palmer Prize, Mr. Luis Almagro, was honestly a privilege,” Mehrotra said.