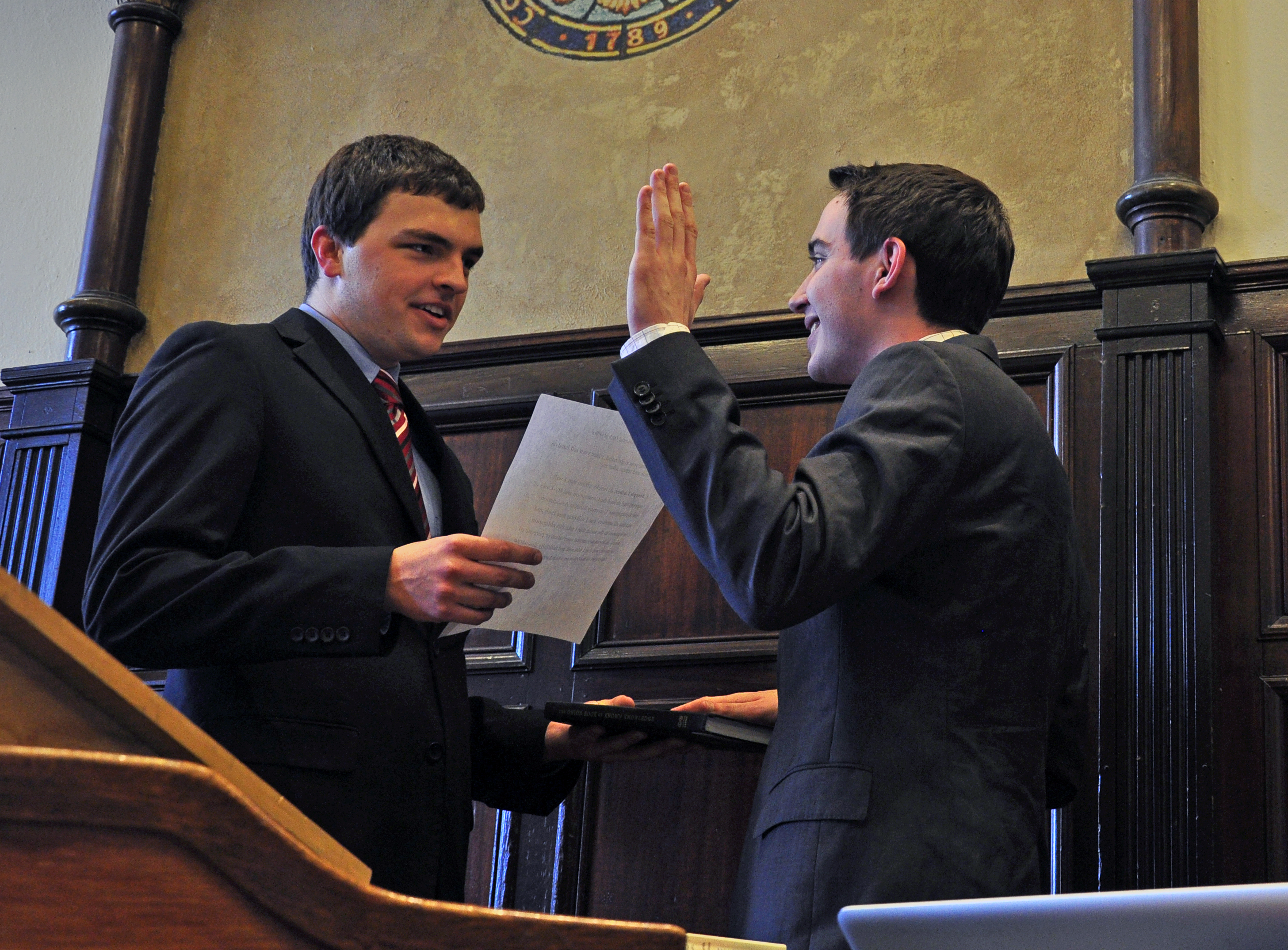 Chief Justice of the Constitutional Council Joshua Shinbrot (COL ’16) presided over the inauguration, which began with a speech from Jikaria, who congratulated Luther and Rohan on winning the election.

“I would not want anyone else protecting Georgetown except Joe and Connor for the upcoming year,” Jikaria said.

Jikaria also said that she was proud of the work she and Tezel accomplished over the past year and offered a word of advice to those working in GUSA in the future.

“I encourage you to be mindful of the work that you do. Remember to keep things in perspective, and don’t be afraid to step outside your comfort zone,” Jikaria said.

After Jikaria spoke, Tezel gave a farewell speech of his own.

He began by thanking his cabinet and staff, especially Chief of Staff Katherine Key (SFS ’15), and reflecting fondly on his administration.

“Our platform was an incubator and a sounding board based on conversations with hundreds of people we met,” Tezel said. “We wanted GUSA to be a think tank where ideas could come together, where student advocates could come together toward a common end.”
Tezel then said that the new executives should work on bridging the gap between students and the university administration.

“An unbridgeable divide exists between the university’s decisions and the needs of its students,” Tezel said. “How do we reconcile the elite institution we claim to be with the dilapidated state of our facilities?”

After Tezel left the podium, Luther and Rohan were sworn in by Tezel and Jikaria, respectively.

He remarked on his unexpected transition from editor of the satirical magazine, The Georgetown Heckler, to GUSA chief executive and said that his administration will make GUSA accessible for more students.

“We have a unique opportunity this year to change this culture,” Luther said. “It is our distinct desire to create a GUSA which truly represents Hoyas from all walks of life. To pull the most passionate people on campus and help them achieve their goals.”
Luther concluded his address by stressing the importance of the upcoming 2018 Campus Plan and called on students to ensure their voices are heard by administrators.
“Student leaders have put countless hours into this plan and we need to be sure to engage the student body in every step of the way,” Luther said. “If we engage the student body in the way Connor and I envision, then ‘Youtopia’ won’t just be a campaign promise.”

Rohan gave the last address, in which he thanked Tezel and Jikaria for their help in the transition period and spoke candidly about his transfer to Georgetown from George Mason University in fall of 2013.

“I was full of doubt about my ability to succeed in such a demanding environment,” Rohan said. “Coming from a university with a far less active student body and a significantly more lax atmosphere, the thought of enrolling at Georgetown was intimidating.”

Now, as vice president, Rohan said that he looks forward to creating a more open and diverse GUSA through a highly passionate team of driven students.

Luther and Rohan set a record for applications to the executive cabinet and staff with 123 students applying for positions. The majority of students who applied have never been a part of GUSA.

Deliberations for the incoming positions have begun, and final decisions will be made by the end of this week. Currently, confirmed deputy chiefs of staff include Arman Ramnath (SFS ’16), Chris Fisk (COL ’17), current Advisory Neighborhood Commission Student Commissioner Reed Howard (SFS ’17), Khadijah Khan (COL ‘17), Ken Nunnenkamp (MSB ’16), Randy Puno (COL ’16) and Village A GUSA senator Annie Aleman (SFS ’16). These deputies come from four out of the five 2015 GUSA executive race campaigns, with the exception of a member of the Tim Rosenberger (COL ’16) and Reno Varghese (SFS ’16) campaign.

Incoming Chief of Staff and GUSA senate Vice-Speaker Abbey McNaughton (COL ’16), whose executive campaign came in second to Luther and Rohan’s, said that the two will bring a cultural change to GUSA.

According to McNaughton, Luther and Rohan have created many new cabinet positions for their administration.
Secretary positions have been added in areas such as sexual assault policy, mental health, recognized and unrecognized student groups, free speech and D.C. affairs.

One such member of their administration is Director of Communications Will Simons (COL ’16), who originally ran alongside McNaughton as the vice presidential candidate.

Simons said that he has been tasked with mending the gap between the student body and GUSA, ensuring that GUSA “communicates and engages effectively.” He will work alongside incoming Press Secretary Jenna Galper (COL ’17).

“[Luther and Rohan] have placed a huge emphasis on maintaining accessibility and transparency, which are crucial to effective communication,” Simons wrote in an email to The Hoya. “I look forward to incorporating those ideas into everything we do.”

Simons’ first job in the administration is to inform and mobilize as many students as possible in support of the Campus Plan petition.

One of the students working alongside Simons in the Communications Department is “Minister of Fun” Craig Levites (COL ’17).
Levites, a Heckler editorial board member, is the only member of the paper in the administration’s immediate staff. He said that his role is to present important issues to students in a fun and engaging way.

“Joe and Connor really want GUSA to be the campus megaphone,” Levites said. “If we can produce content that students are more responsive to, we’re enhancing GUSA’s repute as an advocacy organization above anything else.”

Levites said that he is hopeful for the future of GUSA’s image on-campus.

“Their most useful role is as a buffer between the administration and the students, making sure that everyone’s interest is taken into account and adequately represented during the university’s policymaking process,” Levites said. “Over the next year, I think people will finally come around to seeing GUSA as the ally that it is, not the the alienated outsider group it’s been labelled as in the past.”