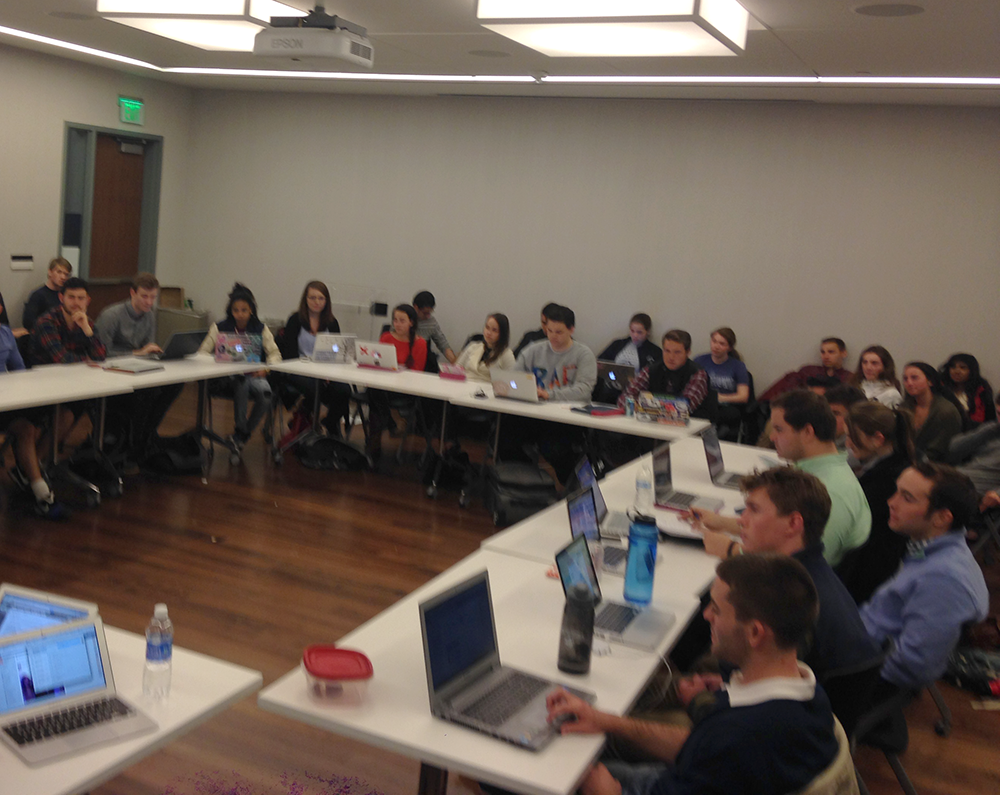 Led by Chief of Staff Abbey McNaughton (COL ’16), the cabinet consists of 67 students. Of the cabinet, 46 percent has no prior experience in GUSA.

Luther and Rohan chose to accept applications to their cabinet, which McNaughton said was an effort to make GUSA more representative of all students. They received a total of 123 applications.

“It was really to make sure that GUSA was representing all parts of campus and not just the same group of politically interested government people,” McNaughton said.

Luther said that while drawing in new students to GUSA was important, he was more concerned with attracting the most committed and knowledgeable people possible.

“We didn’t go into it saying we want the breakdown to be X, Y and Z,” Luther said. “We went into it looking at each position saying, ‘who is the most qualified for this,’ in terms of who is the most passionate, who is the most engaged and who is going to make the biggest tangible difference.”

McNaughton echoed this sentiment, and said that the administration sought to select the most passionate candidates.

“[We wanted] people who are genuinely passionate about these kinds of things, and have really targeted, realistic goals for the next year rather than people who just want to be involved in GUSA,” McNaughton said.

Luther said that after he and Rohan were elected without a clearly defined platform or budget, he saw it as a chance to work with a “clean slate.”

“This year, it’s a bottom-up approach,” Luther said. “It’s the secretaries who are driving the policy. We’re not going to micromanage them and tell them exactly what they need to work on.”

Other positions were created out of previously existing ones. For instance, campus planning, residential living and auxiliary services are now three separate entities with their own secretaries, as opposed to previous years in which they were combined into one.

Luther said that these new positions will enable GUSA to better represent all interests on campus.

“We thought we’d get a lot more results out of this,” Luther said. “Certain positions covered a lot of very important topics, and while there were great people doing those jobs, it was perhaps hindering their ability to work on some of those other issues.”

McNaughton said she expects that GUSA will still be unified despite the new compartmentalized positions.

“Giving them their own positions isn’t [meant] to break apart the intersectionality of those areas, but to give even more attention to them. We see those secretaries continue to collaborate,” McNaughton said.

The undersecretary of mental health will serve to address the mental health of students, which was one of the only issues that Luther and Rohan did not satirize in their campaign. The position will be filled by

Ben Johnson (NHS ’17), who said that broadening the conversation about mental health on campus will be a major focus of the cabinet next year.

Johnson, who is also a member of Georgetown Emergency Response Medical Service, has no past experience in GUSA. Motivated to join by an interest in the topic of mental health, he said that GUSA members will serve as both facilitators and initiators.

“As a facilitator, my role is primarily to serve as a bridge between the many like-minded but separate student and university groups and resources. As an initiator, I aim to seek out under-addressed mental health issues in the Georgetown community through the lens of the GUSA Mental Health Committee, and work to create partnerships to see those issues brought to light.”

The new position for secretary of free speech, which will be filled by current member of the Speech and Expression Committee Sam Kleinman (COL ’16), will help direct policy initiatives to change or augment university policies regarding speech and assembly. He will work closely with H*yas for Choice Vice President and Hoyas United for Free Speech member Vincent DeLaurentis (SFS ’17) to oversee the new Office of the Free Speech Advocate that he campaigned to create.

Kleinman, who served as a GUSA senator representing LXR this year, said that the office will ensure that the rights of Georgetown students are protected.

“It will advise folks who are bringing complaints against university officials,” Kleinman wrote in an email to The Hoya. “It responds in real time to potential policy violations to ensure that the university doesn’t interrupt a legal protest.”

Another student responsible for crafting Luther and Rohan’s new image of GUSA is Minister of Fun Craig Levites (COL ’17).

Levites, who also became editor-in-chief of The Georgetown Heckler after Luther was elected into office, is responsible for presenting GUSA’s important issues in a fun and engaging way to the student body.

“Joe and Connor really want GUSA to be the campus megaphone,” Levites said. “Over the next year, I think people will finally come around to seeing GUSA as the ally that it is, not the alienated outsider group it’s been labeled as in the past.”

Melina Delkic (COL ’17) is the student group of the week coordinator and like many students in the Luther-Rohan cabinet, a first-time GUSA member. Delkic is responsible for profiling student groups on GUSA social media pages and highlighting the work that groups are doing to bring something new to campus. In the past, GUSA has only highlighted student individuals on its website.

“Joe and Connor created this position because there are so many fantastic student groups on campus that people don’t know about,” Delkic said. “Those groups deserve to reach as many people as possible. … Clubs are really the heart of Georgetown.”

Delkic’s online presence overlaps with Stephen Cacace (MSB ’16), director of social media. Cacace, who is also a GUSA newcomer, said he was motivated to get involved after seeing students’ reactions to the unconventional Luther-Rohan campaign.

“People were excited about GUSA for the first time in my three years here,” Cacace said. “I went to the GUSA Facebook page and Twitter account and was underwhelmed.  I felt that the new administration needed someone to help them get their voice heard.”

“Craig is going to keep things loose and make sure we stay true to our message,” Luther said. “Make sure I don’t become some beltway insider overnight.”