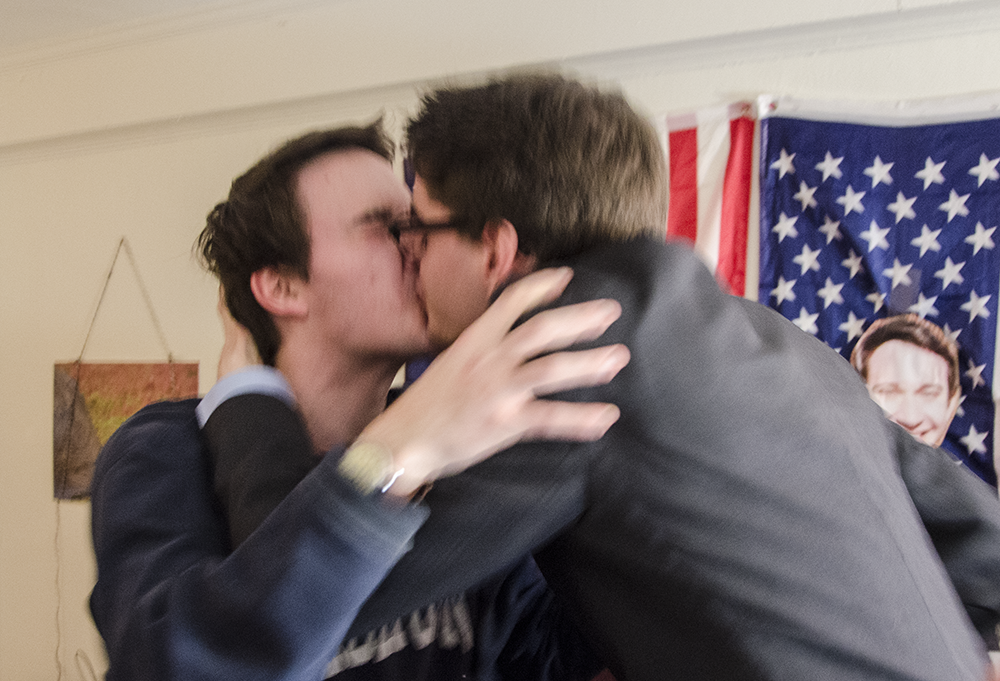 “I’m very surprised with how the election turned out. I always considered the possibility that this campaign, which started as pure satire, could win, but I have to say I was very blown away by the results,” Luther said

“I have many thanks to give the Georgetown community for all the faith they put in me and I will do everything I can to advocate for their interests in the coming year.”

The pair received 29.7 percent of the votes in the first round of the instant runoff and 54.1 percent in the fourth and final round, leaving them with 1,693 votes. Abbey McNaughton (COL ’16) and Will Simons (COL ’16), placed second with 1,434 votes in the final round.

The results, which were tweeted round-by-round over the course of 21 minutes by the GUSA Election Commission, partially match the results of The Hoya’s door-to-door poll, which predicted Luther-Rohan as the winners with the support of 23 percent of likely voters.

The ticket, which received endorsements from the editorial boards of The Hoya, the Georgetown Voice and the Georgetown Improv Association, ran on a satirical platform of “Youtopia,” promising to obliterate any student issues or concerns. Although almost entirely satirical, the platform is serious about its health and safety tenets, which push for the expansion of and increased accessibility to the Counseling and Psychiatric Services, improved disability access and increased attention to sexual assault and Title IX regulations.

Luther expressed commitment to creating a comprehensive list of serious goals, but plans to engage the student body through humor.

“It was pure satire before, but you have my explicit word that we will, in the coming days, begin a real administration,” Luther said.

Rohan said that he did not expect to win and congratulated the other four tickets for well-thought-out platforms.

“All the campaigns have been wonderful,” Rohan said. “Ultimately they had a lot of experience. I guess I’m just surprised by the weight of our message in that we want to bring transparency and we want to bring the student voice back. We want to advocate on behalf of the student body — that’s what we’ve been running on.”

McNaughton and Simons received the most endorsements of any ticket, with support from H*yas for Choice and Hoyas for Immigrant Rights, among others.

Simons said that he hopes he and McNaughton can work with the Luther-Rohan team in the upcoming months.

“They clearly showed that GUSA fails to engage students in the correct way and in the right manner,” Simons said. “We’re going to work with them and we look forward to working with them in the next year.”

The campaign faced negative press and attention in the past two weeks; Wadibia was accused of ignorance of sexual assault and homophobia, and criticism intensified after his performance at the presidential debate seemed to target other candidates.

“I would say this campaign has been a blessing to my life,” Wadibia said. “I’m not a perfect individual. I never will be perfect. … You know, it’s no secret that my campaign underwent a lot of negative quotes and things, and we stayed true to our dignity. Does that mean that we were perfect? No. But we strove to be perfect by being our best at all times.”

Wadibia said he will consider working in the Luther-Rohan administration, suggesting a possible post as the undersecretary for mission and ministry.

Sara Margolis (COL ’16) and Ryan Shymansky (COL ’16) came in fourth place with 717 votes in the second round. The ticket, conversely, came in second place in The Hoya’s poll, trailing behind Luther-Rohan by only six votes.

Margolis encouraged her campaign staff to get involved in the Luther-Rohan cabinet.

Tim Rosenberger (COL ’16) and Reno Varghese (SFS ’16) came in last place with 154 votes in first-round voting. Rosenberger said that he does not have plans to continue work in GUSA but will provide help if Luther and Rohan request it.

“Good luck to Joe and Connor,” Rosenberger said. “I think we were ready for something different and the race showed us that.”

“Trevor, I have bad news for you,” Luther said on the phone to Tezel. “I’m replacing you.”
Tezel said that he is hopeful that Luther and Rohan can bring a new approach and perspective to GUSA.

“I think it says a lot about Georgetown students,” Tezel said. “We are constantly engaged in what’s going on on campus and what Joe and Connor were able to bring to the race was a genuine desire to shake up how GUSA works. Any organization, including GUSA, needs that every once in a while.”