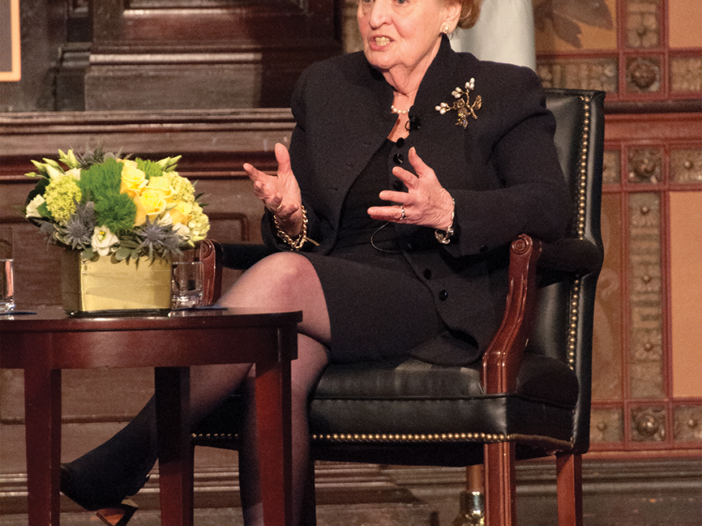 A few days before the start of the spring 2022 semester, Madeleine Albright, the first female U.S. secretary of state and a longtime Georgetown University professor, called Joel Hellman, the dean of the Walsh School of Foreign Service (SFS). She told him that due to her illness, she would not be able to teach her beloved course that semester.

She waited until right before the semester began because the last thing she wanted to give up was her presence in the classroom with her students, her colleagues said. She wanted to teach her students, and she held onto that hope until she didn’t have a choice.

On March 23, Albright died in Washington, D.C., at the age of 84. The cause was cancer, according to her family.

“She was surrounded by family and friends,” a statement from her family said. “We have lost a loving mother, grandmother, sister, aunt, and friend.”

Albright was a core figure in the Clinton administration, first serving as U.S. ambassador to the United Nations from 1993 to 1997. In 1997, she became the first female U.S. secretary of state, a post that she held until 2001.

Albright began teaching at the SFS in 1982. She taught at Georgetown every year since then, with the exception of the years she served as U.N. ambassador and secretary of state.

Her leadership was characterized by a blend of pragmatism and idealism, accompanied by her generous spirit and legendary, disarming humor, according to colleagues.

She also advanced the role of women in foreign policy, according to longtime friend and colleague Melanne Verveer (SLL ’66, GRAD ’69). Verveer, who now serves as executive director of the Georgetown Institute for Women, Peace and Security, worked closely with Albright during the Clinton administration, including in preparation for the 1995 United Nations Fourth Conference on Women in Beijing.

“She will be remembered as a tremendous force for the values we share and for the good of the world,” Verveer told The Hoya.

As a young girl, Albright, born Marie Jana Korbelová, fled then-Czechoslovakia shortly after the Nazi invasion. She and her family moved to the United States in 1948 as refugees, and her identity as a refugee remained central to her outlook on the world, Verveer said.

She later graduated from Wellesley College in 1959 before earning her Ph.D. from Columbia University in 1975.

Albright received the Presidential Medal of Freedom — the nation’s highest civilian honor — in 2012 from former President Barack Obama for being a female trailblazer in diplomacy and helping bring peace to the Balkans.

For the past several years, Albright taught her famous diplomacy course “America’s National Security Tool Box” at Georgetown each semester. The class was notoriously difficult to get a spot in due to Albright’s popularity among students.

“She had always talked to me about how fulfilling and rewarding being a professor was for her at Georgetown, and she loved the students. She loved her class,” Verveer said. “It was sacrosanct.”

Students who took Albright’s course recall her humor and mentorship. Every semester, Albright hosted lunches to get to know each student and would attend the final simulation dressed in character by wearing a commander jacket, they recalled.

Julie Antão (SFS ’20, GRD ’23), a student in Albright’s class in spring 2020, recalls Albright’s grace and empathy, adding that Albright was incredibly grounded and invested in her students.

“She would never in a million years use her title. She made us call her ‘professor,’” Antão told The Hoya. “It really shows how humble and how special someone like that can be.”

One of the highlights of learning from Albright was listening to her tell stories about her career in diplomacy, Antão said.

“She would make you laugh, unlike any other person,” Antão said. “She would tell you these most absurd stories, and you wouldn’t even believe that they were true. They obviously were.”

Alexis Tercero-Chacón (GRD ’19), a teaching assistant in Albright’s spring 2019 course, said Albright made a point to mentor her students.

“She truly cared about seeing her students and not just in the classroom, but also in a more informal setting,” Tercero-Chacón said. “Making sure that the lessons learned were passed onto future generations — I think that’s her biggest impact.”

Georgetown government professor Anthony Arend remembers Albright for her humanity and humility. Arend and Albright were neighbors in Georgetown.

“As great and as iconic a leader as she was, she was a human being that could interact with people on a human level,” Arend said.

In a March 24 statement, Albright’s last graduate student cohort expressed gratitude for the opportunity to learn from her, as well as for the indelible mark she left on them.

“We reaffirm our commitment to promote a more just, fair, and prosperous world in her memory. Secretary Albright championed democracy and the power of multilateralism relentlessly — and we must do the same,” the students wrote. “She also never stopped advocating for women’s rights, human rights, and the right of all people to live free from violence and discrimination. It is our duty to carry on this legacy.”