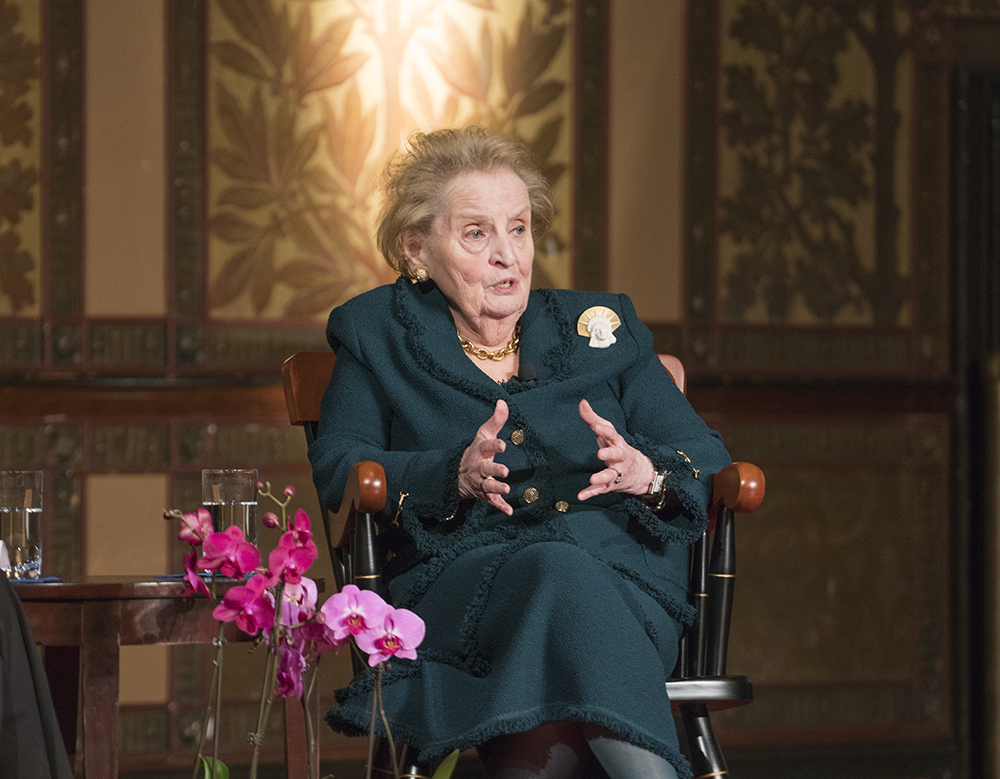 Former Secretary of State Madeleine Albright, a distinguished professor of diplomacy at Georgetown University, received the 2018 Raymond “Jit” Trainor Award for Excellence in the Conduct of Diplomacy at a Gaston Hall ceremony Monday afternoon.

The Jit Trainor Award, named after former registrar of the School of Foreign Service Raymond “Jit” Trainor, is presented annually by Georgetown’s Institute for the Study of Diplomacy. Past recipients of the award include United Nations High Commissioner for Human Rights Zeid Ra’ad Al Hussein last year and former Energy Secretary Ernest Moniz in 2016.

In an accompanying lecture titled “Diplomacy in Defense of Democracy,” Albright told a crowd of diplomats and members of the Georgetown community that rising isolationist sentiment poses a significant threat to democracy.

Albright served as the 20th United States ambassador to the United Nations from 1993 to 1997 and as the first female secretary of state from 1997 to 2001 under former President Bill Clinton (SFS ’68). Since 2016, Albright has served as the Michael and Virginia Mortara distinguished professor of diplomacy at the School of Foreign Service. Her commitment to diplomacy and policy advocacy distinguished her for the award, according to an event invitation.

In the lecture, Albright said her diplomacy and policy advocacy have focused on the need to unite theory and practice, which aligns with the mission of the ISD.

“One of the reasons why I was really excited to come to Georgetown to teach was that I had seen that disconnect, and I really was very happy to be a part of working on some connection,” Albright said. “I knew that this university was committed to bringing the communities [of theory and practice] together, and I really am pleased to see that continue.”

Albright also condemned what she said were failures to promote democracy around the world on the part of the administration of President Donald Trump.

“Instead of rebutting and challenging anti-democratic forces across the globe, we now have a president who has become a source of comfort to them,” Albright said. “His administration has also simultaneously expressed disdain for diplomacy and seems content for the United States to take a back seat in international affairs, which has worried our allies and delighted our competitors.”

“Just in the past year, we have seen this administration step away from America’s historic commitment to human rights, withdraw from key international agreements such as the Paris Accords and TPP and transform the U.S. from a partner to a pariah at the United Nations,” Albright said. “It also tried unsuccessfully so far to slash the State Department budget, with the latest proposal announced earlier today.”

According to Albright, the fragile state of international cooperation today mirrors the struggles of previous eras. She noted parallels with the Cold War and the Vietnam War.

“I received my master’s degree some 50 years ago this spring, and like today, it was an era of great turbulence,” Albright said. “Here at home, America was divided along geographic, racial and cultural lines. Overseas, people called our policies arrogant, imperialistic and doomed to fail.”

Bearing the current political situation of the United States in mind, she argued that defending democratic ideals should be a cornerstone of American foreign policy, undeterred by the proliferation of anti-democratic propaganda on social media by authoritarian states like Russia.

“Social media has disaggregated voices and made governing more difficult, and in recent years, it has been co-opted by freedom’s foes, who are now adept at polluting social media platforms with rumors, disinformation and authoritarian propaganda,” Albright said. “All this led people to declare that democracy is in crisis.”

While all of these factors present unique challenges, the United States and NATO must not fully retreat from their duties of promoting democracy around the world, Albright said.

“It recalls the narrow-visioned naysayers who flourished in the 1920s and 1930s, the people who rejected the League of Nations, embraced protectionism, downplayed the rise of fascism, opposed help to the victims of aggression and ultimately endangered our own security, claiming all the while that all they were doing was putting America first,” Albright said. “The isolationists were wrong in the 1930s, and they are wrong now.”