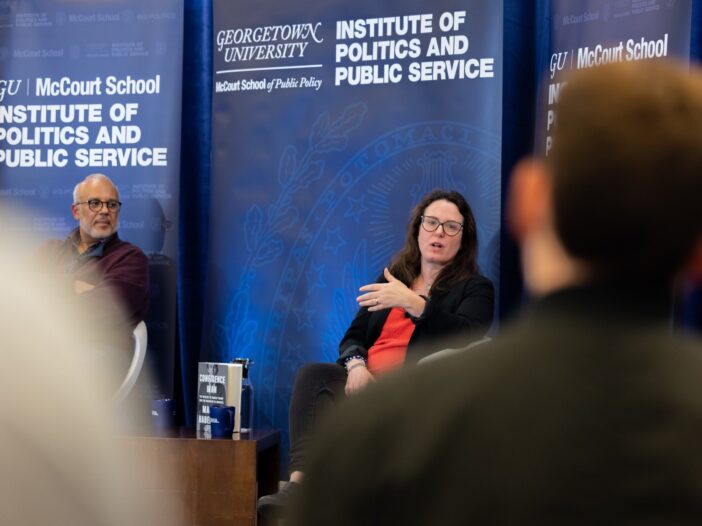 The event, titled “Political Pageturners: ‘Confidence Man’ with Maggie Haberman,” featured Haberman, a New York Times senior political reporter and CNN contributor, in conversation with Mo Elleithee (SFS ’94), the executive director of GU Politics. At the event Haberman spoke about her new book “Confidence Man: The Making of Donald Trump and the Breaking of American,” which details former president Donald Trump’s rise to power and what it reveals about the nature of American democracy.

According to Haberman, Trump’s consistent and public lying, which created alternate realities for himself and his followers, defined her time covering the former president.

“I think that the fundamental challenge of covering Donald Trump is that none of us has covered a political figure who lies about things big and small the way he does,” Haberman said at the event. “That’s the big challenge.”

Despite receiving backlash from the Republican Party after many candidates he endorsed lost in the 2022 midterm elections, on Nov. 15, Trump formally announced that he will run for president in 2024 during a speech at his Mar-a-Lago Club.

Given her experience extensively interviewing the former president and his allies, Haberman spoke on her predictions about Trump’s 2024 presidential run just a day before his announcement.

Haberman said she expects Trump’s platform will be centered on election denialism, despite a lack of any evidence that there was widespread voter fraud during the 2020 election.

“I think he will double down on the way that we’ve seen him over and over again, I think he’s going to have to continue to say rigged, fake election about 2020,” Haberman said. “Because that’s just what he does. What’s been striking is how many people in his orbit, which is almost all of them, have been asking him to avoid kicking off a campaign, and he just won’t do it, he’s completely settled.”

In “Confidence Man,” Haberman tracks not only Trump’s presidency, but also his rise to cultural prominence in New York City through the political and real estate scenes. Despite his many failed business ventures, Trump’s public persona as a successful businessman was galvanized by his reality television show “The Apprentice,” which, running from 2004 to 2015, depicted him as a jetsetting and divisive boss.

According to Haberman, many people close to Trump say he knows he would not have been elected president without “The Apprentice” because of the image it helped curate of him.

“I asked him the question: would you be president without the apprentice?” Haberman said. “And I think he said it was a good question. But I know from private conversations with people he knows the answer is yes.”

In 2016, Trump gained supporters who resented Barack Obama’s presidency and were still struggling economically after the 2008 financial crisis.

According to Haberman, the voters who helped elect Trump in 2016 continue to back him because he aligns himself against establishment politics and speaks to a sense of victimhood.

“He fights,” Haberman said. “A lot of voters felt very angry for disparate reasons as backlash to the first Black president getting elected. Some of it is post-2008 fiscal crisis, which I don’t think people can understand how much that accelerated an era of mistrust in this country that Trump then accelerated further. So somebody who’s willing to stand up for you and say, ‘You’re right, your suspicions are right, they’re out to get you,’ that feels really good to a lot of voters.”

When asked by a student at the event about how the press can most accurately cover Trump in the future, Haberman said journalists must continue to work to contextualize what he says in order to avoid printing false statements.

“What we need to do is contextualize him,” Haberman said. “And I think the media has really adjusted its aperture to deal with the issue about how we’ve never covered a candidate before who says things that are not true at the clip that he does, the main one being the election in 2020.”

Haberman said she believes that, unless another candidate such as Florida Governor Ron DeSantis proves strong against him, Trump will receive the 2024 presidential nomination from the Republican Party.

“I think that the party is pretty divided,” Haberman said. “And I think the party is about to really be at war with itself, particularly in the Senate, and then aspects of the House leadership. I still think Donald Trump is the front runner for the nomination in the Republican Party, and nothing I have seen has suggested otherwise.”