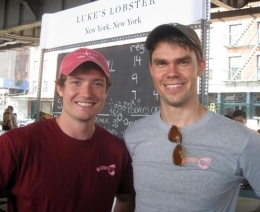 When Luke Holden (MSB ’07) graduated from Georgetown, he joined hordes of his classmates in heading to New York to launch a career in investment banking. Later this month, his job will bring him back to Washington, only he will be trading seafood, not stocks.

On May 26, Holden and his younger brother, Bryan, both originally from Maine, will open the fourth location of the Luke’s Lobster restaurant group. In 2009 Luke Holden opened the first Luke’s Lobster in New York’s East Village, and since then, he has opened other locations on Manhattan’s Upper East Side and Upper West Side, with a Financial District restaurant set to open shortly after the Washington store.

The Washington restaurant will be located at 624 E St. NW in the Penn Quarter neighborhood, near the Verizon Center.

As in Luke’s Lobster’s other stores, the Penn Quarter spot will offer the restaurant’s signature lobster rolls and other seafood specialties.

“The star of the show will certainly still be the lobster roll. We’ll continue to serve Maine crab and shrimp rolls, and chowders and bisques, and our sodas that also come from Maine,” Holden said. “We feel like we have the business model that we’re always adapting, and we don’t really feel we need to change that.”

All of the lobster meat that goes into Luke’s Lobster’s dishes comes straight from the Maine coast, where his father owns a processing plant in Portland. Holden’s business truly is a family affair: His father sources the fish, shrimp and crab from Maine fishermen, and then ships them directly to his son. “We’re really the only company that has a ‘trap to table’ level of offering,” Holden said.

Luke’s Lobster began two years ago when Holden saw a business opportunity and jumped on it. In sampling Manhattan’s seafood offerings, he found that lobster rolls were generally low-quality and overpriced.

“Pure analysis indicated that the average lobster roll was north of $25 and kind of a crappy product,” he said.

Luke’s Lobster was founded with the goal of delivering a high quality, meaty product at an affordable price, currently just $15.

“We opened the first store in October 2009 in the East Village. It was out of a little 300-square-foot space that I found and kind of created a business model for,” Holden said.

In May 2010, just over six months after opening the East Village store, Luke’s Lobster was ready to expand. “We opened the second restaurant (on the Upper East Side), had a super busy summer and grew the team from 10 to 12 people to 30, 40.”

Around that same time, the company signed the lease on the Penn Quarter space and also purchased several trucks to create “mobile restaurants,” which hit the streets of New York in February and March selling Luke’s Lobster’s signature lobster rolls and other seafood dishes.

As the business has expanded and grown to a point where Holden can devote himself to Luke’s Lobster full-time, he has found himself in a place where he can fulfill a lifelong dream of being involved in the seafood business while also applying the business skills that he developed working in finance and in his studies at Georgetown.

“I went into investment banking because I didn’t know what I wanted to do. I grew up as a lobsterman in a fishing family, so otherwise, I would love to be a lobsterman,” he said.

However, his parents, like many parents of Georgetown students, pushed him towards other paths, encouraging him to pursue a career-oriented internship after his sophomore year on the Hilltop to open up more lucrative employment opportunities than lobstering.

The trade-offs Holden found himself facing are typical of those encountered by young people in coastal New England communities today. Full-time fishermen in Maine struggle to make ends meet with the rising price of coastal real estate, depleted lobster stocks and federal regulations that limit the amounts they can catch every season. Consequently, few young people choose to enter the fishing industry, which traditionally accounted for a large portion of the state’s economy.

With his business, Holden has been able to give back to the Maine lobstering community.

“I absolutely feel like I’m coming full circle now. It will just become more true as we become more involved in stuff in Maine, and now we support the Maine Lobstermen’s Association with donations,” he said.

With more expansion on the horizon, he sees himself at the helm of Luke’s Lobster for a long time to come.

“This is certainly my passion for now,” he said.