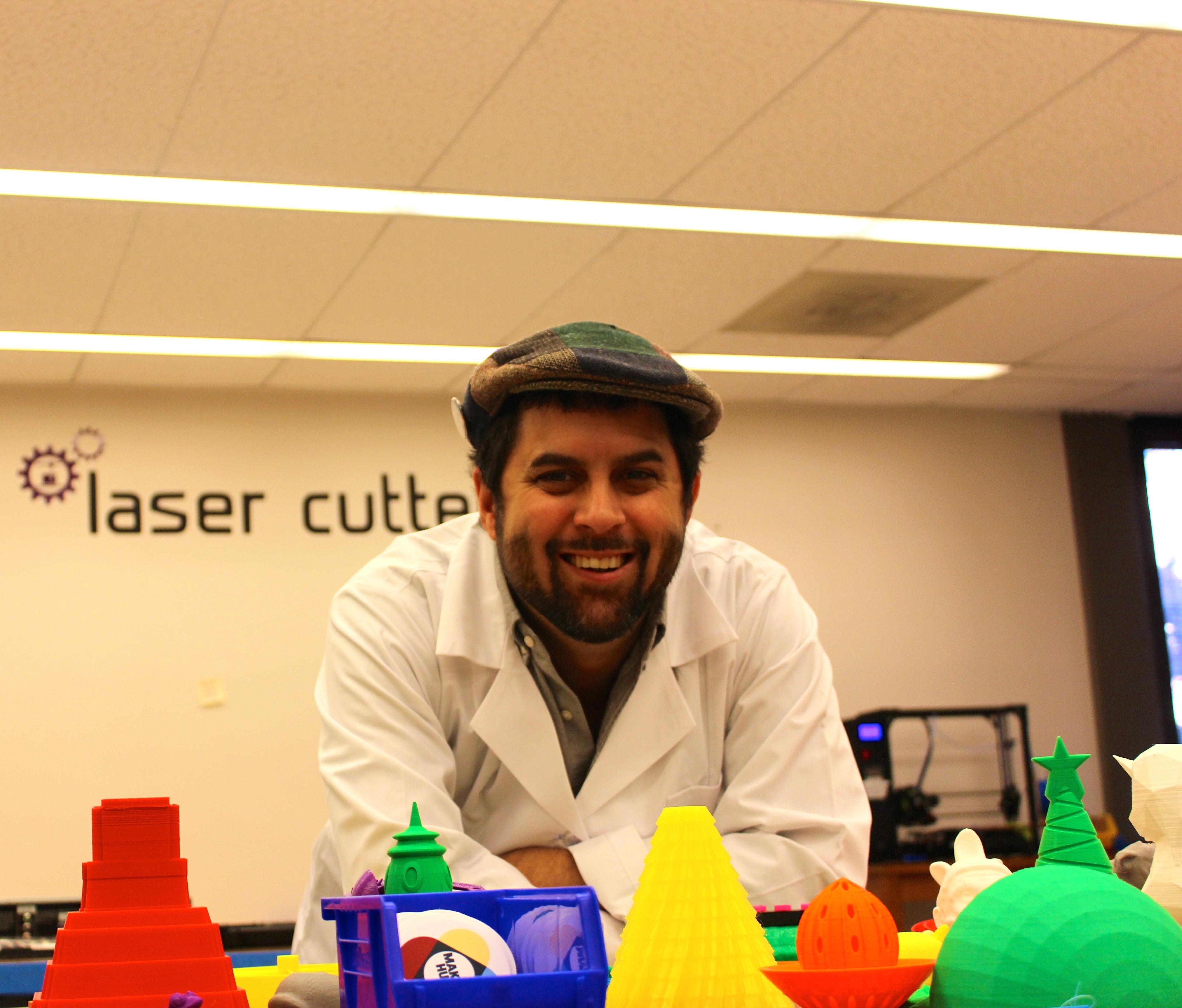 Tristan MacHale (MSB ’19) likes to make things. When he worked at a beach club this summer, he learned basic carpentry skills like fixing doors and building shelves.

“I know my way around a drill and a hammer and all that,” MacHale said.

For MacHale, and others like him, the Maker Hub in Lauinger Library fills a gap in creativity at Georgetown. Inaugurated on Oct. 19, the Hub is a multipurpose workshop where students, faculty and alumni are encouraged to embrace creativity in building their own handicrafts, inventions or prototype products.

Built within two rooms of the library’s first floor and adjacent to the Gelardin New Media Center, the space features four 3-D printers, a sewing machine, classic woodworking tools such as hammers and power drills, a variety of electrical equipment components and even an old-style four-panel folding Dorset loom for making cloth, among other devices.

Don Undeen, the manager of the Hub, previously created the MediaLab at the Metropolitan Museum of Art, an exploratory design space where emerging technologies are examined and tested. Undeen said that this array of tools allows members of the university community to create things independently or in groups according to their own skill.

“It’s very much a [do-it-yourself] space,” Undeen said. “We’re not a service space. People don’t come here with a job and we do it for them.”

Undeen added, however, that aspiring makers would not be left without help. Along with the Hub’s 10 trained staff members, all work-study students, he will offer guidance to visitors.

To use the space, members of the university community need only to sign a waiver. Entrance and use of the Hub’s equipment is free and students are allowed to store creations in personal boxes within the space as they have to pay a fee if they decide to take their creations home — only then are they charged for the university-supplied parts of their device.

The Making of the Maker Hub

Beth Marhanka, head of the GNMC, oversees the operations of the Maker Hub. She explained that the impetus for the space began in 2014, when the university acquired two 3-D printers for the GNMC.

In 2015, these printers were granted their own space, which was then enlarged into a second room this year to accommodate the entirety of the Hub. Pointing from one room to the next, Marhanka explained the current division of the space during an interview with The Hoya.

“People can come in [the idea lab], and it’s an ideation space where you can collaborate and come up with solutions. And then you go in there and make them,” Marhanka said.

At the Hub’s opening event, which attracted about 100 people, Marhanka expressed that the lab was the perfect fit for the Hub, an initiative that she said illustrates Lauinger Library’s commitment to innovation.

“This area used to have shelving in it,” Marhanka said, gesturing at the workbenches, tools and whirring 3D printers. “It was government document stacks, so we’re constantly evolving and trying to figure out what the community wants and needs.”

According to Marhanka, Georgetown’s Maker Hub aligns with the “Maker Movement,” a trend that has been progressing in the United States for at least a decade, bringing together all hands-on craftsmen, inventors, tinkerers and “DIYers” under the banner of a new moniker: the maker.

Heralded by the launch of the niche publication MAKE Magazine in 2005, the movement bonds many of America’s technically savvy and creative demographics, who descend upon the magazine’s “Maker Faires” held throughout the nation. According to Time Magazine, elements represented at these expo events include not only technically savvy 3-D printing expertise and robotics but also crocheting, jewelry making, pickling, beekeeping, sustainable living and much more.

The Atlantic reports that many libraries have developed maker spaces within the past five years. According to Marhanka, the movement has entered about 400 libraries nationwide thus far, with Georgetown modeling its progress after similar spaces at North Carolina State University, Northeastern University and Virginia Commonwealth University.

Marhanka said these spaces and similar developments allow libraries to retain relevance as centers of learning in a digital age.

“Libraries have such an opportunity to kind of evolve and become increasingly relevant to their communities,” Marhanka said.

Marhanka also emphasized the entrepreneurial aspect of the space.

“We’re all about entrepreneurship, so if you want to start a business, come here and make something,” Marhanka said.

After numerous donations, the cost of developing the space totaled less than $10,000. Undeen said the Hub is now seeking to purchase a laser cutter for about $21,000. On the topic of funding, Marhanka said the best way for the space to gain further financial backing is through noticeable student interest.

“I’d like people to know it’s an experiment, and we have to get people in here to make things,” Marhanka said. “And the more people make and take advantage of the space, we’ll get more support.”

For now, creative students like MacHale are simply excited about the space.

“I’ve always been interested in [making things] — I think more so than most kids are. So this is, like, my spot,” MacHale said.