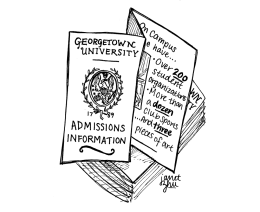 Wellesley College made headlines last week after unveiling the “Sleepwalker,” a 5-foot-9 realist statue of a man wandering around campus wearing only his underwear. Some residents of Wellesley objected to the piece as a potential trigger for survivors of sexual assault or as simply distasteful; others defended the statue as a creative addition to the campus landscape. No matter the sentiment, the fact that students at Wellesley are having this conversation speaks to the ability of artwork to ignite productive debate.

When a chalk rendition of Van Gogh’s “Starry Night” appeared on the walls of Red Square at the end of last semester, the campus community applauded the anonymous artist and his work. However, this drawing also made many Georgetown students realize that works of spontaneous art on our campus are few and far between. A diverse student body like ours is not void of students with artistic ability, but as an institution, Georgetown does not regularly offer many opportunities to share that talent with the wider campus population.

We do not wish to overlook the work of campus artists. The art galleries of the Walsh Building, the first floor of Lauinger Library and Carroll Parlor in Healy Hall boast impressive exhibits of the creative talent on the Hilltop. Our a cappella groups and campus theater organizations produce work of which all Georgetown students should be proud. But despite these individuals’ efforts, it is still unlikely that one would encounter art on campus without seeking it out.

Making campus artwork more publicly available would enable Georgetown students to engage with the wealth of cultural diversity on campus, and the efforts of campus artists would be better realized by the student body.

The Hilltop stands only to gain by encouraging art in the public sphere.