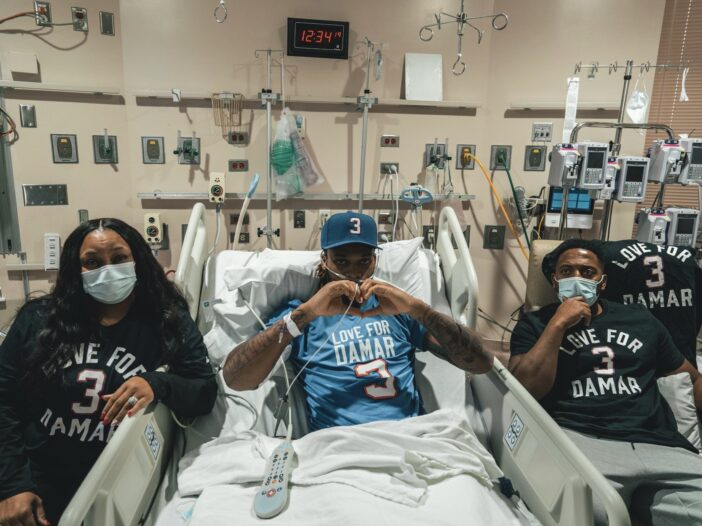 When Buffalo Bills safety Damar Hamlin collapsed because of cardiac arrest after a tackle midway through the team’s Jan. 2 matchup against the Cincinnati Bengals in Week 17 of the NFL season, league officials were faced with the difficult question of how to proceed.

Play was temporarily suspended as medics administered CPR, but players from both sidelines appeared distraught after Hamlin was transported by ambulance to a nearby hospital, placing the prime-time broadcast in limbo.

The NFL ultimately decided to cancel the game after an hour of indecision. Confusion over whose decision it was to suspend play highlighted the league’s lack of awareness surrounding players’ needs and public opinion. Officials even initially told players that they had only five minutes to regroup before continuing the game. Even after outcry from fans, and the media challenging the league’s claims of unilaterally postponing the rest of the game without hesitation, the NFL’s stance only spotlighted incompetence by its decision-makers.

For as long as I can remember, NFL Commissioner Roger Goodell has been a controversial figurehead for the league, drawing harsh criticism for controversial player suspensions and his now-relaxed crackdown on touchdown celebrations.

However, this incident was different.

Not only did it shed light on the league’s failure when not afforded the time to consult with PR specialists on crucial decisions, the injury’s severity and exposure on national television — it was the most-watched Monday Night Football telecast in ESPN history — amplified the impact on players’ and fans’ opinions of the league.

Whether you were a player on the sidelines or, like me, simply following the game on Twitter, you received the same limited information: Hamlin had been evacuated after needing CPR, and it was unclear whether the game would continue. The lack of transparency with which the event unfolded made it a recipe for a public spectacle that drew unanimous sympathy.

The problem was clear: a teammate and competitor had been hospitalized, leaving both teams in a state impossible to resume play. The solution was similarly clear: suspend or postpone the game to a later date. However, the complete lack of transparency with which the NFL approached the situation made it anything but clear.

ESPN commentators reported that the league had given both teams five minutes to warm up before the resumption of the game. The NFL denied those claims, but ESPN had direct communications with the league at the time.

The league had over half an hour before the game was officially suspended to debunk the announcement, and players were seen warming up despite being visibly upset. Denying the obvious live on over 23 million TV sets in America, and then subsequently attempting to retcon the narrative to frame themselves as benevolent, was the NFL’s critical mistake.

When it surfaced that the Bills’ and Bengals’ coaches, and not the NFL, had been responsible for stopping the game, the NFL was rightfully left alone in its corner of the ring. Fans sided with Hamlin, and players and coaches prioritized their own needs in spite of the league’s ambivalence. Meanwhile, all the NFL did was delay and deny. Even a well-manicured statement by Commissioner Goodell did little to convince the public that the NFL was on the players’ side.

Generous outpourings of support continued as Hamlin recovered in the hospital. Fans donated over $8.9 million to The Chasing M’s Foundation Charitable Fund, a charity founded by Hamlin. Teams across the league rallied around the slogan “Love for Damar,” and players from opposing teams joined in prayer for their fellow player during Week 18 games. The NFL worked with the Bills to adjust Hamlin’s contract so his salary would remain unchanged while on injured reserve. And, most importantly, Hamlin was discharged from the University of Cincinnati Medical Center on Jan. 11, though his treatment continues back home in Buffalo.

Despite the happy ending, it’s important to recognize the disgrace with which the league handled the situation. The league made a tremendous mistake, was forced to reverse its decision after pushback, and then denied that it had been made in the first place. Still, the horrifying images remain seared in the minds of millions, confirming the perception of a league focused more on its profits than its players.

Unless something drastic changes with how the NFL approaches these situations in the future, it will continue to fail its players.

Benjamin Manens is a first-year in the SFS. A League for Whom? is published online and in print every three weeks.