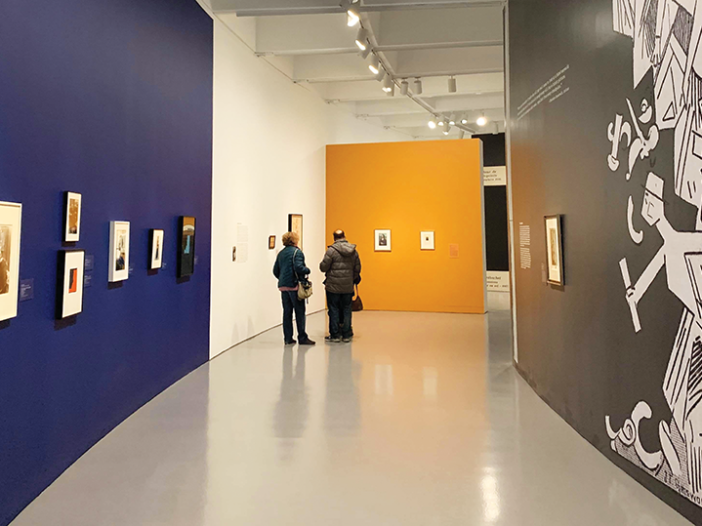 Contemporary art always brings out visceral feelings about the definition of art — to some people, a wheel sitting on a stool could never be considered art. As a foil to this belief, Marcel Duchamp (1887-1968) was a French artist who played a pivotal role in pushing the conceptual nature of modern art. Duchamp’s artistic contributions and influence can be explored in a new exhibit at the Smithsonian’s Hirshhorn Museum and Sculpture Garden that thoroughly covers his whole career without making his artistry inaccessible and appear as an artifact of the past.

“Marcel Duchamp: The Barbara and Aaron Levine Collection,” on display until Oct. 15, 2020, presents over 50 works by and relating to Duchamp and catalogs the progression of his career, from simple sketches to the readymade works that cemented his legacy. The exhibit, promised to the museum by Barbara and Aaron Levine, art collectors and avid Duchamp fans, walks visitors through Duchamp’s career and explores the ways in which he impacted and questioned modern art.

Upon entering the exhibit, the first piece is a black and white film of Duchamp shot by Andy Warhol. Duchamp is smoking a cigar and mischievously glancing around and engaging with people off camera. This filmed portrait confronts museum visitors with Duchamp’s personality — self-assured, humorous and unbothered by the outside gaze — before viewing his work. These characteristics fueled his artistic practice and his tendency to use his art as commentary or mockery. The first room of the exhibit holds only this video and a timeline of Duchamp’s life, and some rooms feel slightly empty as a way to spread the collection out through the entire exhibit space.

The first full room of Duchamp’s work focuses on Dada, an artistic movement that questioned common assumptions about art, like the notion that art must be beautiful to be art. Duchamp is considered a pioneer of the Dada movement, specifically because of his conception of readymade art, an art form that manipulates pre-made objects rather than creating something new. By creating readymade art, artists can pull objects out of their ordinary contexts and elevate them to a conceptual level. The Hirshhorn exhibit notably features Duchamp’s “Hat Rack,” which dangles from the ceiling, rendering it practically useless but thought-provoking.

This sort of work is representative of Duchamp’s focus on the mind rather than the eye. As he has famously said — and as is projected onto the wall of this exhibit — “I don’t believe in art. I believe in the artist.” Duchamp believed that ideas themselves were paramount and inspired people to question intention rather than technical skills when evaluating artwork, according to the placards around the room.

Another compelling facet of Duchamp’s work is his exploration with optical experiments. Duchamp cared more about the concept of art than the look of it — he disliked retinal, or simply visual, art, according to the exhibit — and used optical artwork to try to alter the way that viewers saw his work. Several of these pieces line the halls and some of the optical illusions he created play on a projected loop so that visitors can visualize his intentions; the projections fill the at times bare exhibit and transform the exhibit space into a fully immersive experience.

The final room of the exhibit brings the story of Duchamp’s growth full circle by presenting works done about or inspired by Duchamp, allowing viewers to interact with his ideas. Duchamp was obsessed with chess, particularly during the later years of his life, so visitors are encouraged to sit at one of two chess sets and play with one another. The exhibit also boasts a station where visitors can sketch their portraits in profile and hang it up as a means of contributing to the notion of Duchamp’s continued legacy.

If visitors are attuned to the nuances of this exhibit — read the plaques, process the changes in expression across Duchamp’s career — the exhibit provides a fascinating and intimate look into the artist’s growth and impact on modern art.

However, if they simply stroll through the rooms, they likely will not glean as much; despite Duchamp’s contrarian, controversial artistic tendencies, the exhibit is simple, almost bare. Unless you care to pay attention, this layout does not do Duchamp justice, particularly considering his focus on stimulating the mind and shirking usual forms of tradition.

Duchamp’s beliefs and his work have defined our impression of contemporary art and a careful exploration of “Marcel Duchamp: The Barbara and Aaron Levine Collection” will allow viewers an intimate, unprecedented look into his growth and influence. His work spans a broad range that can at times seem hard to fully digest or evaluate, but its status as art remains undisputable, according to Duchamp himself.

“Art may be bad, good or indifferent, but, whatever adjective is used, we must call it art,” Duchamp said.