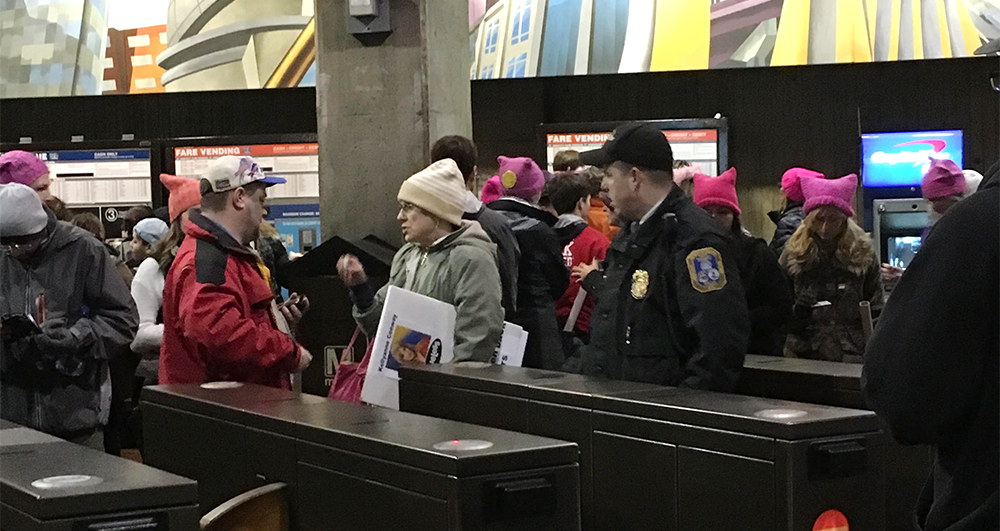 Washington Metropolitan Area Transit Authority users faced long lines and extended wait times Saturday with around 500,000 people using the service, including many demonstrators from across the country who poured into the city for the Women’s March on Washington.

In an internal email provided to The Hoya, WMATA General Manager and CEO Paul Wiedefeld said the Metro system saw elevated ridership numbers over the weekend. Between Friday and Saturday, Metro transit, which include trains, buses and paratransit, saw over 2 million passenger trips, according to Wiedefeld.

He also told employees that Saturday marked the second-busiest day in Metro’s history with over 1,001,613 entries into the rail system.

The statistic WMATA provided for this Saturday’s ridership recorded the total number of SmarTrip card swipes in one day. If each Metro passenger used the system both to travel to and from an event, the number of passengers who used the system is closer to 500,000.

Another measure of traffic is the availability of spots at Metro parking lots and garages. At about 10:30 a.m. Friday, only two parking stations were above 60 percent capacity. By comparison, at 10 a.m. Saturday, 20 stations were at or above capacity, per the WMATA Twitter account.

Despite adding more than a dozen trains on the Red and Orange Lines and advancing opening times by two hours, Metro infrastructure experienced a considerable uptick in traffic, leaving riders waiting several hours for trains around the march’s perimeter.

In light of several challenges the Metro system has faced in recent years, including derailments at the East Falls Church and Metro Center stations in August 2015 and July 2016, Wiedefeld highlighted his pride in Metro use over the weekend.

“This success is especially impressive given the monumental challenge of sustaining such an operation over back-to-back days, along with the logistical challenges that come from national special security events,” Wiedefeld wrote in the email.

James Zhang (MSB ’19), who rode the Metro for both the inauguration and Women’s March, said there was a noticeable difference in traffic between Friday and Saturday.

“During inauguration, we left campus around 6 a.m. because I assumed that the Metro and the streets would be packed with people either protesting or going to inauguration,” Zhang said. “When we got to the Dupont station, a pretty empty subway train rolled up to the platform. If I recall correctly, there were probably about four other people in our car.”

“When we left campus at 10:30 [a.m.], there were already groups of people walking into D.C. from across the Key Bridge,” Zhang said. “When we got to the platform, we waited for about an hour for a train that could squeeze in four people.”

Although WMATA did not provide an official figure for Friday’s traffic, the bureau gave an 11 a.m. update on its official Twitter account, saying that 275,000 trips had been taken, compared to 193,000 trips at the same time the previous day.

Mitali Mathur (SFS ’19), who attended the protest using Metro Saturday, said the enhanced schedule and service was not sufficient for the high influx of riders attending the protest, but that the atmosphere was amenable.

Other transportation modes were similarly affected by the high demand caused by the protest. Kristin Davis (COL ’19), who used the ride-hailing service Uber both days, expressed shock at the Saturday fare surcharge.

“For the Women’s March, there was a considerable price surge and I had to run to a different location to meet the Uber driver to be picked up,” Davis said. “It was really difficult to get an Uber back.”

In recent days, attempts to estimate crowd sizes at the inauguration and the Women’s March generated debate and tension between the White House and media outlets. White House Press Secretary Sean Spicer challenged crowd estimates in a press conference Saturday.

“This was the largest audience to ever witness an inauguration — period — both in person and around the globe,” Spicer said.

This claim, which WMATA figures disprove, has been debunked by multiple media outlets.