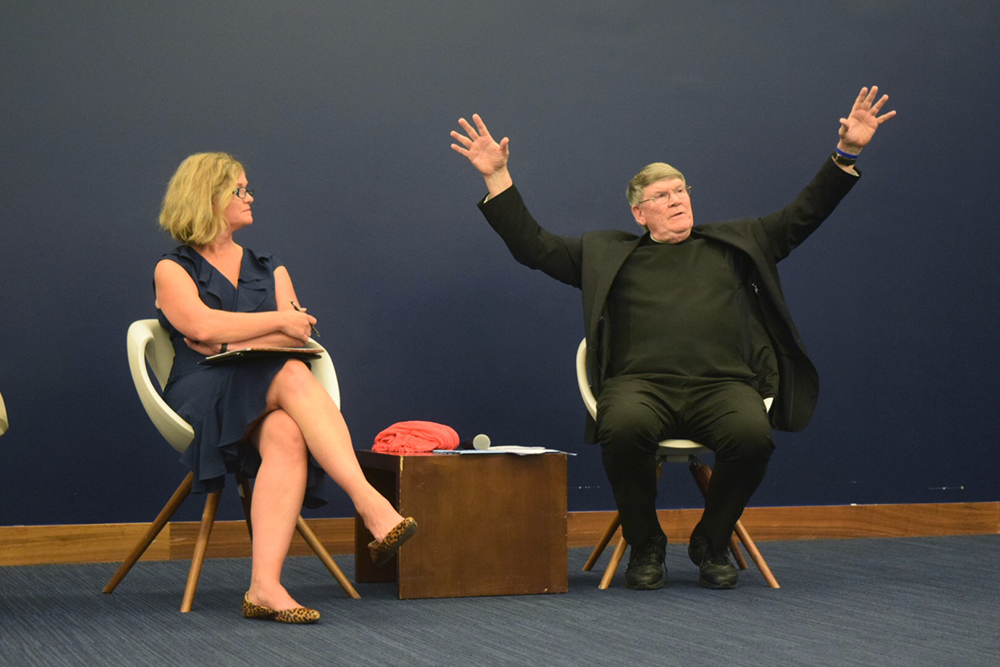 Religious anti-abortion language damages the pro-life movement, March for Life President Jeanne Mancini said at a panel Tuesday focusing on the intersection of politics, religion and the pro-abortion rights movement.

John Carr, the director of the Initiative on Catholic Social Thought and Public Life, moderated the discussion, which included Mancini, Reverend Monsignor John Enzler, the president and CEO of Catholic Charities and Charles Camosy, who is part of the leadership team for Democrats for Life and author of “Beyond the Abortion Wars: A Way Forward for a New Generation”

“I do think it’s the human rights abuse of our time, and I am comfortable using that language, although I totally respect coming at it from a theological perspective, which is even more beautiful than speaking from a philosophical perspective,” Mancini said. “But I think that in the public square, using the language of philosophy and natural law is a lot more effective.”

The politics of abortion feed into partisan division that discourages people from supporting the pro-life movement, even if they hold some of the requisite views, according to Camosy.

“The dominant pro-life movement is so tied to a kind of politics that young people are disproportionately rejecting, and young people don’t even identify themselves as pro-life, even though they hold views that you would call pro-life,” Camosy said.

Enzler expressed concerns that controversies about political and religious ideas surrounding abortion obscure the point of the pro-life movement, which she said is to protect unborn children.

Democrats have neglected to consider the policy items of the pro-life movement, specifically in regards to abortion, according to Mancini.

“Abortion is the first social justice issue,” Mancini said. “Social justice begins in the womb, and Democrats are supposed to be the social justice party, but at this stage in the game this specific issue has become so nuanced in such a negative and false way that it’s like they won’t even touch it with a ten-foot pole. It really, really breaks my heart.”

“He became the first presidential candidate in the history of our country to talk about abortion in a way that was really hard to listen to—and very honest—and to me it meant a lot because candidates usually lack the courage to really address the issue, and he won my vote in that moment,” Mancini said.

Trump “has been way better on short-term and frankly reversible policies than I expected him to be and he deserves credit for that,” Camosy said.

Despite Camosy’s support for Trump’s pro-life policies, he said that the President should alter his attitude towards women and their role in the abortion issue.

“I don’t even think that we ought to talk about abortion without talking about women in the same sentence. And Trump is a complete disaster when it comes to women,” Camosy said.

Policies such as paid family leave that ease the burden of parenting could help the pro-life movement by reducing the demand for abortions, according to Camosy.

“We’re the only developed country in the world that doesn’t have some sort of paid family leave. We have hopelessly expensive childcare,” Camosy said. “We don’t have enough protections at work for women based on family status. So, these are all things that I think we can do in addition to trying to pass 20-week bans and waiting periods and everything.”

Pope Francis brought discussions about abortion into the mainstream for Catholics, allowing pro-life advocates to use religious language to complement their advocacy efforts, Camosy said.

“Pope Francis gives us the sense that we don’t need to check our faith at the door when talking about these things, we can have the gospel at the front of our lips, not at the back of our minds, and be effective,” Camosy said. “When we don’t do that, when we translate our language and our strategies into the ways that frankly, this town [D.C.] wants us to, I think we risk idolatry.”

Despite the partisan nature of the topic, Mancini said the pro-life movement still has the potential for success due to the position’s backing of the church.