Nestled in a tiny brick building in the H Street Corridor is Gallery O on H, an art gallery and event space. 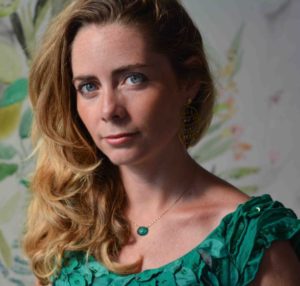 Inside the welcoming front door resides the enchanting exhibit “Melancholia” by Marion Colomer, a French painter.

Colomer is originally from Paris but has studied in New York, New Delhi and now Washington, D.C. She currently has residency at the Fillmore School in Georgetown.

The 14 works in the gallery, all in the same series, look similar at a glance: a sketched nude figure or two posed erotically and surrounded by what the artist calls “an Edenic lush jungle.” On further inspection, however, each piece is distinct.

The figures, black and white and drawn in light pencil, are depicted, as Colomer wrote, in the “height of their desire … entwined in a carnal sexuality.” The colors of the background’s foliage, in contrast with the stark white of the figures, create a tension in which Colomer thrives.

A closer look reveals a wolf’s head on some of the figures and a foreground littered with skulls. Colomer also embroidered sequins into some of pieces. These eerie additions may seem nonsensical, but in the context of the work, the touches add an additional layer of meaning.

The contradicting elements of “Melancholia” are meant to encourage the viewer to question sexual desire and passion. The figures, stripped of color and placed against a lone background, become “divested of meaning, lifted out of the realm of the pornographic, and detoxified in the soft renderings of drawn bodies, their expressions reflecting the melancholy of lost desire,” according to Colomer’s site.

The smell of the gallery — an easily-overlooked element of the exhibit — adds a subtle fullness.  Colomer worked with Dana El Masri, a perfumer in New York City, to create an original scent to complement the artwork. The earthy aroma immerses the viewer in the art and makes it come alive.

Her work is primarily based on figurative painting, anchoring it in the physical world. This method of painting is one of the most ancient, but Colomer explores how it “can still behold an interpretive vision of the world,” according to her site.

Since the impressionist period, many modern painters have chosen to stop practicing figurative painting, as they believed realistic representation could be better captured through photography. However, Colomer’s take on this style cannot be reproduced by a staged photo. There is a dreamlike quality to “Melancholia” that gives Colomer’s realistic figures a fresh, abstract edge.

This melding of the real and the interpretive plays a key role in all of Colomer’s works, as demonstrated by her juxtaposition of realism with imagery. Combining the explicit sexuality represented in her paintings with objects associated with gender norms, such as embroidery, plays with the relationship between sex, life and everything in between.

Colomer’s time in India has clearly influenced both the subjects and the methods of her work, as exemplified by the frequent combination of embroidery and painting. The embroideries “are a symbolic way for her to exchange and collaborate with local [Indian] craftsmen and artisans as well understand Indian culture, more so than to beautify by decorating the painting,” according to her website. By weaving together the French and Indian influences in her art, Colomer creates a complex and captivating piece.

Currently, Colomer is doing conservation work in the United States Capitol building to restore the Brumidi Corridor murals on the first floor of the Senate wing, originally painted in 1859.

Colomer created “Melancholia” in 2016 alongside another intriguing exhibition titled “Birds.” “Melancholia” was shown at the Arlington Arts Center last December before opening at Gallery O on H last Friday.

This small gallery is ideal for “Melancholia.” The bustle of H Street outside fades away as you step into the brick building, in which you are confronted by clean white walls and a soothing smell. This atmosphere allows the viewer to relax and truly look at the art without becoming overwhelmed.

In addition to its role as an art space, the gallery hosts concerts, events and weddings in the courtyard when the weather is warmer, cultivating a hub for creativity and community. The owners take inspiration from New Orleans in their decorating, as is reflected in the casual vibe of the space.

The area surrounding the gallery is almost as intriguing as the work inside. The H Street Corridor has been the subject of an intense revitalization since 2003, creating an enticing space for young families to live, dine and, of course, view art. Gallery O on H is not alone in bringing art to this hip, new neighborhood; instead, it complements the other establishments. Simply walking down H Street is an aesthetic experience.

“Melancholia” is full of surprises and new perspectives on sexuality and representations of reality. The exhibit’s excitement and beauty are captivating, and visitors will be intrigued from the moment they step in.