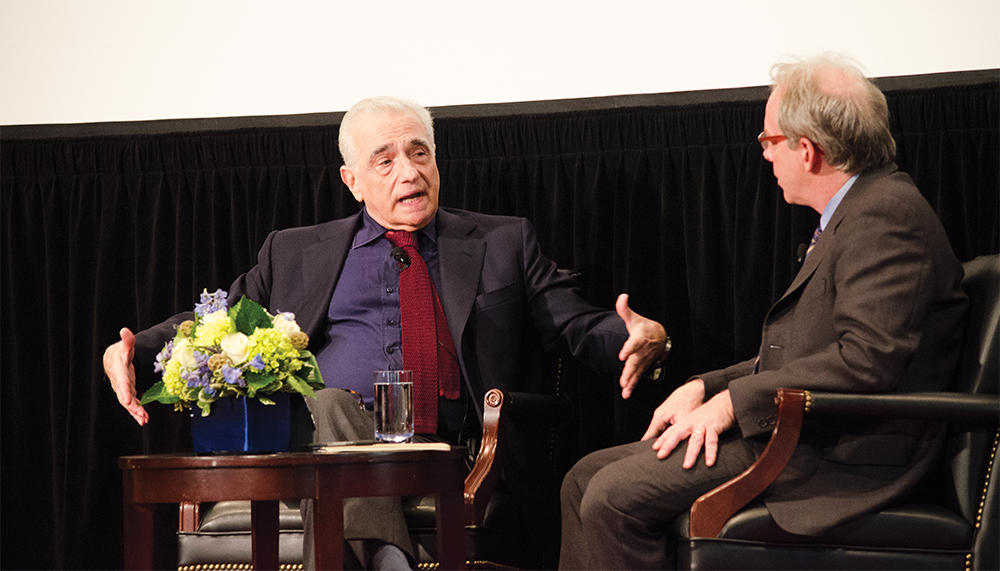 Acclaimed director Martin Scorsese has become the first filmmaker to participate in Georgetown’s Faith and Culture Lecture Series. On April 11, Scorsese joined University President DeGioia and Berkeley Center for Religion, Peace and World Affairs senior fellow Paul Elie in conversation about “Silence,” his most recent film, discussing the relationship between religion and culture.

Launched in 2007, Georgetown’s Faith and Culture Lecture Series has brought numerous distinguished authors to campus over the past 10 years to reflect on their work in the context of the engagement of faith with culture. Past guests have included Marilynne Robinson, Richard Rodriguez, Christian Wiman, David Gregory and, most recently, Chimamanda Ngozi Adichie.

The Gaston Hall event opened with a screening of the film, followed by DeGioia’s introductory remarks, a conversation with Scorsese and finally a question-and-answer session moderated by Elie.

“Silence” is inspired by the 1966 eponymous novel by Japanese author Shūsaku Endō, who received an honorary degree from Georgetown University in 1987 and donated a series of original manuscripts to the university’s library.

Georgetown faculty also played a role in the film: Associate professor and director of doctoral studies Fr. David Collins, S.J., served as a historical consultant on the film. Additionally, a new wave of enthusiasm for the scholarship of Chair of Catholic Social Thought Peter Phan has emerged, due to the close connection between his studies on Christianity in Asia and the film’s overarching themes, such as Catholic missionaries in Japan and government bans on Christianity by the Japanese government.

The film recounts the story of two 17th-century Portuguese Catholic missionaries, played by Andrew Garfield and Adam Driver, who travel to Japan in search of their long-lost mentor, played by Liam Neeson. At a time when Catholicism was outlawed and the presence of priests was forbidden in Japan, Garfield’s character, Father Sebastião Rodrigues, the protagonist of the film, must challenge his faith and relationship with God.

DeGioia introduced Scorsese by remembering the director’s remarks during his 2013 Jefferson Lecture in the Humanities at the John F. Kennedy Center for the Performing Arts, where he said, “We are living through the emotional truths on the screen today. We are experiencing these things that we normally couldn’t discuss, or wouldn’t discuss, or even acknowledge in our lives.”

Elie and Scorsese began their conversation about “Silence” on a light note, with the director jokingly confessing that it was “rather daunting to be in this extraordinary hall,” as the stained glass and allegorical frescoes made Georgetown’s connection to the themes of faith, religion and culture explored in the film even more relevant.

Scorsese began by discussing his choice of filmmaking as his main medium to explore difficult subjects, such as social inequality and corruption.

“The venue itself, making movies, that just happens to be the way I ended up finding a way to express myself. I wasn’t writing — I didn’t come from a book or painting culture — and being asthmatic in 1945, as a member of middle-class family, I couldn’t get into sports. But I took into the movies, so with cinema itself, with Hollywood films and Italian films, and I was able to experience certain things that, as with many, in the family we couldn’t talk about openly, but we experienced them together. And you could play out these things and see people playing them out,” Scorsese said.

In terms of his initial influences for “Silence,” the director remembered some of his earliest encounters with religion and his reflections about the meaning of “sacred power.”

“I saw these priests performing sacraments and saying Mass: The power of the Church is transubstantiation, pretty strong, how do you pass that to a human being, having power? To a young person growing up seeing that, that is a special person, and yet, one, if you have that power, if you have been bestowed with that power, then you can’t be proud of it,” Scorsese said.

Scorsese reflected on the role of personal pride in the exercising of religious authority and on the essence of Christianity.

“You have to get past your own pride. I think that’s ultimately what happens to Rodrigues, all that he’s learned in his moral sense of his own finite mind, he sees the universe doesn’t work that way. When he [renounces God], he’s reached something else, he’s reached, I think, what the essence of Christianity is to be. He becomes a true Christian,” Scorsese said.

Discussing the differences in culture and faith, Scorsese reflected on the inherent conflict of Jesuit priests challenging the authority of Buddhism and Japanese culture.

Lastly, Elie moderated a brief session of questions from the audience to the director, in which he discussed the pivotal scene of the movie, in which Rodrigues finally steps on the fumie, renouncing his Catholic faith. The Japanese government used the stepping on the fumie as the official symbol of apostasis for Catholic missionaries. The scene highlights the symbolic importance of the object by framing only the fume and Rodrigues’ foot stepping on it.

“It took years to try to figure out how to frame the fume. It took me a long time to strip away everything that I thought was frivoling. I just wanted it to be as clean as possible,” Scorsese said. “It’s just the fume and the foot, and the fume is right there, it’s looking right at us. It’s a direct confrontation. Jesus talks to him and he tells him ‘Step,’ and it’s so clear and precise. You could see—it ripped his heart out to step on that fume. I know, I saw it,” Scorsese said.

The event offered a stimulating conversation and reflection about the intersections between the sacred and the profane and the meaning of faith. The discussion of good and evil and holy and blasphemous lingered as the crowd rose in a standing ovation to the director. Humbled, Scorsese concluded, “If I could say it, why would I make the movies?”