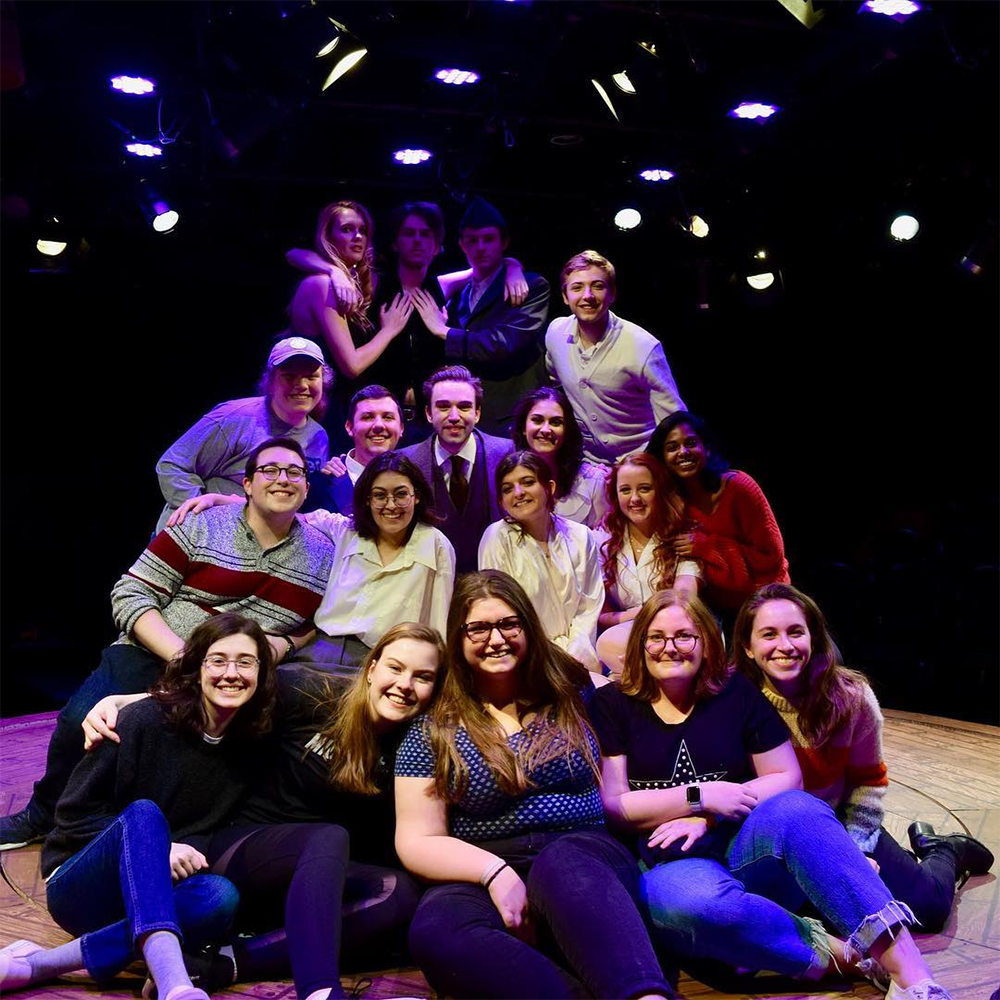 Mask and Bauble’s spring musical “Hello Again” is a rumination on romance. Based on Arthur Schnitzler’s 1897 play “La Ronde,” the show explores the entanglement of love and lust through a series of 10 two-person vignettes that bleed into one another. After each scene, the pursued becomes the pursuer and moves into the following scene to encounter their next lover. A circle of seduction woven through with romance and rejection, “Hello Again” is a bold and sometimes shockingly intimate production.

“Hello Again” is an atypical musical. The play casts aside the standard linear plot in that the characters have no names and it only features two actors at a time. These innovative choices, while surprising, are fascinatingly powerful.

The daisy chain of vignettes forces the viewers to connect broader themes rather than focusing on specific storylines, and the one-on-one scenes enable palpable emotion between the actors and incite undivided attention from the audience by displaying solely the exchanges and their unfettered emotion on the stage.

In the first scene of the show, “The Whore and The Soldier,” an American soldier is approached and seduced by a prostitute. After their scene ends, the show quickly transitions to “The Soldier and The Nurse.” This scene takes place 40 years later, with the soldier now having his eyes on a nurse. Although a new scene, the soldier acts as if in reaction to his experience with the prostitute.

The rest of the show follows in a similar manner, inspiring consideration of how each person’s experiences color the rest of their lives, according to Christian Collier (COL ’19, GRD ’20), who is Mask and Bauble’s publicity director and played the College Boy.

“Be it knowledge, lyrics from prior songs or lines their counterparts said, there is a theme that everyone is somehow connected and their relationships, both sexually and emotionally, are defined by their past experiences,” Collier said.

Unlike most musicals, the format of the show makes it so that none of the characters truly have full character arcs, according to Gabriel Berkowitz (MSB ’20), the show’s director. This style heightens the significance of each scene by forcing each actor to define their character boldly within the structural limits of the show, according to Matt Phillips (COL ’22), who played the Husband.

“As an actor, [the show’s] construction helps you to focus your energies: Each of these characters is featured in two scenes, and the task and the hope is to create a coherent person — and tack onto the story as it continues along — in a short amount of time,” Phillips said.

An eerie, often sparse soundtrack emphasizes the tension between the characters as they grapple with their emotions and impulses, according to Colum Goebelbecker (COL ’21), who played the Soldier.

“The score of ‘Hello Again’ is full of dissonance — underlying music with superimposed dialogue — and is at times devoid of harmony and melody,” Goebelbecker said.

The music also served to highlight the time differences between the scenes, as dance moves and musical tones were matched to different decades. Ashanee Kottage (SFS ’22), the show’s choreographer, studied nine different types of dance in nine respective decades in order to prepare. She also researched how physical cues, such as women’s hip movements, have evolved to ensure the show accurately reflected each time period.

Beyond the dance choreography, “Hello Again” had another physical aspect not often seen in theater: a high volume of sexual encounters. Each of the 10 scenes featured an intimate interaction between actors, which required extensive choreography and preparation.

“The beginning of the rehearsal process involved building trust between the cast,” Collier said.

Megan Spinella (COL ’19) hopes that the show’s mature content sends a broader message about normalizing sexual interaction through its unabashed portrayal of a wide array of romantic and sexual encounters across a broad span of time.

“Talking and performing about intimacy is important and should no longer be a taboo conversation on our campus,” Spinella said.

Audience members may be surprised or sometimes uncomfortable with the content of the show. “Hello Again” challenges its viewers on their ideas of love, according to Fiona Breslin (SFS ’21), who played the Nurse.

“I would hope that this show makes the audience think about the way we picture love — whether that be in sex, intimacy, conversation or connection,” Breslin said. “There is a lot to be learned from the characters in this show. None of them are perfect lovers, and neither are we.”

“The show asks from us what a lover actually is, and if we ever found it in our chance encounters throughout life,” said Mark Camilli (COL ’19), who played the Senator. “And in those rare moments we think we’ve found a true lover, will we be saying, ‘Hello again?’”

“Hello Again” is a bold and frank look at sex and relationships that will cause audiences to evaluate how they think about the interplay of love and lust.