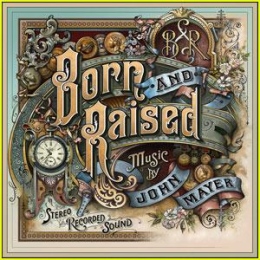 Lately, when you hear the name John Mayer, the first thing you think of may not be his music. His erratic personal behavior and relationships have dominated the tabloids in the last few years, overshadowing his great music and turning slews of fans into enemies. But on his new album, Born and Raised, Mayer takes a bold risk by switching up his traditional pop-friendly style for a country twang to bring his fans back and to start a new chapter of his career and his life.

This new album is, in many ways, a musical apology for these shenanigans — which range from dating and dumping teen country idol Taylor Swift to outrageously oversharing in interviews — but what is most important about this new album is that Mayer does not shy away from his past: He embraces it. On tracks like “Speak for Me,” “Fool to Love You,” and “Whiskey, Whiskey, Whiskey,” he confronts his personal misgivings and presents sincere musical apologies.

Most of the songs on Born and Raised are incredibly heavy handed with this apologetic tone, but surprisingly, it does not get old. Maybe it’s Mayer’s crooning vocals; maybe it’s the simple banjo-laced melodies; maybe it’s the fact that the songs are all independently great. This album, start to finish, is a great example of how an artist can embrace personal struggles, move above the fray and continue to produce great work.

Of the tracks on the album, the most direct response to his critics comes through in “Shadow Days,” which many have interpreted as a response to his musical beatdown by Swift in her smash hit “Dear John.” While Mayer does not go so far as to mention Swift by name, the references to broken hearts and mistaken relationships do not go unnoticed in his mournful lyrics. He sings, “Well, I ain’t no troublemaker, and I never meant her harm. But it doesn’t mean I didn’t make it hard to carry on.” While Swift is the assumed addressee of this regretful message, in reality it could be directed at any number of Mayer’s recent and not-so-recent relationships. His nasty breakup with Jennifer Aniston made tabloid headlines for almost a year.

But ultimately, to whom the apology is addressed matters very little. What matters is that Mayer has branched out musically into a new and fantastic country-fied niche, recognized his personal mistakes and turned them into opportunities for personal growth. If this mature new sound is a reflection of Mayer himself, it seems likely that his womanizing days are done for good.