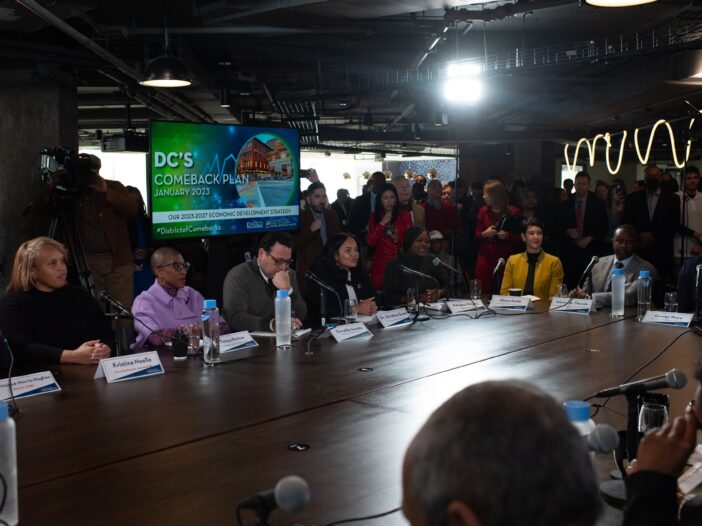 D.C. Mayor Muriel Bowser (D) and the Office of the Deputy Mayor for Planning and Economic Development (DMPED) announced D.C.’s economic goals for the next five years on Jan. 9.

The economic development plan, known as the “Comeback Plan,” highlights six major areas in which to achieve economic growth by 2028. This includes the creation of new jobs in specific sectors and increasing the size of the downtown population.

Bowser said the new plan emphasizes investment in all of the District’s communities to eliminate resource gaps across neighborhoods, such as in food, housing and internet access.

“This is a comeback that is focused on equity,” Bowser said in a Jan. 9 press release. “This is about making sure we have the revenues to support our world-class city services, our robust network of social programs, and the resources — like our schools and rec centers — that keep people in DC.”

Bowser said economic indicators like the revised revenue, recent GDP growth and population increases inspire optimism for the area’s prosperity over the next five years, according to a press release.

“Our priority remains on ensuring every Washingtonian has a fair shot and that we have the resources necessary to address our most pressing challenges, take care of our most vulnerable neighbors, deliver world-class city services, and create new opportunities for residents and businesses,” Bowser said in the Dec. 30 press release.

In the third quarter of 2022, professional, scientific and technical services, sectors which the economic plan will focus on supporting, increased in D.C. and contributed most to the District’s GDP growth.

The Comeback Plan also strives to improve the economic prosperity of Black and minority residents by aiming to have minority-owned employer businesses make up one-third of all businesses, eliminating opportunity gaps and lifting Black residents’ median household income by $25,000.

Black residents make up 45 percent of the D.C. population, however Black-owned businesses make up less than 14 percent of total businesses in D.C., according to the 2017 Annual Business Survey.

Additionally, Black and white Washingtonians face a median household income disparity of over $100k, respectively earning $53,629 and $160,194 annually, as of March 2022.

D.C. has turned to the Vitality Fund, a new multiyear program that incentivizes companies to remain, expand or relocate to the District by supplying funds for basic business costs to local entrepreneurs, to reach its economic goals.

“It will encourage employers to locate in DC and create jobs, bringing the city closer to our job creation goals in high-growth sectors, including technology,” the Jan. 9 press release reads. “Expenses such as rent, tenant improvements, down payment assistance, workforce training, and recruitment can be covered with the program funds.”

Joe Massaua (SFS ’25), a representative of Advisory Neighborhood Commission (ANC) 2E, which oversees the Georgetown, Burleith and Hillandale neighborhoods, said that he looks forward to seeing the plan implemented.

“Mayor Bowser’s ‘comeback plan’ provides great opportunities for investment in our local communities,” Massaua wrote to The Hoya. “I’m excited to work with the Georgetown Community Partnership (GCP) and Georgetown Main Streets (GMS) to craft solutions for the Georgetown neighborhood.”

Bowser said the Comeback Plan aims to provide people from all backgrounds with greater access to the economic opportunities of D.C.

“People stay in and come to Washington, DC because they want to change the world — because they recognize DC as a place where you can bring big ideas to life,” Bowser said in the Jan. 9 press release. “Our comeback is about unlocking the full potential of our people, our neighborhoods, and our businesses.”