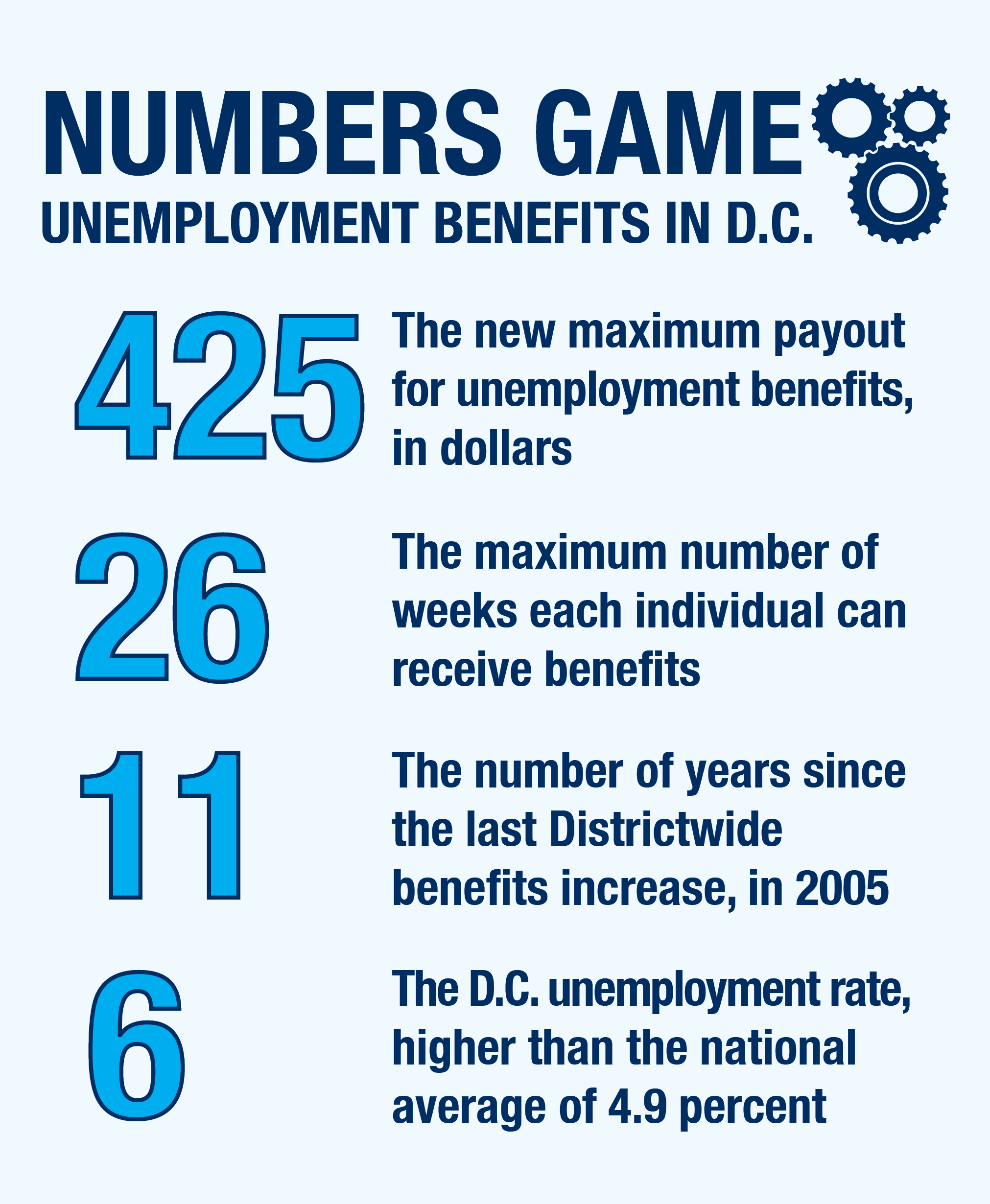 As the unemployment rate in Washington, D.C., continues to hover above the national average, Mayor Muriel Bowser (D) increased benefits for the unemployed in D.C.’s Unemployment Insurance program beginning Oct. 1, implementing the first change to the policy in over a decade.

According to the U.S. Department of Labor’s Bureau of Labor Statistics, D.C. maintained a 6 percent unemployment rate in August, higher than the 4.9 percent national average during the same period, as reported Sept. 20. Overall, the District ranked 46th in terms of unemployment rates per state.

The new benefits affect individuals who lose employment due to layoffs or other factors beyond their control by boosting the maximum weekly benefit amount for eligible claimants from $359 to $425 for as long as 26 weeks, or up to $1,700 monthly for six months.

The changes further include a 14-percent increase in weekly benefit payouts for part-time workers in an effort to assist claimants holding part-time jobs.

The last adjustment in the policy occurred in 2005, when maximum weekly benefits were lifted from $309 to $359.

These gains coincide with Bowser’s push for a higher minimum wage, which resulted in the D.C. Council’s unanimous passage of a plan in June designed to increase the minimum wage to $15 an hour by 2020. The current D.C. minimum wage is $11.50 an hour.

Legal Aid Society of the District of Columbia attorney Drake Hagner, who works for its Public Benefits Law Unit, said the expansion of benefits was long overdue as the District lagged behind other states in maximum weekly benefit amounts, placing 38th out of all states with unemployment benefit systems despite its relatively high living costs.

“It’s been far too long,” Hagner said. “The rate has been way, way too low especially given the costs of living in D.C. and the surrounding area, which is where most D.C. workers live.”

Georgetown Center on Education and the Workforce Director of State Initiative Neil Ridley praised the change as unique among what other states are doing to provide longer-term benefits for their residents.

Ridley also said that from its inception, the goal of D.C.’s Unemployment Insurance program was to increase the incomes of unemployed individuals to keep pace with the cost of living in the District.

“Obviously over time, the benefits need to be adjusted due to cost of living and just to make sure it continues to provide partial of the peoples’ living wages,” Ridley said. “D.C. is a city with a high cost of living to begin with.”

“My administration has fought together alongside workers to raise the minimum wage and now increase unemployment benefits for the first time in 11 years,” Bowser said. “This is a huge step toward ensuring District workers and their families are able to better take care of their basic needs while searching for their next employment opportunity.”

Sperling’s BestPlaces, a website that analyzes publishes a ranked cost-of -iving index, which factors in and weighs categories including housing, food and groceries, transportation and utilities. Washington, D.C.’s index, based on the national average of 100, came in at 154.

Professor of history Maurice Jackson said unemployment disproportionately impacts D.C.’s black community, which has an unemployment rate of 15.4 percent, more than double the average District rate in 2015. Jackson predicted that without higher unemployment benefits, more members of the black community would move out of the city.

“You’re going to lose more and more African American people mainly because they can’t afford the cost of living,” Jackson said. “If we want to do anything to guarantee the African-Americans the right to stay here, we have to have increases like this. We have to increase the minimum wage, but also increase job opportunities and trainings. It’s been a long time, but I’ve been unemployed, and these changes all should help.”

Hagner said the cost of the new benefits would not be detrimental to the local economy, stressing that employers will not experience any increase in taxation from the current levels, which were approved by the Department of Labor to finance the expansion.

“When we did the math, D.C. has been too conservative and its unemployed workers have been suffering as a result,” Hagner said. “D.C. can afford to pay more, so this should not harm employers with the exception of certain employers who pay out-of-pocket.”

Jackson said that since its last expansion in 2005, the Unemployment Insurance program has not kept pace with the mounting costs of living in D.C.

“The cost of living is already unduly high, and it’s just getting higher because of so many people that are moving into the city and forcing the prices of houses to go up,” Jackson said. “The Metro has gone up, the price of food has gone up — everything except benefits of people, which should be parallel to cost-of-living triggers. Change is necessary.”