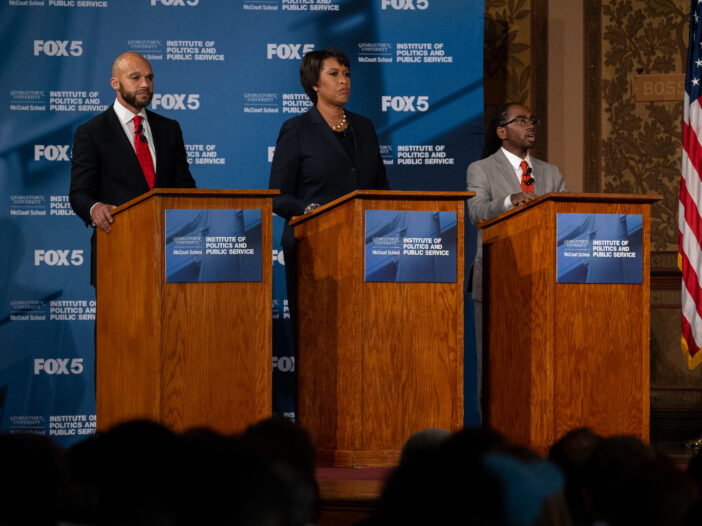 The leading Democratic candidates for Washington, D.C. mayor participated in a debate at Georgetown University’s Gaston Hall ahead of the June 21 primary election and sparred over a variety of topics including public safety, education and affordable housing.

The candidates were given time to respond to the same questions as well as time to discuss and rebut opposing views after each candidate had the chance to answer. The candidates responded to wide-ranging questions, most notably about public safety, affordable housing and lessons learned about inequity during the COVID-19 pandemic.

The moderators opened the debate by pressing Bowser on the increase of violent crime in the District as her adversaries criticized her proposal to increase the number of police officers to solve this issue. According to Robert White, the mayor’s plan to address the increase in violent crime by focusing on police officers rather than violence prevention programs is woefully inadequate.

“People across our city are afraid in every part,” Robert White said during the debate. “And that’s because this violent crime has gone up the past 16 years, and our mayor still has no plan. That’s not fair.”

Bowser said her track record and ability to create solutions have earned her another term as mayor, as opposed to her competitors’ idealistic and impractical plans to reduce police officers and focus on investing in public services.

“There’s a lot of pointing fingers and criticisms,” Bowser said at the debate. “We know that both gentlemen have been on the council for six years and they have had every opportunity to work on public safety and public safety issues. We know what they chose to do is serve an ideology and not the residents of the District of Columbia.”

Trayon White drew from his personal experience growing up in the District to criticize the Bowser administration’s divestment from youth programs and services and argued that this lack of funding has led to an increase in juvenile delinquency.

“I’m a young man who, growing up in this area, is considered an anomaly,” Trayon White said during the debate. “Most people who look like me and come from where I come from don’t make it to become a councilmember.”

When discussing the lack of affordable housing in the District, Robert White attacked Bowser’s funding decisions during her tenure and her inability to create solutions that have significance for District residents.

Robert White instead advocated for focusing on building affordable housing for lower- and lower-middle-class residents and utilizing approaches such as community land trusts and social housing where Bowser has failed.

Trayon White said that he repeatedly receives calls from residents who are unable to find housing despite Bowser’s arguments that she doubled the District’s annual investment in affordable housing throughout her time in office.

“We created more barriers to housing under this administration than the past two administrations combined,” Trayon White said. “If we are saying that we are going to create housing for all or a pathway to the middle class, let’s really do that because it has not happened.”

Bowser argued that her leadership in the past eight years warrants a third consecutive term and that she has the ability to navigate a return to prosperity in a post-pandemic landscape.

“The election is about the D.C. comeback and who you trust to lead it,” Bowser said. “The fact is, I have led this city through a lot. I keep my promises, I do what I say I’m going to do, and I don’t waffle.”