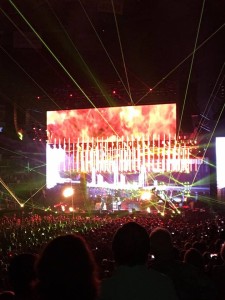 As two pillars stood at either end of the Verizon Center stage, slowly rotating with bright, psychedelic colors, the scene was set for rock legend Paul McCartney to take the stage as part of his “One on One” world tour. The arena gradually filled with middle-aged people whose hair color reflected a narrow gradient between shiny white and distinguished gray. The pillars rotated once more, and an image of four young white men, boasting unblemished skin, black hair and almost baby-like faces, appeared. A cheer rose. This was a pilgrimage into the past — into the temple of the Beatles.
Only one of those young men appeared on stage Sept. 10 at the Verizon Center, and over 50 years had passed since that picture had been taken. When Paul McCartney first appeared on stage, in a haze of bright lights and sparkles, my jaw dropped. The Beatles’ first concert in the United States was in February 1964 in Washington, D.C.; from far enough away, McCartney looked as if he had just stepped off a time machine from that tour date. His jet-black hair looked as though it had hardly aged over the course of the tumultuous past half century, and his boundless energy was a reminder that the man had retained every ounce of his legendary showmanship. He knew what he was doing.

Throughout the set, McCartney interspersed Beatles classics, such as “Can’t Buy Me Love,” which launched people out of their seats in a call back to their ’60s glory days, along with songs from his band, Wings, and his more recent solo repertoire. The latter set drew a more sedate response, including the techno-laced “Temporary Secretary,” which McCartney acknowledged, saying, “I know when you all really like a song, because when we play anything from the Beatles, all the phones go out. But I have you here, so I’ll play whatever I want.”

The monologues throughout the show were endearing, as McCartney dropped the names of his famous music friends, including Eric Clapton and Jimi Hendrix, and paid homage to his wife, Nancy, who was in the audience, with the song “My Valentine.” Perhaps the most touching moment of the concert was McCartney’s back-to-back performances of “Blackbird,” inspired by the civil rights’ movement, and “Here Today,” a song he wrote after the death of John Lennon. The stage appeared to float in the air as the arena filled with darkness, leaving only the crooning McCartney strumming his guitar. 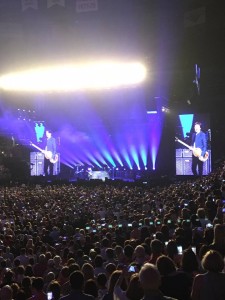 One particular personal highlight was McCartney opening one song by saying, “This is a song we released last year; if you want to sing along, we’ll have the lyrics right behind me.” When he played the opening notes to “FourFiveSeconds,” his collaboration with Kanye West and Rihanna, I thought his line was a joke. Then the lyrics appeared, and everyone around me looked oblivious. He did all the voices, including Kanye’s hoarse voice during the second verse: It was simultaneously hilarious and magical.

The set was long, lasting nearly three hours including the encore. McCartney’s energy never wavered, though, whether it was belting out the familiar words of “Hey Jude” or finishing the side tattoo of an eager fan on stage. When the tour bus exited the arena after the show, he was right at the front waving to all the fans craning in an attempt to catch a glimpse. Shrieks arose. They had seen their deity. The pilgrimage was complete.