I spent most of middle school and high school pursuing things that other people told me I should. In seventh grade, my art teacher told me I was good at drawing, so I drew. In my senior year, my science teacher told me I had a gift for chemistry, so I applied to college as a chemistry major. I don’t mean to say that drawing and chemistry were not enjoyable for me, but much of my self-worth as a student and as an artist came from the validation of others in the form of grades, school awards or Facebook likes on photos of my art. I did not stop to think what it was about science or about art that drew me in; rather, I threw myself into succeeding, believing that by following the directions of others, by doing what I was supposed to do, I would excel.

This attitude proved unsustainable academically and, especially, artistically. I could not create the works I envisioned, but instead created works that I knew others would enjoy. At every step of the creative process, I had to check in with someone else. I’d send a picture to a friend; I’d ask my art teacher for her thoughts; I’d work in the cafeteria, waiting for someone to approach me and validate my work. I questioned my best ideas, preferring to execute the ideas of others. Ultimately, this left me exhausted and uninspired. When others described me as creative, I would deny it, saying that, actually, I was terrible at coming up with ideas. My own ideas did not live up to the standards that I had set for myself. Drawing, painting, and creating became chores that I executed out of necessity.

After my first semester at Georgetown, I realized that my decision to be a chemistry major was not what I really wanted, and that I had also stopped creating. Fall of freshman year, I took a drawing class. I completed all the assignments, drew the still life set-ups and finished the class with little desire to keep drawing. So I didn’t. Apart from the occasional doodle, I was determined that my art career had peaked in high school and that none of my original ideas were worth executing.

My first probe back into art came the summer after freshman year. At home and wanting to counter the hard scientific studies of my physics class, I decided to pick up a pen and start sketching again. I did not think about concepts or accuracy of detail. I just let myself draw without the intention of showing anyone. I have sketchbooks filled with images that are not necessarily expertly observed, well composed, or technically proficient, but that express parts of me at different times: the rocks at my favorite beach, the D.C. metro, the pond at the park near my house. My inspiration came from ordinary moments rather than grandiose concepts.

Entering sophomore year, my classes challenged me academically like they never had before. Instead of art being a source of stress and anxiety in my life, I was able to turn to drawing as a respite, as a time when I could get down on paper what I was thinking, feeling or doing at a certain point in time. I began to show people these works, not for validation, but because I wanted to share these parts of myself with them. This was a dramatic shift from how I had previously operated; I took pride in my work without external validation.

I am now able to use my art as an outlet for any ideas that I have, whether trivial and small or complex and impossible to express verbally. In my painting class last semester, my first piece was depicted two coffee cups; I wanted nothing more than to show how much joy I can get from sharing a cup of coffee with friends. My second piece explored issues of my family history, my identity as a woman and symbolic images that seem to pop up in my life. I do not regard either of these pieces as better or more important, but rather they are two manifestations of how I can use art for myself. I do not wish to sell my art or make art for a living, but rather I wish to continue to live and create. The images are enough for me. 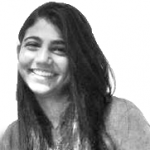 Maya McCoy is a junior in the College. Life in Art is a rotating column appearing every other Friday.