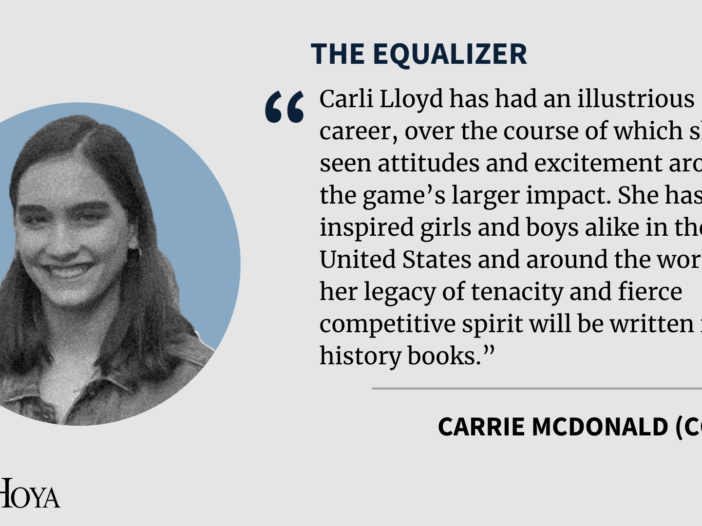 Wearing the captain’s armband, Carli Lloyd stepped out onto the soccer field to represent the United States for the 300th time in the U.S. women’s match against Sweden April 10. A two-time World Cup champion and Olympic gold medalist, Lloyd has been nothing short of phenomenal, and she will go down in history as a U.S. soccer legend. Persistence, resilience and skill have characterized Lloyd’s 17 years with the U.S. Women’s National Team, and she continues to embody these qualities as she contends for a space on this summer’s 18-woman Olympic roster. Lloyd will be remembered not only as an outstanding soccer player but a persistent champion of equality who deserves greater recognition in the U.S. Soccer world.

Lloyd’s 300 cap milestone highlights the longevity of her career: she is only the third person – man or woman – in the world to achieve this feat, joined only by fellow Americans Kristine Lilly and Christie Pearce Rampone. Earning her first cap at age 23 in 2005, she has been a fierce competitor since, holding an overall record of 249-15-36 in national team games. Lloyd is also known for her outstanding offensive ability and boasts 124 goals, earning her fourth place on the USWNT’s all-time top goalscorer list.

Lloyd consistently demonstrates she can thrive under pressure, rising to the challenge and scoring key goals for the United States in high-stakes matches. Her career has been so formidable that it is difficult to select just a few highlights. Nevertheless, Lloyd’s most memorable game remains the 2015 World Cup final, in which she scored a hat trick within the first 15 minutes of play, propelling the United States to a 5-2 victory over Japan.

Moving beyond her skills on the field, Lloyd is an exemplary team leader, captaining the USWNT with dignity from 2016–2020. She is also a leader off the field, spearheading the USWNT’s legal fight for equal pay alongside her teammates by filing a complaint with the Equal Employment Opportunity Commission ahead of the 2016 Olympic Games.

Lloyd has always been a shining example of the power of resilience, sharing the lessons she learned from being sidelined for much of 2020 due to both the pandemic and knee surgery in an Instagram post.

“While this was one of the most challenging moments of my career, it certainly has been the most rewarding,” Lloyd wrote. “I was able to build back my body little by little better than it was before. I have never felt better, but most importantly I have never felt happier. For as long as I play I will do it with pride and give it everything I have for my teammates every time I step onto the field.”

At 38 years old, Lloyd continues to defy expectations and shows no signs of slowing down. She remains unapologetically relentless in her pursuits and appears as good a player as ever.

Reflecting on her 300 cap milestone, Lloyd shared her commitment to constantly strive for improvement on Twitter.

“17 challenging years later and the grind is still my favorite part,” Lloyd wrote in a tweet. “The relentless pursuit of becoming better every day still drives me.”

Currently at 301 caps, if she is selected for the Olympic team, Lloyd has a decent chance at catching Christie Pearce, who earned 311 caps, for the second all-time record for international appearances in both men’s and women’s soccer. Lloyd could also challenge Kristine Lilly for the third spot for all-time goalscorers, as Lloyd currently trails Lilly’s 130 goals by six.

Lloyd has had an illustrious career, over the course of which she has seen attitudes and excitement around the game’s larger impact. She has inspired girls and boys alike in the United States and around the world; her legacy of tenacity and fierce competitive spirit will be written in the history books. Clearly, Lloyd will continue to give her all until she decides to hang up her cleats on her own terms.