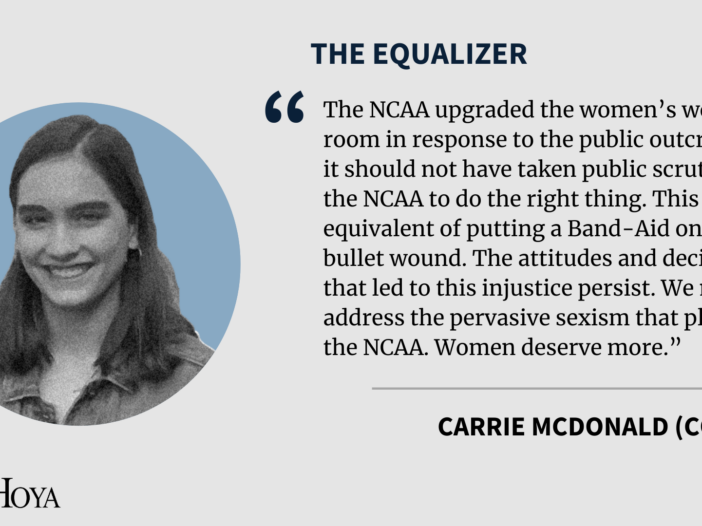 The NCAA has shown its true colors in the latest instance of mistreatment of female athletes at the NCAA Women’s Division I Basketball Tournament. This was not just an isolated incident, but rather exemplifies the lack of respect and concern shown toward female athletes by the NCAA.

After images comparing the women’s and men’s weight rooms were posted to social media by University of Oregon star forward Sedona Prince, it has become impossible to deny the blatant sexism perpetuated and condoned by the NCAA. The side-by-side images are striking; the NCAA provided the women’s isolation bubble with a few yoga mats and dumbbells, while taking the time to design a custom and fully equipped weight room for the men’s bubble.

On the one hand, I find it puzzling that the NCAA would pursue such a visibly sexist policy in the age of social media. It also remains unclear how the NCAA expected these athletes to perform at the highest level without access to what most sports fans would consider basic equipment. On the other hand, this is exactly what should be expected from an organization that has consistently failed to recognize the hard work and value of female athletes.

Since the initial backlash resulting from the weight room inequalities, additional discrepancies between the men’s and women’s tournaments have surfaced online, ranging from the quality of food to the swag bags. Most notably, University of Connecticut Head Coach Geno Auriemma, who tested positive for COVID-19 and had to miss his team’s first two games, revealed that the NCAA was using daily antigen tests in the women’s bubble, but more accurate and expensive PCR tests in the men’s bubble. This revelation was perhaps the most insulting, because it clearly revealed that the NCAA considers the health and safety of its male athletes, as well as the efficacy of the men’s bubble environment, to be of greater importance.

Discussions regarding the more visible inequalities have also led to deeper investigations surrounding hidden disparities between the men’s and women’s basketball playoff tournaments. Strikingly, the NCAA provides no payout to the women’s teams based on tournament performance, whereas it provides $2,000,000 to each men’s team for winning each game. This is yet another example of blatant sexism, given that considerable profits are generated from ticket sales and major broadcasting deals.

Some argue that these inequalities are inconsequential, and that they are just minor differences between the two tournaments. After all, shouldn’t the athletes just be grateful for having the opportunity to play during such trying times?

However, the notion that female athletes should be grateful to even be there perpetuates a common misconception that the public remains uninterested in women’s sports, when this could not be further from the truth. In fact, participation in the Women’s Tournament Challenge on ESPN has seen unprecedented growth, having increased by 103% since 2019.

The argument that these discrepancies are insignificant also has profound psychological effects on the athletes, suggesting that they are a simple afterthought in the minds of the NCAA and should be expected to accept this mistreatment and play at a high level regardless of these inequalities.

This harmful message is unacceptable not only in the interest of equality and justice, but also because of the extraordinary hard work and dedication of these female athletes. College women’s basketball players graduate at a very high rate of 93%, compared to 83% for men’s basketball players, while carrying the burden of trying to earn respect and grow their sport. They deserve to feel supported by the NCAA, but instead the organization has decided to create additional barriers by exacerbating these sexist attitudes.

Eventually, the NCAA upgraded the women’s weight room in response to the public outcry. Yet, it should not have taken public scrutiny for the NCAA to do the right thing. This is the equivalent of putting a Band-Aid on a bullet wound. The attitudes and decisions that led to this injustice persist. We must address the pervasive sexism that plagues the NCAA.

Stanford Women’s Basketball Head Coach Tara VanDerveer, the coach with the most wins in women’s basketball history, expressed similar sentiments in a statement posted to Twitter on March 20.

“Women athletes and coaches are done waiting, not just for upgrades of a weight room but for equity in every facet of life,” VanDerveer wrote. “I call on University Presidents and Conference Commissioners to demand accountability. Who made these decisions and why?”

Women deserve more. It’s time that female athletes are treated with the respect they deserve. We must hold the NCAA accountable as the fight for gender equity in sports continues.