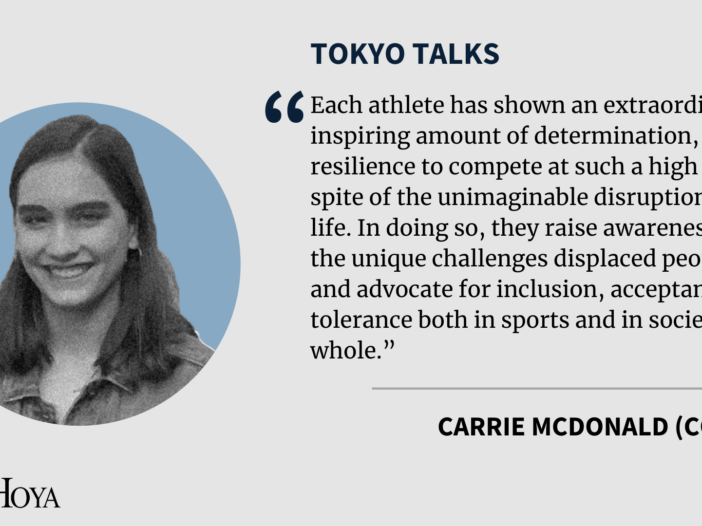 At the 2016 Olympics in Rio, 10 athletes, united not by nation but by refugee status, competed together as the first-ever Refugee Olympic Team. They inspired the world with their resilience and raised awareness about the plight of refugees after the height of the European migrant crisis, which saw thousands tragically lose their lives at sea. As the team returns to compete in Tokyo, the team brings a renewed sense of hope with aspirations for not only gold but to send an empowering message on a global scale.

The team of 29 was selected from a pool of 56 athletes participating in the Olympic Scholarships for Refugee Athletes program, which was established by the International Olympic Committee to provide funding following the success of the 2016 team. A statement issued by the IOC revealed “sporting performance,” “refugee status” and “personal background” were prioritized in the selection process to ensure “balanced representativity in terms of sport, gender and regions.”

Although no athletes from the 2016 team were able to make it onto the Olympic podium, this year’s team brings new medal aspirations. The team’s most promising chance comes from 23-year-old Kimia Alizadeh Zenozi, who in 2016 became the first woman to win an Olympic medal for Iran when she took home the bronze in the taekwondo 57 kg weight class.

Though this historic feat was celebrated, Alizadeh Zenozi fled her native Iran in January 2020 and was granted refugee status in Germany. In Tokyo, she will aim high and look to improve on her third-place finish to bring home a gold medal for the Refugee Olympic Team.

However, the success of the Refugee Olympic Team is measured by something far greater than medal count. Coming from 11 different countries of origin and 13 different host countries, the athletes serve as a symbol of peace and togetherness, defying national borders. The team serves as a beacon of hope and symbol of solidarity for the 82.4 million people — including 35 million children — who have been forcibly displaced from their homes around the world.

In a statement congratulating the athletes on their selection to the team, UN High Commissioner for Refugees Filippo Grandi highlighted the athletes’ strength of character and emphasized that they serve as an example of what refugees around the world are capable of when given the chance to succeed.

“Surviving war, persecution and the anxiety of exile already makes them extraordinary people, but the fact that they now also excel as athletes on the world stage fills me with immense pride,” Grandi wrote. “It shows what is possible when refugees are given the opportunity to make the most of their potential.”

Regardless of the final standings and medal count, the athletes on the Refugee Olympic Team are the strongest embodiment of the three values of Olympism: excellence, friendship and respect. Each athlete has shown an extraordinary and inspiring amount of determination, grit and resilience to compete at such a high level in spite of the unimaginable disruption to their life. In doing so, they raise awareness about the unique challenges displaced people face and advocate for inclusion, acceptance and tolerance both in sports and in society as a whole.

Carrie McDonald is a rising sophomore in the College. Tokyo Talks appears online every other week.