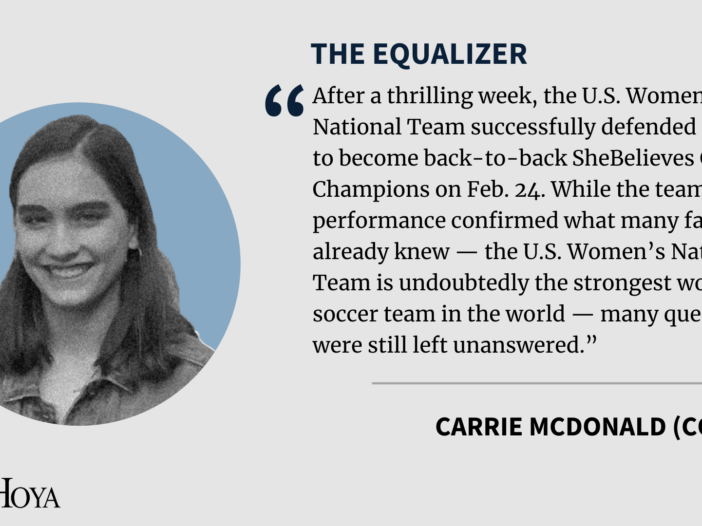 While the team’s performance confirmed what many fans already knew — the U.S. Women’s National Team is undoubtedly the strongest women’s soccer team in the world — many questions were still left unanswered.

The USWNT has not lost a game in over two years since the team fell to France in January 2019 with a 3-1 scoreline. Yet the team has looked far from unbeatable at times. Although it defeated Canada 1-0, Brazil 2-0 and Argentina 6-0, it foolishly left itself vulnerable at times, giving up goal-scoring opportunities to the opposition that stronger teams would have likely converted.

Ultimately, the United States still won all of its games and became the first team in SheBelieves Cup history to not concede a single goal. This impressive feat reinforced the team’s position at the top of women’s soccer.

It was a similar story for the offense. The United States failed to score against Canada until the 79th minute, when a strike from midfielder Rose Lavelle found the back of the net. Although the United States had lost regular starters in forward Tobin Heath and midfielder Sam Mewis to injury, Canada was down several key players, including star forward Christine Sinclair.

The offense’s slow start raised additional questions about the United States’ performance, which did not earn the satisfaction of Head Coach Vlatko Andonovski, who now has an impressive 16-0-0 record with the national team.

“When we create 10 opportunities to score and we score one, I’m disappointed,” Andonovski said in a post-match conference. “On top of that, if we allow any shots to goal, I’m not going to be happy. One of the things that makes me happy from a defensive standpoint is that they didn’t break us down to create the opportunity. … We made mistakes and they created opportunities.”

The offensive line managed 29 shots against Canada overall, nine of which were on target. The team just needs to improve on its execution. Naturally, this will come with time as the 2021 National Women’s Soccer League preseason begins and players acclimate to a full training environment after a turbulent year. The United States improved as the tournament went on, scoring six goals out of 26 shots against Argentina in its final game.

Furthermore, this was a constructive tournament for the United States. At this point in the team’s quest for the Olympic gold, imperfection is advantageous; the athletes will undoubtedly return to their club teams and focus on eliminating these weaknesses.

While the tournament did not provide any concrete answers surrounding the ever-elusive Olympic roster, it did, however, highlight just how difficult Andonovski’s decisions will be. It is no secret that the United States enjoys unmatched depth. Yet, Andonvski must shrink his familiar 23-woman roster to just 18 for the upcoming Olympics.

With only 16 outfield players on the roster, each player must be able to contribute something special to the team. It will be interesting to see how Andonovski balances youth and experience going forward.

Many veteran players — such as midfielder Carli Lloyd and forwards Megan Rapinoe and Alex Morgan — proved they were still in contention after taking extended time off in 2020. Rapinoe led the tournament with three goals. Lloyd was perhaps the fittest we have ever seen her, creating many opportunities and triggering the devastatingly effective forward press. Morgan proved she should not be left out of the conversation, scoring her 108th career international goal against Argentina. This marked her first goal since giving birth in May 2020.

Women’s soccer has recently seen a trend of exponential growth, and this SheBelieves Cup was no exception. The much-anticipated United States-Brazil game attracted 568,000 viewers, making it the third-most-watched USWNT game in history outside of the World Cup.

Ultimately, this tournament answered the most important question: is the USWNT still deserving of its No. 1 FIFA ranking? The trophy won by the United States team at the end of the tournament seems to suggest it is. However, a clear 18-woman roster did not emerge from the experiments with the lineup. Andonovski faces a tough decision ahead, yet it is a decision every coach wishes they could make. Personally, I am excited to see the direction Andonovski will take and how exposure at the Olympics will accelerate the growth of women’s soccer.