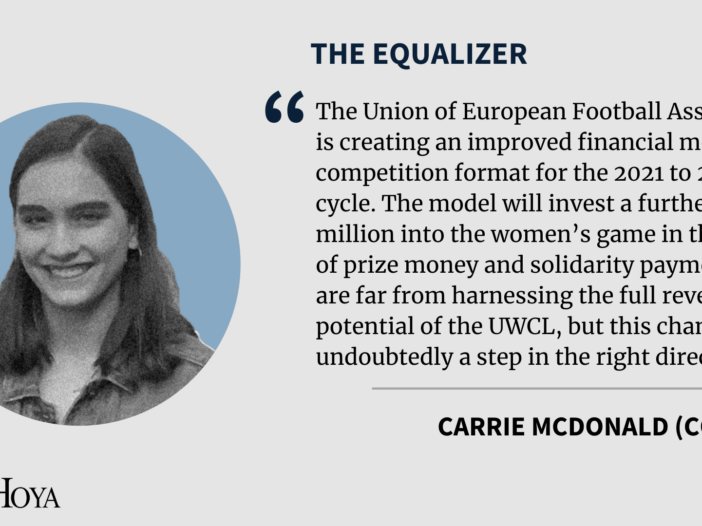 As women’s soccer experiences unprecedented growth, the Union of European Football Associations is creating an improved financial model and competition format for the 2021 to 2025 cycle. Although still a far cry from equal pay in professional soccer, this development is an important step toward fostering long-term, sustainable growth for blossoming professional women’s leagues.

The model will invest a further 24 million euros into the women’s game in the form of prize money and solidarity payments. This change marks a fourfold increase from the current figures. The money will be sourced from improved media deals and an anticipated post-pandemic increase in ticket sales.

This amount of money is a far cry from the 460,000 euros the UEFA Women’s Champions League champion Olympique Lyonnais received in 2019. Yet these figures are still dwarfed by those of the men’s UEFA Champions League, where the top 32 teams automatically receive 15.25 million euros for qualifying and a multi-million bonus for each win.

UEFA also estimates that 23% of the 24 million euros will be awarded as solidarity payments to all top-division clubs in countries that enter teams in the Women’s Champions League. These are the first of their kind in the women’s game, although they have been an established feature in the men’s for years, and the payments are a long-overdue step for developing women’s soccer at the ground level.

Although increased interest in women’s soccer will boost ticket sales, women’s soccer suffers from a lack of investment and attention. Consequently, it remains far from reaching its full potential.

Women’s soccer enjoys less investment, broadcasting opportunities and sponsorships than men’s soccer clubs, leagues and competitions. While the 2018 Men’s World Cup logged a total viewership of 3.572 billion people, the Women’s World Cup recorded a total viewership of just 1.12 billion viewers. Yet the current disparity in revenue cannot be used as a reason to justify a pay gap. Women’s club teams have been chronically underfunded for years, with athletes having to pursue supplementary jobs that detract from training.

The prioritization of developing women’s soccer leagues is also mirrored in a series of rule changes. For example, clubs will now be permitted to have a B-list from which they can bolster squad lists with young players. This will be supplemented by increases in protections for pregnant athletes and their clubs, granting clubs the freedom to change their squad list at any point to cover maternity leaves.

The additional structural changes to future the competition format will mirror that of the men’s with the introduction of a group stage; the current women’s competition is a 32-team knockout tournament. This will increase geographic diversity by ensuring clubs from at least 10 countries reach the final 16 through the creation of separate champions and leagues paths.

The UWCL’s structural changes come along with a new plan to centralize marketing and broadcasting to increase the visibility and commercial value of the UWCL. Currently, only the final is marketed by UEFA, severely limiting the games’ revenue potential. We are far from harnessing the full financial power of the UWCL, but this change is undoubtedly a step in the right direction.

This is an exciting time for women’s soccer in Europe. Women’s teams are proving over and over that they are able to thrive in response to increased investment and opportunities, and while this new plan is an encouraging development in the women’s game, women must continue to demand more to achieve equal pay and opportunity.