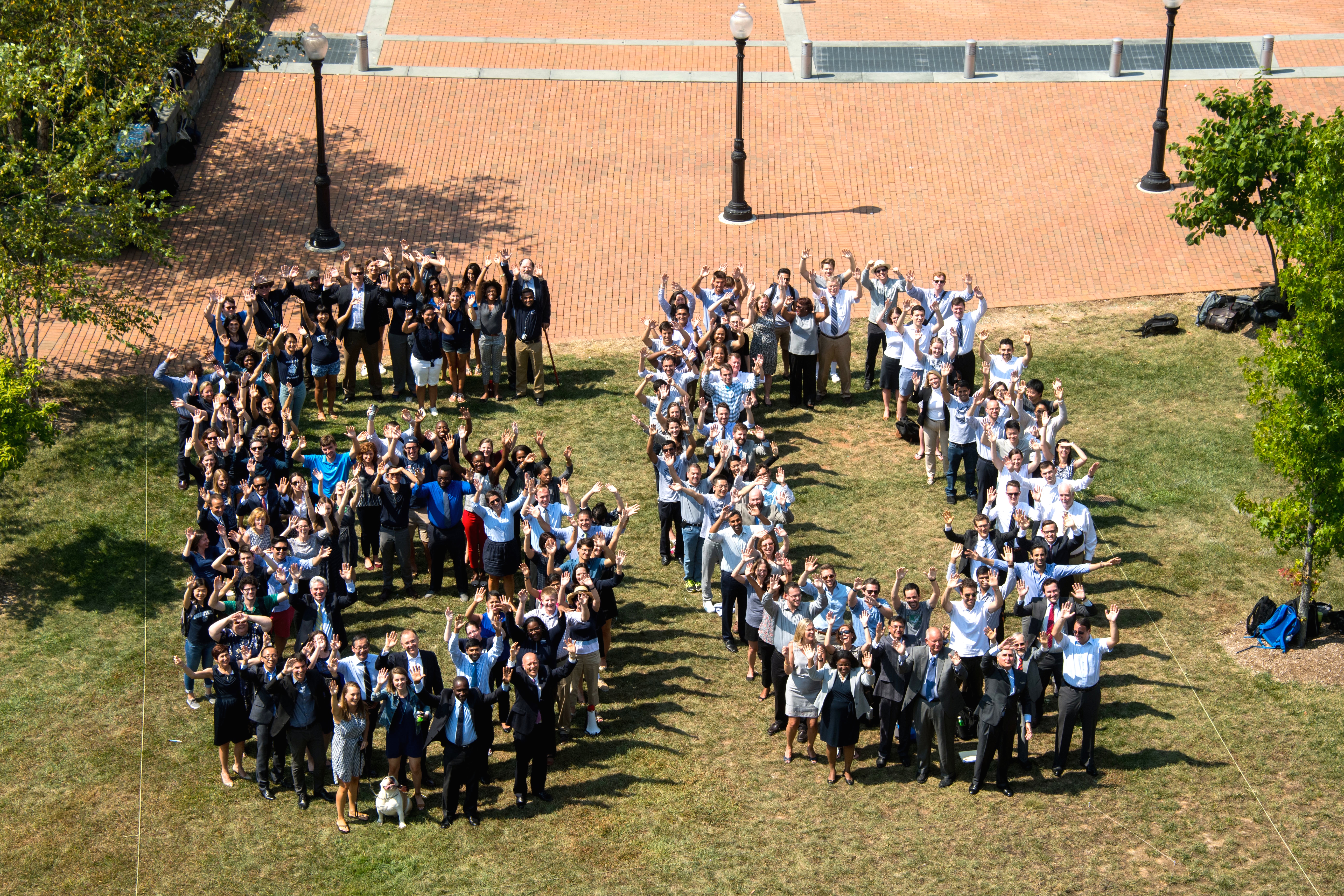 The McDonough School of Business began celebrating its 60th anniversary Wednesday with a photo-op and ice cream social outside of the Rafik B. Hariri Building.

About 150 MSB students, faculty, staff and alumni participated in the event, including Interim Dean Rohan Williamson and Jack the Bulldog. The group crowded together on Regents lawn in the 90-degree weather to form a large human number ‘60’ before adjourning for ice cream.

Associate Dean and Chief Marketing Officer of the MSB, Chris Kormis, co-chair of the 60th Anniversary Committee, said the event was an effort to involve the entire business school community in commemorating a significant milestone for the institution.

“We are thrilled about celebrating our 60th anniversary and we are looking for ways to involve our whole community, our students, our faculty, our staff, our alumni,” Kormis said.

Williamson, a finance professor appointed to serve as interim dean in August, said he is proud to be at the head of the MSB on this anniversary, using the occasion as an opportunity to reflect on the school’s accomplishments.

“I began teaching at Georgetown’s McDonough School of Business nearly 20 years ago – it has been rewarding to see the school grow and accomplish so much in just that timeframe, let alone the last six decades,” Williamson wrote in an email to The Hoya. “I am humbled to be our leader during this pivotal year.”

Founded in 1957, and created as an outgrowth of the School of Foreign Service under University President Edward Bunn, S.J., the business school is the youngest of the university’s four major schools. The institution began offering a full-time MBA program in 1983, and was renamed the McDonough School of Business in 1998 in honor of the alumnus Robert Emmett McDonough (SFS ’49).

Today the MSB enrolls 2,333 undergraduate and postgraduate students and is currently ranked 18th in Bloomberg Businessweek’s list of the top undergraduate business school programs in the U.S.

The photo opportunity was the inaugural event of a series of festivities and initiatives that will continue until December 2017, including speaker events, a memorabilia showcase, special coverage in Georgetown Business Magazine, social media efforts and a video contest, which begins next month.

Kormis said further ideas for anniversary events are welcome through her office, and stressed that even though much of the planning for the anniversary occurred without student involvement, students will soon be invited to serve on the 60th Anniversary Committee.

“A lot of the activities came together this summer when students weren’t here,” Kormis said. “But we’ve had some students respond to our requests to be on the committee and we’ll be sending out invitations to them soon.”

Business Reference Librarian Jennifer Boettcher (MBA ’05), who has been an employee of the MSB for 19 years, said she is pleased with the school’s trajectory during her tenure.

“It’s gone up in rankings, it’s just getting better and better,” Boettcher said. “I think we have a strength, I think we have a great alumni service and I only see it—well how much better can it be? That’s my only question.”

Williamson expressed that even in a time of reflection on past achievements and celebration, the entire MSB community should think about future accomplishments and continue to pursue excellence.

“While it’s fun to be nostalgic and look back, I hope we can all look forward,” Williamson wrote in an email to The Hoya. “I want us to think about what the McDonough School of Business will look like over the next 60 years and how we can continue to lead innovation in business schools and higher education.”

Ari Sahu (MBA ’18), who recently entered the MSB for study in pursuit of a position in finance or investment banking, said he was excited to participate in the event, and to be a member of the MSB community.

“Well it’s a great feeling, I just started like a month back and it has been a whirlwind for me…but I believe the brand of MSB will be taking me far down the road when I am looking for a job or networking or meeting people all over the world for MSB, so I am really excited about it.”

Jeremy Bernard-Sasges (MSB ’20) said he sees a chance for this milestone to promote the school’s distinction moving forward.

“It’s an incredible opportunity that we’re freshmen and entering into this 60th year and to have the opportunity to change and to influence and to move past that 60-year mark,” Bernard-Sasges said.