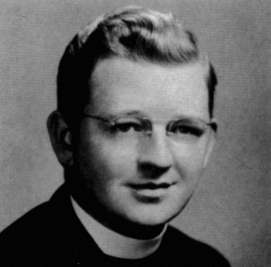 Anthony McGinley, a Catholic priest from Pennsylvania, sexually abused young boys for 30 years, according to a 2018 report on clerical abuse published by a Pennsylvania grand jury. For five of those years, he taught courses in child psychology at Georgetown University.

From 1977 to 1981, McGinley taught graduate classes in orthodontic statistics each fall and child psychology each spring, according to the archived schedules of classes from those years. He is also listed as a lecturer in orthodontics in telephone directories from 1977 to 1987, the year the church prohibited him from celebrating Mass.

Sexual abuse allegations against McGinley, who was ordained in 1945 and died in 2006, were deemed credible by the Diocese of Harrisburg, Pa., in August 2018.

Multiple young boys were sexually abused by McGinley between 1953 and 1982, according to the report, which documented priests in Pennsylvania whose accusations of sexual abuse were covered up by church officials in the state.

Georgetown has not acknowledged McGinley’s time at the university, which overlaps with his reported period of abuse, since the grand jury report was released in August. The university did not comment on when it first learned of the allegations against McGinley.

While working at Georgetown from 1977 to 1987, McGinley also taught psychology, sociology and education at Marymount College, now Marymount University, in Arlington, Va., from 1972 to 1982, according to Marymount’s archived schedules of classes. His courses included “Psychology of Maturing,” “Seminar in Testing and Assessment of Children,” and “Pupil Evaluation: Tests and Measurements.”

The first accusations against McGinley came in 1953 from three male students at Lebanon Catholic High School in Lebanon, Pa. They alleged McGinley brought them on overnight trips and provided them with alcohol before sleeping in the same bed as them and touching them in a sexual manner.

When the students told a priest stationed at the school of McGinley’s “immoral advances” toward them, they were told to keep silent about the incident and instructed about the “gravity” of the charges they were making, according to the report. After a conversation with George Leech, then the bishop of Harrisburg, McGinley was transferred to Our Lady of Mount Carmel, a Catholic church in Mount Carmel, Pa.

As a result of these incidents, McGinley was sent to the St. Luke Institute Catholic treatment center in Maryland by Bishop William Keeler in 1987 and lost the ability to perform pastoral duties, such as celebrating Mass or hearing confession, according to the grand jury report.

The center at St. Luke housed pedophiles in need of psychiatric treatment, according to Jason Berry, a reporter and author who has written extensively on the sexual abuse crisis in the Catholic Church.

“Most mental hospitals have their share of horror stories, people who act out,” Berry said in an interview with The Hoya. “Some people are just sick and do not meld comfortably with society.”

After his time at St. Luke, McGinley was caught working as a priest near Allentown, Pa., violating the order he received in 1987, according to the report.

Two accusations were brought against McGinley after he lost the privilege of celebrating Mass.

In 2004, a man reported to the Diocese of Harrisburg that McGinley had molested him when he was 11 years old and McGinley was assigned to the Annunciation Blessed Virgin Mary in McSherrystown, Pa., where he worked as a minister from 1945 to 1953.

McGinley also served as the director of Campus Ministry at Marymount University and celebrated Masses through the art program throughout his time at the school, delivering opening prayers and homilies at services, according to Marymount’s archived church programs.

Because he died before any allegations were made public, McGinley faced no criminal charges during his lifetime.