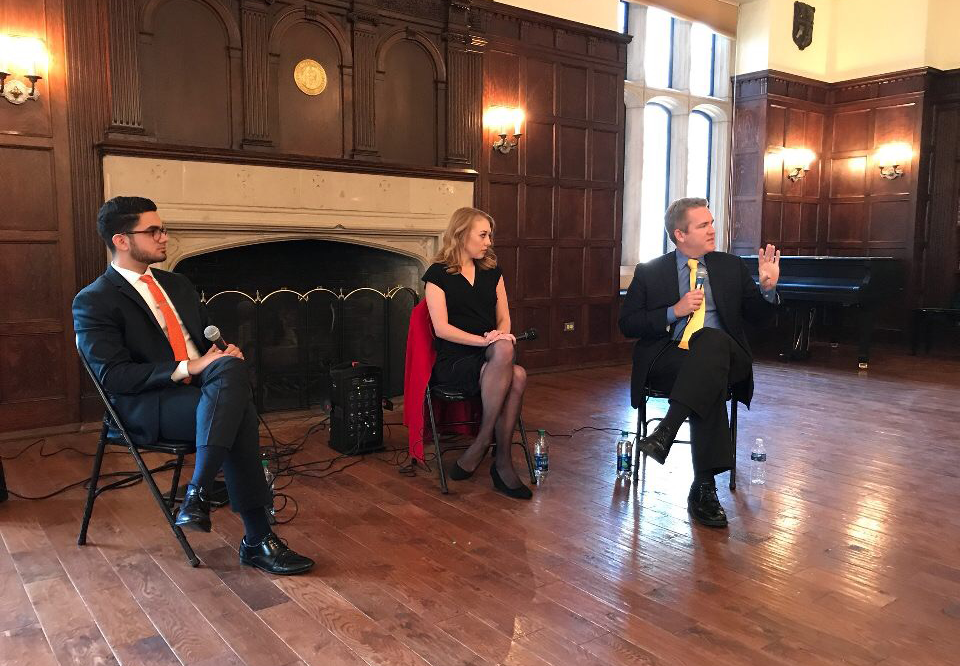 Political journalists must push through a climate of distrust created by politicians and the public alike, argued Bob Cusack, editor-in-chief of The Hill, and Sarah Westwood, the Washington Examiner’s White House correspondent, at an event in Copley Formal Lounge on Oct. 27.

Moderated by The Hoya’s Managing Editor Jesus Rodriguez (SFS ’19), the discussion, titled “Political Journalists: Those Who Brave the Swamp,” was jointly organized by The Hoya, the Georgetown University College Democrats, the Georgetown Bipartisan Coalition and the Lecture Fund.

Cusack said his publication takes precautions to safeguard against perceived bias in political reporting when prompted by a POLITICO/Morning Consult Poll that found 46 percent of voters believe the news media fabricates stories about President Donald Trump and his administration.

“We don’t make up stories,” Cusack said. “We don’t make up sources, and if they do, a lot of journalists have been caught on that. You just have to write the news in a way that people think is fair. And sometimes that can be difficult because reporters, whether it’s right or left, do have biases, and they might write things subconsciously, especially in the heat of a presidential election year.”

Westwood said although Trump’s actions are partly responsible for the media’s heightened scrutiny of his administration, the overall objectivity of political coverage has been compromised since Trump’s campaign.

This problem of bias persists, with media seizing opportunities to discredit the Trump administration. Westwood said.

“We have seen several instances where the media as a whole have run with narratives as it relates to President Trump that are the most negatively skewed narratives that you could possibly have,” Westwood said. “After we transitioned, the White House purged all the content on the Obama administration’s whitehouse.gov website so they could put up their own information. That’s something that happened in the digital age every transition. But it was reported in almost every major newspaper that the White House is purging the EPA website and wants to scrub climate science from the Internet.”

Cusack said the nature of news has radically changed since he joined the industry in the late 1990s. The digitization of the newsroom has introduced the need to create pre-written versions of stories for immediate release online, such as a version of an election result article in which Clinton won out over Trump.

“We attract ads from consumers or McDonald’s, and we attract ads saying, ‘This bill is terrible, vote it down,’” Cusack said. “We are a for-profit company, so we want to make money, but we also want to do good journalism.”

To make political stories about complex policies intelligible to the public, Westwood said reporters must strive to incorporate a human element that captures how legislation will personally affect individuals nationally.

“Health care is one really great example, where there has been a lot of good reporting done looking at families that would have been affected by the repeal of Obamacare,” Westwood said. “The human element is usually important, and you can find it in every policy, but it’s important to include anecdotes from both sides of the aisle.”

Cusack said newsrooms must continue to preserve the truth rather than to preserve journalists’ egos to reestablish the public’s trust.

“You have to have principles in your newsroom of being fair, of not being snarky,” Cusack said. “A lot of time, we tell reporters, ‘Listen. You don’t need to write it with an attitude.’ You have to commit your newsroom to just writing it straight and letting readers decide one way or another.”