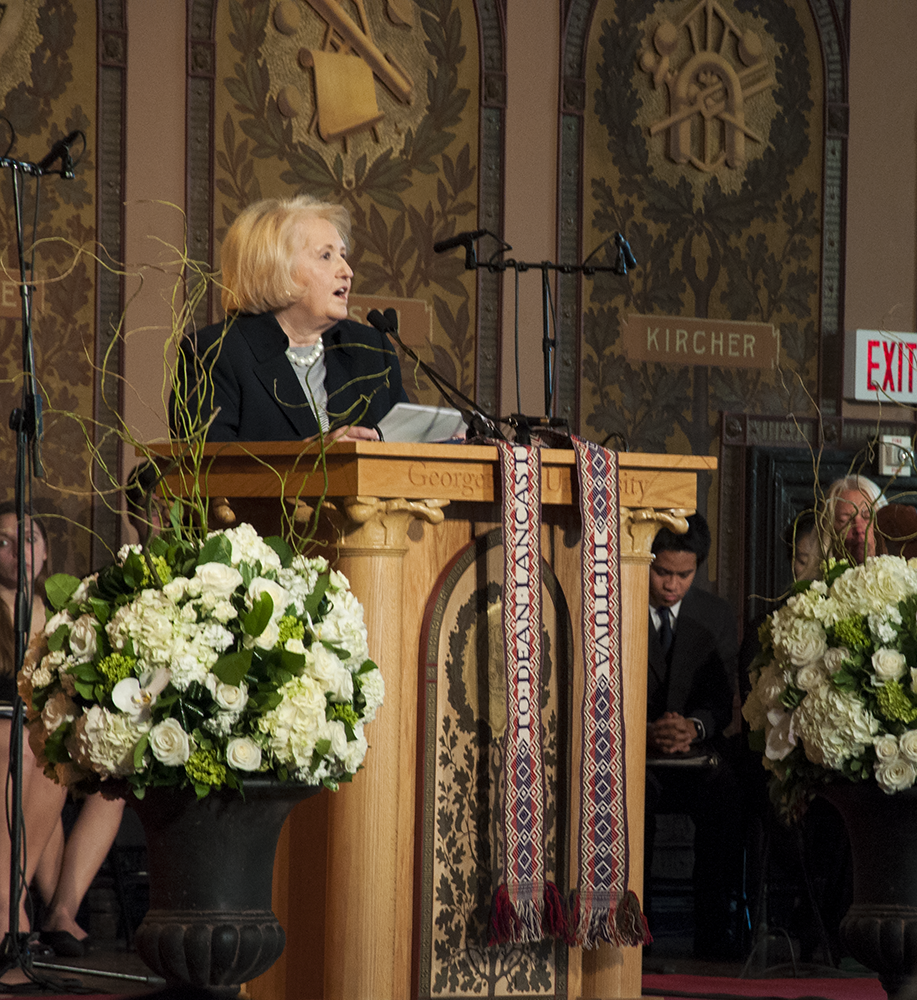 The university community honored the life of School of Foreign Service Dean Emerita Carol Lancaster (SFS ’64) with a memorial service in Gaston Hall on Sunday. Lancaster, who died Oct. 22, was remembered for her wit, remarkable intelligence and endless dedication.

Vice President for Mission and Ministry Fr. Kevin O’Brien, S.J., began the memorial with a prayer service. O’Brien spoke about Lancaster’s impactful actions, both in government and on Georgetown’s campus.

“Her development could never be separated from the human,” O’Brien said. “It was not simply an academic exercise, but a human endeavor. Her generation, her coming of age imbued in her a sense that she could change the world, making God’s dream for this world a reality.”

According to O’Brien, Lancaster instilled a sense of duty in her students to make changes like she had.

“Carol told her students that ideas matter,” O’Brien said. “That all we do here is meant to make a difference out there, beyond the gates, in the city which she so loved, in a world which she knew very well. As Dean, she embodied the Jesuit commitment to educating for justice.”

“Her life was characterized by the slow and arduous effort of integration and encounter,” DeGioia said. “The arc of Carol’s life demonstrates this commitment to people-building: in Bolivia, in her writing, in government service and in her work here at Georgetown.”

DeGioia said that Lancaster’s work both in public service and on campus will inform scholars and policymakers for years to come.

“Carol lived a life, an extraordinary life, with such actions,” DeGioia said. “Actions that generated new processes—new processes and people-building. Actions that bore fruit throughout her life, and will continue to bear fruit in significant historical events.”

One of Lancaster’s notable actions was the creation of the Institute for Women, Peace and Security, led by Executive Director Ambassador Melanne Verveer (FLL ’66, GRD ’69). Verveer, who spoke at the service, said that Lancaster dedicated herself to the creation and development of the center, becoming a pioneer in women’s issues academia.

“[Lancaster] established a first of its kind institute to become a premier center for research on these issues, to provide significant opportunity for students to become engaged and to utilize Georgetown’s global platform to put a spotlight on today’s pressing challenges and opportunities,” Verveer said. “Yes, Carol was a visionary. She had a dream that Georgetown would become a leader on these issues, and she knew she had strong support from President DeGioia.”

According to Verveer, Lancaster’s dedication to the institute turned it into a life-changing program for both students and women all over the world.

“She leaves a giant footprint for good,” Verveer said. “In expanding the university’s leadership, in deepening research and scholarship in these areas, in inspiring a cadre of students to become engaged and in transforming the lives of women who were on the front lines of change around the world.”

Various administrators including SFS Interim Dean James Reardon-Anderson, who served as Lancaster’s senior associate dean, and Georgetown College Dean Chester Gillis, a close friend, also spoke about their relationships with Lancaster. The Georgetown University Chamber Choir sang hymns punctuating the event, opening with “Amazing Grace.” Lancaster was an avid harpist, and her teachers, a Celtic harp and guitar duo, played some of her favorite compositions, including “Simple Gifts.”

Before Fr. John Langan, S.J., delivered the closing prayer, the service featured a video of compiled clips of Lancaster at speaking events, showcasing her trademark humor, and closed with an address from her son, Douglas Farrar (SFS ’05, GRD ’12).

“We want to remember her for her humor, her intelligence, her caring devotion and her wit,” Farrar said. “Time will heal us, but you can help. … Share the memories you treasure most about Carol with each other and with us. By remembering the best of her, we can all keep her spirit alive even though our hearts ache from her loss.”