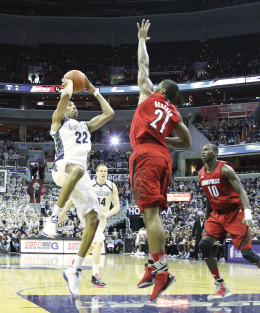 Sophomore forward Otto Porter Jr. snagged his 12th rebound of the game, pulled the ball close to his chest and drew a foul with 1.4 seconds left that all but put away one of the most exciting games at Verizon Center in recent memory in a 53-51 win.

Georgetown fans should be used to close wins against Louisville now, though.

The Blue and Gray have been on the winning end of every contest with the Cardinals since 2009, eking out a victory in each of the last three years. Incredibly, since joining the Big East, Louisville has a winning record against every conference opponent except for one — Georgetown.

The key to the Hoyas’ success, once again, was a difference in shooting.

Even though Georgetown has committed more turnovers than its opponent in each of its five wins against Louisville, the Hoyas have managed a higher field-goal percentage in every contest. Both of those trends continued Saturday, but — as with so many other games this season for John Thompson III’s team — it wasn’t pretty. TheHoyas, who shot below 40 percent themselves, held the Cardinals to just 34.8 percent from the field and their lowest point total of the entire year.

So the defense once again pulled through for the Hoyas, who forced 13 turnovers and held Louisville to 27.3 percent from beyond the arc. There’s not much left that needs to be said about the defense. Even without suspended sophomore forward Greg Whittington, arguably the team’s best defender, individual players stepped up and combined to provide outstanding team defense.

But perhaps nobody was more impressive in that category than junior guard Markel Starks, who held Big East preseason player of the year Peyton Siva scoreless. The Louisville point guard committed four fouls in just 23 minutes on the floor.

“You don’t want to make it mano a mano, but at some point you have to take pride in playing defense,” Starks said at the post-game press conference. “At some point or another, you have to just say, ‘I need to defend.’”

But despite stellar defense, Georgetown still succumbed to the same offensive lapses that have plagued them all year. After scoring 27 points in the first 13 minutes of the game, Georgetown struggled for the rest of the half, managing only six points — four of which came on free throws.

The difference? Once Louisville committed to a full-court press followed by a zone defense in thehalfcourt set, Georgetown began to settle for long three-point shots; of the Hoyas’ five field-goal attempts in the last seven minutes, four of them were from beyond the arc and none went in. The only made basket came by way of a put-back from junior forward Nate Lubick made possible by a missed three-pointer from Starks.

The Cardinals regularly switched between man-to-man and zone defense in the second half, and the frequent changes paid off. Georgetown recorded just 20 points — and more importantly, just one assist — in the second half. If not for clutch shots from Starks and Porter Jr. — as well as the highlight of the game, an acrobatic tip-in from redshirt sophomore guard Aaron Bowen that proved to be the winning basket — Georgetown would have emerged on the wrong end of the tight contest.

The Hoyas have been unable to consistently break the zone, and until they find a way to do so, they will likely have to rely on their defense to win big games.

Thompson III has tried a variety of players in the middle of the zone, including sophomore forward Mikael Hopkins, Porter Jr., Lubick and freshman guard D’Vauntes Smith-Rivera, but none has been effective in minimizing turnovers and converting from the field consistently.

Other offensive trends are troubling as well. For one, Georgetown turned the ball over 16 times and can count itself fortunate that those turnovers only led to 15 points; seven of those turnovers came at the hands of Porter Jr. Despite Smith-Rivera’s defensive strides, he shot just 10 percent from the field and chipped in only five points. And, perhaps most importantly, a weak interior presence allowed Louisville several offensive rebounds that eventually gave the Cardinals a brief lead.

After all, wins of any variety are hard to come by in this league, and any should be lauded. When they come against a tough Louisville team that was hungry for a win after dropping two straight, that’s just gravy.

Still, with an upset-minded Seton Hall team coming down to the Phonebooth on Wednesday, this is no time to bask in Saturday’s afterglow. It can’t be emphasized enough: Saturday’s win was impressive, but Georgetown must now find the consistency that has eluded it all season if the team wants to make a run in March.

“You literally have to play well every night or you’re going to lose in this league,” Thompson III said. “This is a very good win against an outstanding team.”