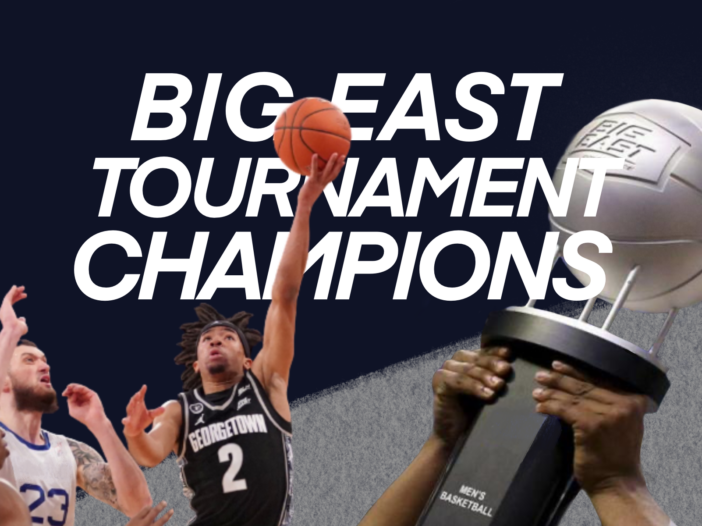 Eight minutes into the Big East Tournament championship, it looked as though Georgetown’s Cinderella story was coming to an end. The Creighton Bluejays had fresher legs, looked more talented and executed more effectively on both ends of the floor in the opening minutes. Then, in a microcosm of Georgetown’s entire season, the Hoyas responded with a 46-8 run, draining contested shots and stifling the Bluejays defensively.

Ultimately, Georgetown dominated Creighton and won the Big East Tournament championship with a 73-48 victory over the Bluejays.

Eighth-seeded Georgetown (13-12, 7-9 Big East) struggled early on, missing open three-pointers and committing sloppy turnovers. Second-seeded Creighton (20-8, 14-6 Big East), meanwhile, looked to enjoy continued success following its semifinal win over the University of Connecticut. Creighton’s star point guard Marcus Zegarowski assisted on an alley-oop to kick off the game and then converted on two jumpers of his own. The Bluejays grinded their way to a 13-6 lead with 12:33 remaining in the first half.

First-year guard Dante Harris played the offense the Hoyas needed to curb the Bluejays’ strong start. After a steal from senior forward Jamorko Pickett, Harris hit his signature midrange jumper from the top of the key. He followed up the shot by finding senior guard Jahvon Blair open in transition for a three-pointer. This spark allowed the Hoyas to claw back into the game.

After Zegarowski hit another jumper to tie the game at 18 points with six minutes left in the first half, Georgetown rattled off 18 unanswered points to close out the half. Blair primarily led the offensive attack, putting together an 8-point streak that included two three-pointers. On defense, staying active in the passing lanes, boxing out for defensive boards and forcing turnovers gave the Hoyas a 36-18 lead going into the second half.

Despite a second-wind effort from the Bluejays, the Hoyas continued to dominate in the second half. Led by graduate forward Chudier Bile, whose strong play has aided the Hoyas all season, Georgetown maintained its lead all the way to the Big East Tournament title.

Though every player contributed to the Hoyas’ win, Harris put together a complete game with 10 points, eight rebounds and five assists. Harris earned the Dave Gavitt Trophy as the tournament’s most outstanding player. Bile stepped up and provided a crucial offensive performance. Although he missed his first three attempts of the game, he recovered well, scoring 19 points along with eight rebounds on the day.

The gravity of this win cannot be understated. For a Georgetown fan base that has only known heartbreaking losses and despair in recent years, this win was a reminder of the program’s potential and its history. Led by now Head Coach Patrick Ewing (CAS ’85), the 1984 Hoyas reigned victorious in the national title game. Ewing’s athletic career as a Hoya occurred during what many consider to be the glory days for the team, as the Hoyas also made national title appearances in 1982 and 1985.

After the transfer of several players last season and a midseason postponement due to a COVID-19 outbreak within the team, this victory was a reward for Georgetown’s resilience and teamwork. For Ewing, this win was a response to the criticism and uncertainty that have surrounded his career as a head coach.

Coach Ewing has been no stranger to adversity as a coach. His Georgetown Hoyas were picked to finish last in the conference in the annual Big East preseason poll, and his tenure as head coach has been met with doubt as the Hoyas have struggled year after year. Now, Ewing proudly watches his team win its first conference title in over a decade.

Fans also fondly remembered former Head Coach John Thompson Jr. throughout this tournament run. The 2021 season was Georgetown’s first since Thompson’s passing in August 2020. The Hoyas claimed their eighth Big East championship title on the same day their most legendary hero was hired 49 years ago.

Adversity and narratives aside, the championship drought is over. The Georgetown Hoyas are the Big East champions.

After the game, Coach Ewing expressed the pride he felt for his team.

“Hoya nation, stand up and be proud,” Ewing said in a postgame interview with ESPN.

The Hoyas, however, are not done yet. They will make their first NCAA Tournament appearance since 2015 on Saturday, facing off against the University of Colorado (22-8, 14-6 Pac-12) at 12:15 p.m. More Georgetown basketball is to come.