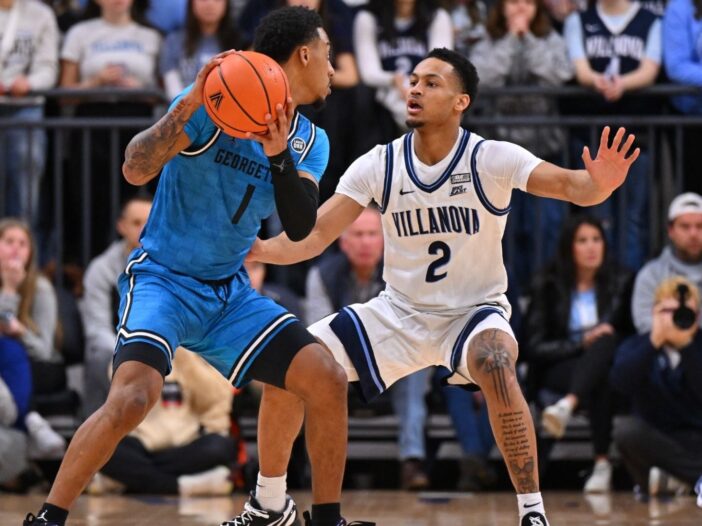 Despite a promising chance to win its first game against a Big East opponent since March 13, 2021, the Georgetown University men’s basketball team fell to the rival Villanova University Wildcats 73-77 on Jan. 16.

Down by 1 point with just 30 seconds left on the clock, sophomore guard Primo Spears had the opportunity to take the lead for the Hoyas. But as he drove left, Villanova forward Brandon Slater managed to poke the ball away straight into the hands of star Wildcat forward Cam Whitmore, who threw down a monstrous slam-dunk on the other end to put Villanova up by 3. With one more chance to tie the game, a tough rainbow triple attempt from sophomore guard Brandon Murray hit the rim, sealing the game for the Wildcats.

The Hoyas (5-14, 0-8 Big East) mounted an impressive team effort against the uncharacteristically struggling Villanova Wildcats team (9-10, 3-5 Big East), who had lost its prior three games. Though Georgetown put up one of its better team performances of the season, shooting 54% from the field and dominating the rebound battle 33 to 21, the Wildcats continuously earned points off turnovers while fouls plagued the Hoyas.

Villanova came out of the gates hot, hitting its first 4 shots. However, sophomore guard Jordan Riley, who earned a start despite Murray’s return from injury, matched the Wildcats’ run with one of his own, scoring 9 early points with an emphatic putback dunk.

Though Riley took fewer shots throughout the rest of the first half, Spears picked up the scoring, hitting tough shots in isolation and bringing the score differential down to 1 point near halftime. However, a clutch 3-pointer by Villanova guard Mark Armstrong left Georgetown down 33-37 at the break.

Just as he did in the first half, Riley propelled Georgetown’s offense early in the second, making great reads without rushing the game. He converted on a number of smooth mid-range shots to tie the game at 42 a piece.

However, the Wildcats would not relent. In typical Villanova fashion, they scored and drew fouls with arrays of pump fakes to keep themselves in the game.

From there on out, it was the “Primo Spears show.” The sophomore delivered pinpoint passes, including a dime to senior center Qudus Wahab, who threw down a vicious dunk. Georgetown eventually took a 71-69 lead off of a fading mid-range jumper by Spears. However, clutch time offense was a struggle for the Hoyas — aside Spears and free throws from Murray, the team struggled to score. Meanwhile, Villanova continued to convert from the charity stripe while creating good looks in the paint and on the perimeter.

Though the Hoyas only registered 13 turnovers, close to their season average of 12.7 per game, Villanova capitalized by scoring 18 points off of those opportunities.

The Wildcats also attempted 31 total free throws, 22 of which came during the second half, as several of the Hoyas got themselves into foul trouble. Though the Wildcats shot just 10 from 22 from the field in the second half, these free throws kept them within striking distance. The Wildcats’ defense in the clutch moments ultimately gave them the edge, holding Georgetown scoreless from the field in the final two minutes of the game.

Despite the nail-biting loss, there were some positive takeaways. Spears looked confident in his decision-making and shot selection during many moments, though he did register a team high of 7 turnovers. Riley also continued to impress, scoring 18 of Georgetown’s points with a field goal shooting accuracy of 66.7% . Similarly, sophomore forward Bradley Ezewiro is proving to be a valuable rotation piece, leading the team with 7 rebounds and 3 blocks, 2 of which came in pivotal moments down the stretch.

Georgetown continues its road trip against No. 8 Xavier (15-3, 7-0 Big East) on Jan. 21 in yet another tough matchup for the Hoyas.