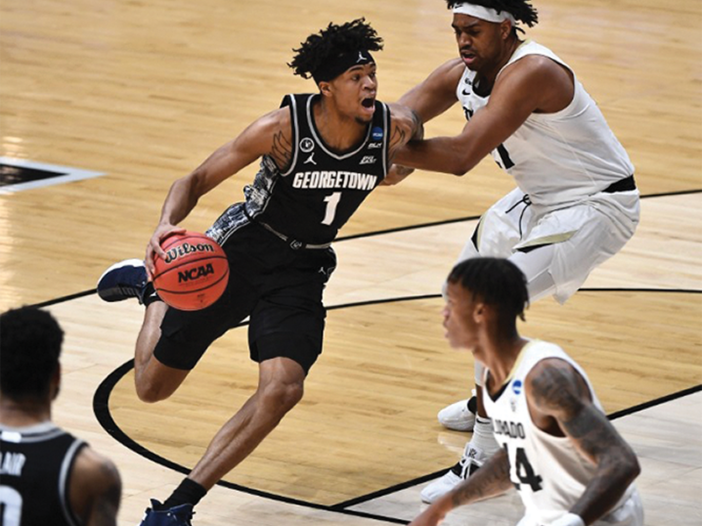 Colorado won the tipoff and immediately turned it over to the Hoyas, leading to an easy layup for graduate forward Chudier Bile. First-year guard and Big East Tournament MVP Dante Harris quickly made his presence known as well, hitting a buzzer-beating three-pointer as the shot clock expired. After four-and-a-half minutes of play, the Hoyas were down just 9-7.

The Buffaloes then went on an 8-0 run, prompting a timeout by Ewing with 12:01 left to play in the first half. Following the timeout, graduate guard Donald Carey drew a foul on a three-point shot and knocked down all three free throws to end the Hoyas’ scoring drought.

Colorado forward Jabari Walker killed Georgetown early on with 14 points in the first half, shooting 4-of-4 from behind the arc. With roughly seven minutes left in the first half, Walker jumped at a pump fake by sophomore center Timothy Ighoefe near the basket. As Ighoefe went up for the layup, Walker intentionally grabbed him by the collarbones and dragged him to the ground — a move that was ruled a flagrant one after review. A flagrant two would have disqualified Walker from the game, but the referees controversially ruled it as a flagrant one, which does not carry an ejection.

As Ighoefe shot his free throws, Walker taunted him following a miss — an act deserving of a technical foul in its own right. While the taunting may not have changed the outcome of the referees’ decision, it is hard to imagine the game would have finished the way it did had Walker been ejected. He would finish with a game-high 24 points.

The Buffaloes continued to shoot well from the three-point line, hitting 11 of their first 17 three-point shots to give them a 47-23 lead over the Hoyas as they headed into halftime. Georgetown struggled to find its shooting rhythm early on, hitting just one of its first nine three-point shots and shooting 46.2% from the free-throw line in the first half. With Colorado’s score more than doubling Georgetown’s going into the half, the Hoyas’ poor shooting effort put them in a near-inescapable hole.

The Hoyas played to the Buffaloes’ level in the opening minutes of the second half. A steal leading to foul shots by senior forward Jamorko Pickett was followed by a media timeout with 15:54 left to play in the game. The energy in Hinkle Fieldhouse overwhelmingly favored the Buffaloes as the Hoyas struggled to retake momentum after their tough first half.

Despite the deficit, Georgetown never stopped fighting — a testament to the toughness the team has shown all season. The Hoyas brought out a full-court press that led to a three-pointer and foul shots as the Buffaloes struggled to bring the ball up the court, committing multiple turnovers.

Following a timeout, Colorado figured out Georgetown’s press, scoring 13 unanswered points. Down 84-52 with 6:18 left to play, the Hoyas’ comeback chances seemed lost as the Buffaloes refused to miss.

First-year guard T.J. Berger checked into the game with just over six minutes left to play to try to improve the Hoyas’ three-point shooting and make a comeback.

With time ticking down, the game only became further out of reach for Georgetown. As the buzzer sounded, the scoreboard read 96-73 and the Hoyas returned home to Washington, D.C. with a first-round loss.

Sophomore center Qudus Wahab led the team with 20 points and 12 rebounds in an impressive performance. This loss likely marks the last game for senior guard Jahvon Blair, Pickett, Bile and Carey, all of whom will go out as Big East champions. After the game, however, Carey indicated he will likely be back next year, as the NCAA allows players an additional year of eligibility in light of the COVID-19 pandemic.

Despite the season-ending loss, Ewing still chose to highlight the strength of his players in a postgame press conference in Indianapolis.

“Overall, I am very proud of our guys,” Ewing said. “Naturally, I am disappointed in the outcome and disappointed that we didn’t play our best game, but I also have to take my hat off to Colorado. They played an outstanding game.”

Despite the disappointing finish, the Hoyas have still exceeded all expectations this season. They are Big East Champions, regardless of how they fared in the NCAA Tournament and will continue to build on this season for years to come. With one of the nation’s best recruiting classes coming in the fall, Hoya fans have a lot to look forward to.