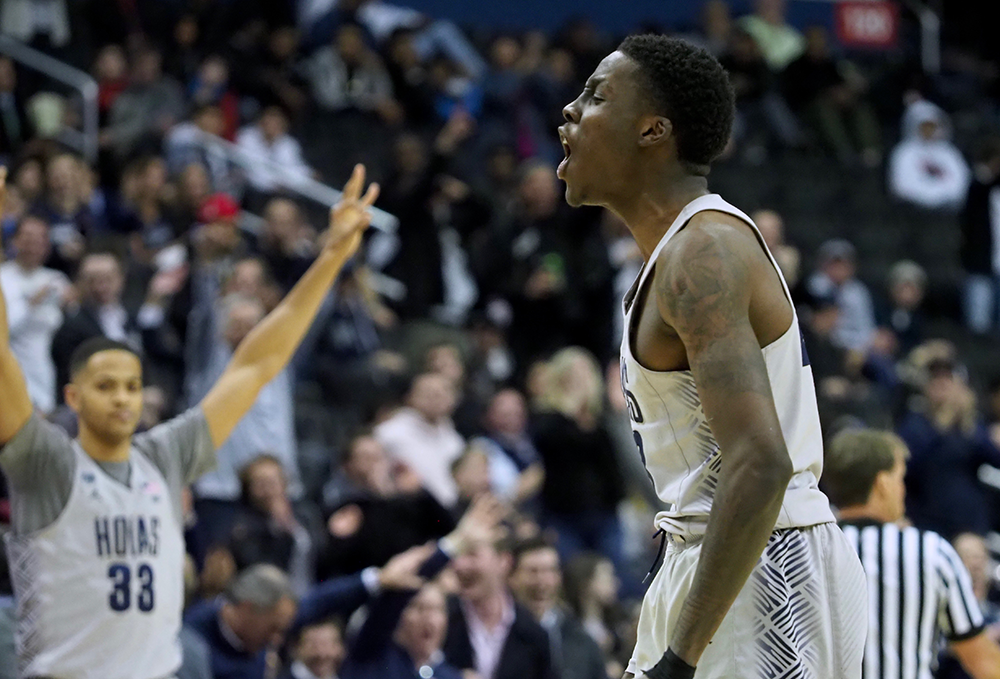 In front of a crowd of over 20,000 people, including U.S. Vice President Mike Pence and Hall of Famers Alonzo Mourning and Dikembe Mutombo, the Georgetown Hoyas fell to the visiting Butler Bulldogs in a tight, crucial conference battle. Butler was able to hold off the late game charge by the Hoyas as Georgetown closed the gap to within two points with just under three minutes remaining in the game.

Freshman guard Mac McClung continued his dominant play, dropping a game-high 21 points, while sophomore forward Jamorko Pickett added 18 points of his own. Despite the solid play from both McClung and Pickett, Butler sophomore forward Jordan Tucker refused to let the Hoyas back in the game with his 15 points and five rebounds — most of which came at crucial times late in the game. With the 73-69 loss, Georgetown (15-9, 5-6 Big East) sits tied for third in the Big East with St. John’s (17-7, 5-6 Big East) and Butler (14-10, 5-6 Big East).

Head Coach Patrick Ewing (CAS ’85) talked about his team’s struggles late in the game in front of the Hoya faithful.

“I’m disappointed that at home in front of one of the largest home crowds we’ve ever had, we were unable to come through with the win,” Ewing said.

McClung began the game with a pair of buckets but was outmatched by Butler’s 9-2 run. However, Pickett knotted the game at 11 when he scored on a dunk and a triple.

The next six minutes of the game featured a back-and-forth battle between the Bulldogs and the Hoyas led by freshmen forward Josh LeBlanc and McClung. Butler refused to concede their early lead when they went up on a pair of jumpers from Butler junior guard Kamar Baldwin, who scored six of his 18 points for the game as he put Butler up 29-24.

Senior center Jessie Govan scored 12 points in the game for the Hoyas and added two important triples late in the first half to cut the deficit to 33-31. Butler ended the half with a three-pointer and went to the locker room with a six-point advantage. Georgetown struggled from the field, shooting just 38 percent in the first half as opposed to Butler’s 48.3 percent. Butler also remained hot from downtown, shooting 40 percent from three when Georgetown could only drop 25 percent of their three-pointers.

Butler continued its solid first-half shooting performance with a pair of triples to open the second half and extend their lead to double digits. McClung netted a pair of free throws and found Pickett for a triple to bring the deficit to five. The Hoyas and Bulldogs continued to exchange jumpers, but the lead was again brought to within five when McClung hit a corner three, bringing the crowd to its feet.

Butler once again fended off the Hoya crowd’s cheering in Capital One as they continued to score jumpers, bringing their lead back to double digits at 62-51. With under 10 minutes to play, the Hoyas started a comeback led by senior forward Kaleb Johnson’s deep three-pointer and graduate forward Trey Mourning’s fast break slam to close the gap to six points. Pickett then netted another three to cut the lead to three points with 4:25 minutes remaining in the closely contested match.

The second unit played an important role in tightening the score gap in a postgame conference, according to Ewing.

“Our bench did a phenomenal job of fighting and clawing and they got us back in the game,” Ewing said.

Following a great performance from Georgetown’s second unit, the starters failed to find the net in the next three minutes of the game. Missed shots from Govan and McClung allowed Butler to maintain their lead at three points until Pickett finally cut the lead to two by making a free throw. With the clock expiring, the Hoyas were forced to foul. Butler stood up to the loud Capital One fans once again and converted their free throws to close the game with a  73-69 score.

McClung is hopeful the Hoyas will convert more opportunities in their upcoming matches.

“We had a bunch of opportunities and next time we have to deliver. Now it is important to keep our heads up and get back in the gym,” McClung said.

Ewing later commented on Georgetown’s chances to win the game down the stretch, as multiple good looks at tying the game did not fall.

“As poorly as we played, we had an opportunity to win the game. That really hurts,” Ewing said.

Georgetown will face off against Seton Hall Wednesday, Feb. 13, with the tipoff scheduled at 8:30 pm on FS1. The Blue and Gray enters the final month of basketball season as they hope to keep their tournament dreams alive.